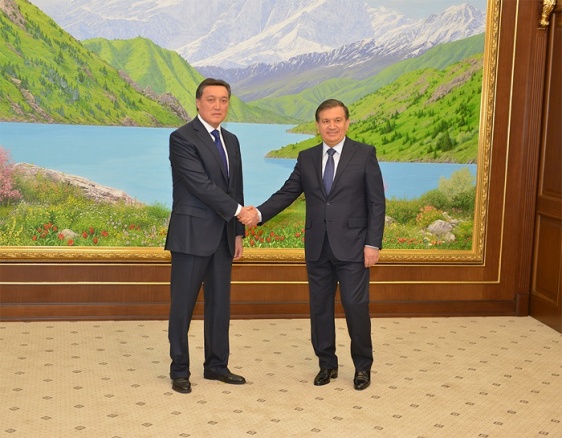 “Kazakhstan is the largest strategic trade partner of Uzbekistan in Central Asia,” Mirziyoyev said, noting the two countries are entering a new stage of economic cooperation.

According to a press release from the Kazakh government, Mamin said Kazakh President Nursultan Nazarbayev attaches great importance to relations with Uzbekistan and that cooperation has allowed the opening of joint trading houses in agribusiness, chemicals and the petrochemical industry. Mamin also noted the importance of cooperation in tourism and the automotive and petrochemicals industries and joint agreements to open bus and air routes. An Almaty-Tashkent high-speed railway and an increase to six flights a week between the capitals are expected to launch soon.

After the talks, Mirziyoev awarded the Dustlik (Friendship) Order to Mamin for great contributions in the development of mutually beneficial relations between Uzbekistan and Kazakhstan, his personal contribution to the expansion of cooperation between the two countries in the field of railway transport, as well as participation in major projects of interregional transport corridors in Central Asia.

At the meeting of the joint intergovernmental commission, the participants stressed that the development of industrial cooperation and joint investment projects should be the main focus of cooperation between the regions.

“We are ready for active cooperation with Kazakhstan and implementation of joint projects. The expansion of interregional cooperation will certainly contribute to the intensification of trade-economic and investment cooperation,” First Deputy Prime Minister of Uzbekistan Ochilboi Ramatov said.

The Kazakh and Uzbek delegations discussed bilateral cooperation in energy, customs, oil and gas, transport and transit, tourism, scientific and technical, the cultural and humanitarian spheres, as well as cooperation in military and military-technical fields.

The growth in the transportation of goods by rail between Kazakhstan and Uzbekistan in 2016 to 19 million tonnes was also noted. The parties agreed to limited transportation tariff discounts for Kazakh grain through Uzbekistan, and Uzbek fruits, vegetables and other agricultural products through the territory of Kazakhstan.