By Dmitry Lee in International on 6 February 2017

ASTANA – Plans for the third stage of modernisation announced by Kazakh President Nursultan Nazarbayev Jan. 31 were praised by Indian Ambassador Harsh Kumar Jain in a recent interview with The Astana Times. 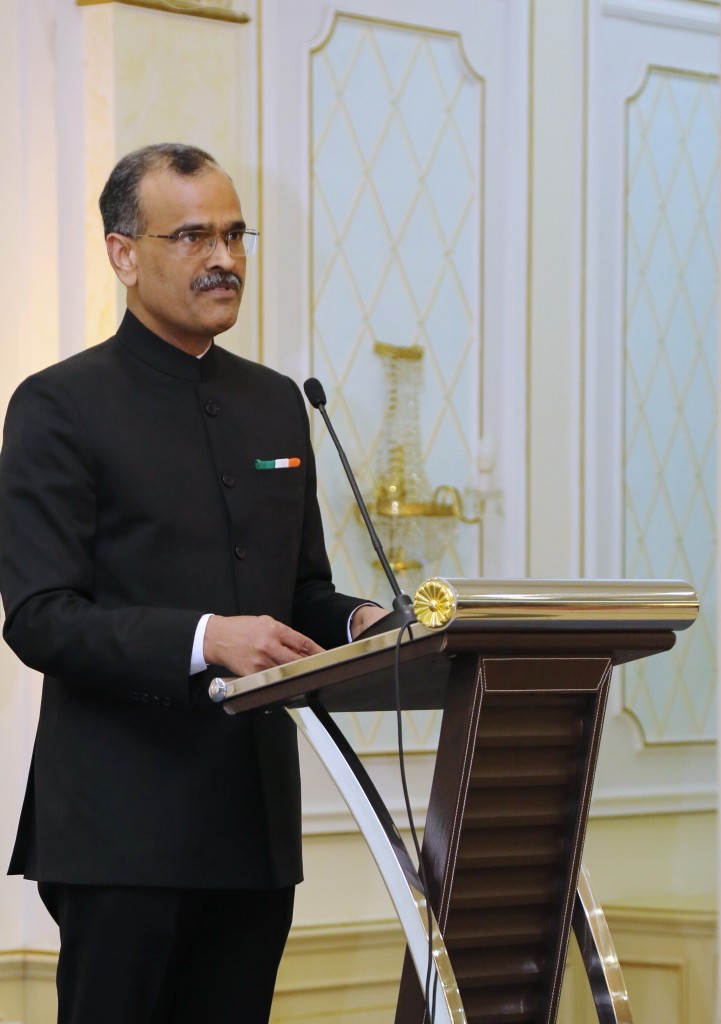 “I am impressed by the way President Nazarbayev has developed a vision for the country and that vision is being implemented though well-conceived practical strategies,” he said, speaking of the country’s progress in a span of 25 years. “The Nurly Zhol economic policy, The Plan of the Nation and the recent announcement to redistribute powers among various branches of the government would put Kazakhstan on a new stage of economic development and progress, modernisation, political democracy and prosperity. Kazakhstan is making wise investments in human capital, too, that would pay it rich dividends in the future.”

The Indian diplomatic mission celebrated the 68th Republic Day Jan. 26 and the ambassador noted the mission is readying to mark 25 years of diplomatic relations between the countries later in the year.

“We will organise a series of activities dedicated to the celebration of the 25th anniversary of the establishment of diplomatic relations between the two countries in Kazakhstan as well as India. The first such series of events would be a mixed Indian and Kazakh cultural performance by the Centre of Indian Classical Dances on March 11 in Almaty, on March 25 in Chennai and on March 28, 29 and 31 in New Delhi.”

The embassy hosted a flag hoisting ceremony in the early morning of Jan. 26 on its grounds in the city and hosted an evening reception at the Radisson Hotel the next night. Around 300 guests, including heads of diplomatic missions and international organisations, Kazakh senior government officials, journalists, representatives of academic and cultural institutions, members of the Indian community and Indian Technical and Economic Cooperation (ITEC) and Indian Council for Cultural Relations (ICCR) alumni attended the reception, according to the ambassador.

Bilateral relations last year focused primarily on building the momentum generated by the visit of India’s Prime Minister to Kazakhstan in July 2015.

“Prime Minister Narendra Modi and President Nazarbayev met briefly in April in Washington D.C. and again in June 2016 in Tashkent. The Chief Minister of one of our most dynamic states, Andhra Pradesh, visited Kazakhstan in July and Deputy Foreign Minister of Kazakhstan Akylbek Kamaldinov attended the Heart of Asia-Istanbul Process Ministerial Conference held in the month of December in Amritsar in India,” he said.

Jain noted India supported Kazakhstan’s candidacy in the run for non-permanent membership on the UN Security Council. He added the countries have participated in several cultural exchanges.

“The Centre of Indian Classical Dances in Almaty celebrated its tenth anniversary in March, the two countries held the first joint military exercise, Prabal Dostyk, in September, India organised the festival of India in four cities in Kazakhstan in the month of October and the fourth India-Central Asia dialogue was held in New Delhi in December.”

The announcement of India’s participation in EXPO 2017 has attracted quite a bit of media attention in his nation, noted the ambassador.

“People in India are quite curious about the expo in Astana. India’s participation in the SCO (Shanghai Cooperation Organisation) Summit that is going to be held on the eve of the opening of the expo would provide further publicity of the exhibition in India. If it is marketed well by the tourist operators and a simplified visa and registration procedure is introduced for visitors to the expo, it may attract a large number of Indian tourists,” he said.

The Indian Trade Promotion Organisation (ITPO) is the main agency responsible for India’s participation. It is in regular contact with expo organisers and has discussed various aspects related to the concept and design of the country’s pavilion.

“The construction of the pavilion, as well as the commercial area allocated for other activities such as catering, handicraft showrooms et cetera, is expected to commence by the end of this month. The embassy is also planning India’s national day celebration (the 70th anniversary of India’s independence on Aug. 15), holding the third International Day of Yoga and several other cultural activities at the expo,” said Jain.

Entering the third year of his assignment, the ambassador noted his impressions of Kazakhstan.

“I have travelled to several parts of the country including Almaty, Aktobe, Semey, Ust-Kamenogorsk, Atyrau and Temirtau and plan to visit a few more cities in the next few months. I have also visited places of tourist interest like Borovoye, Charyn Canyon and Tamgaly Tas. All the places have their own charm and beauty. Kazakhstan is a beautiful country. It has a small population, but rich culture. Given our historical linkages, it has a lot of cultural similarities with India. The country has made impressive socio-economic progress in the last 25 years and has taken several regional and international initiatives that have enhanced its international standing and prestige,” he said.