By Zhanna Shayakhmetova in Nation on 14 February 2017

ASTANA – Empowerment of Women in the Corporate Sector, an international forum held Feb.10 in the capital, highlighted the involvement of women in Kazakh business. 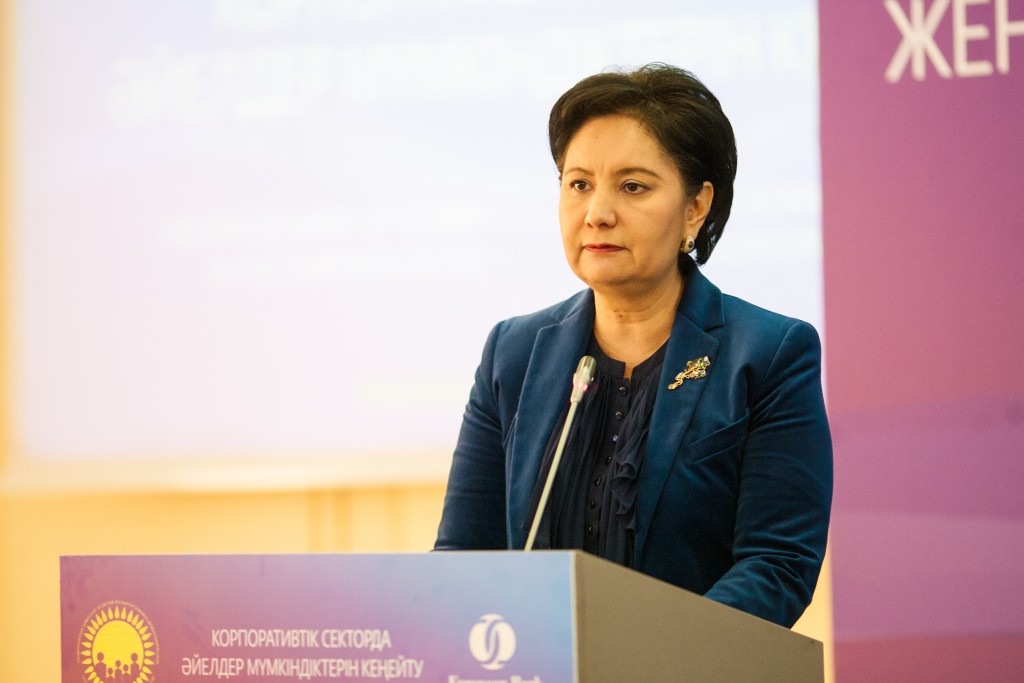 Of the more than 570,000 enterprises in the nation, 44 percent of small and medium-sized enterprises (SMEs) are run by women. The businesses provide 31 percent of all jobs in the SME sector and in the past three years, 32 percent of loan recipients have been women, said Secretary of State Gulshara Abdykalikova.

Members of the National Commission for Women, Family and Demographic Policy and Parliament, heads of state bodies and  national companies, foreign ambassadors, representatives of international and non-governmental organisations, as well as Kazakh and foreign experts attended the forum.

In his Jan. 31 address to the nation “Third modernisation of Kazakhstan: global competitiveness,” President Nursultan Nazarbayev noted the country has entered a new era of development, said Abdykalikova. In response, there is a need to improve and expand the business environment.

“Much depends on SMEs headed by women. Participation of women leaders in social processes have a positive impact on the quality of administrative procedures and increase competitiveness. Women should also take part in the creation of innovative start-ups as one of the drivers of the knowledge-based economy,” she added.

Women-owned business is supported through national programmes and agreements between the government and international development institutions including the European Bank for Reconstruction and Development (EBRD), United Nations Development Programme (UNDP), World Bank and UN Women. 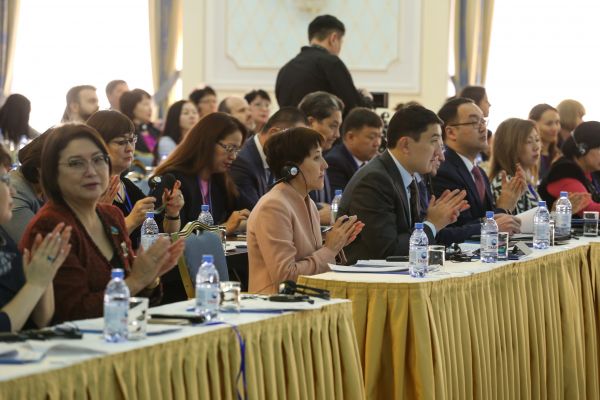 “A model of gender relations has a significant effect on the stability of the family according to the international practice. The higher level of gender equality leads to greater responsibility, parity and fulfilment of domestic, economic, moral and educational functions by family members,” said Abdykalikova.

More than four million families currently reside in Kazakhstan and the nation has conducted systematic work on creating the necessary conditions to strengthen them. The family and gender policy up to 2030 was adopted by a presidential decree.

“The proportion of women totals 27 percent in the Mazhilis (lower house of Parliament), whereas it stood at 10 percent in 2006. According to the World Economic Forum, Kazakhstan took 48th place among 144 countries on women in Parliament in 2016,” said the Secretary of State.

There is also a growing tendency of women’s involvement in industrial production, the oil, gas and energy sector and innovation and infrastructure development, especially in top management. The share of female employment in the oil and gas industry accounts for 18 percent, the nuclear industry, 22 percent, and the electricity industry, 27 percent. Approximately 340,000, or 30 percent, of the nearly one million people working in heavy industry are women.

EBRD has supported the way the Kazakh government provides equal rights and opportunities for both men and women in the economy and in society at large. According to EBRD’s Chief Counsellor for Social Issues Michaela Bergman, the private sector is a great catalyst for promoting economic growth. 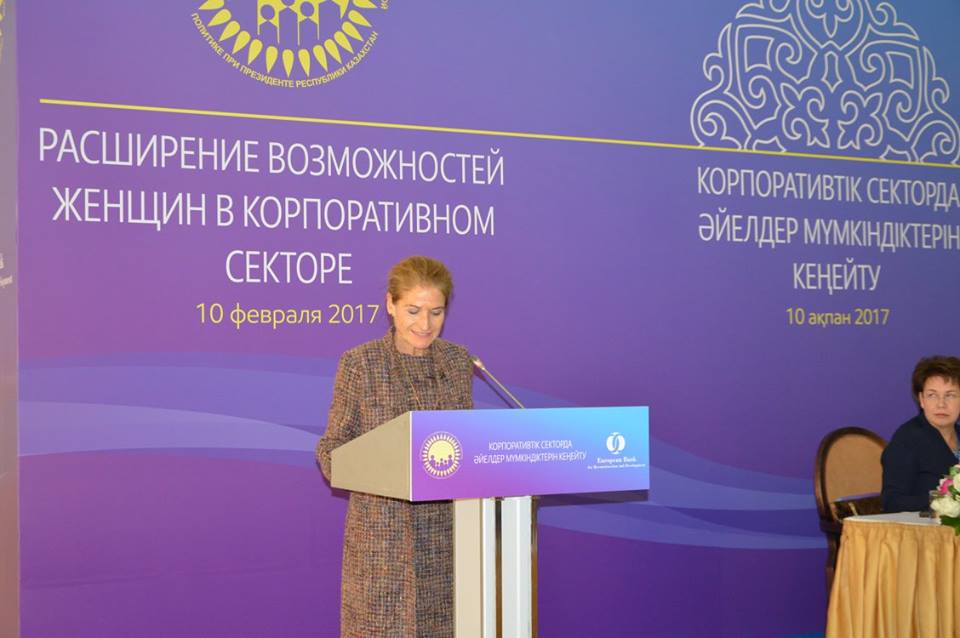 “We work with our clients to see how we can increase the number of women in the workforce and then also to increase the number of women in decision-making roles. We worked with the Almaty Bus Company, where we found there were no women because of a regulation that prevents women from being bus drivers. We worked with the client and the government to see how we can get a desperate dispensation from that regulation. In Kazakhstan, there are 255 types of jobs that women cannot do because of legislation and some of these legacy laws probably need to be reviewed,” Bergman told The Astana Times.

Extensive research shows that diversity in decision-making and risk are good for a company, because differing views result in an approach that is not as uncertain.

“Women provide a different point of view, different approach. Women are a good way of increasing the diversity in decision-making roles and therefore it will be good for businesses to have more women in decision-making roles. We are trying to promote women in non-traditional areas of work, for example in oil or mining and in other areas because they are poorly represented everywhere in the world. We think that working in Kazakhstan, which has a huge sector on this area, will be a very good role for the rest of the world,” she said. 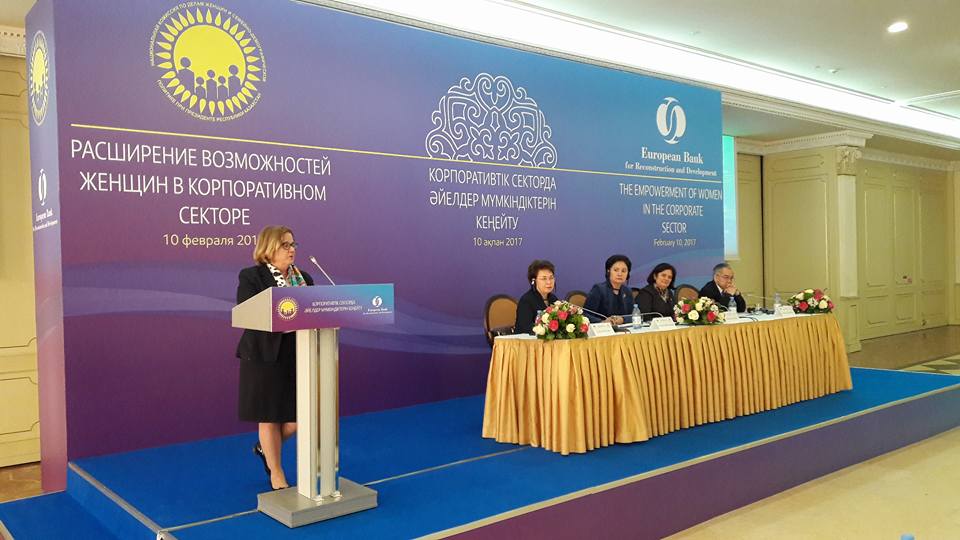 “It is a very contemporary document and first of its kind in the private sector potential to intensify efforts to promote gender equality. Women entrepreneurs are well represented by EBRD’s projects. Our flagship project is the Women in Business programme in Kazakhstan, which supports women entrepreneurs through both access to finance and advisory services. This is EBRD’s first and largest Women in Business programme in Central Asia, with $50 million already dedicated and channelled through the partner banks. The government of Kazakhstan and EBRD have a lot in common in the part of history of promoting gender equality and we will continue doing so, because we strongly believe in the potential to improve women’s economic opportunities wherever we invest,” Heckman said at the forum.

Issues on protecting the rights and interests of women entrepreneurs, experience in promoting women in non-traditional sectors, gender aspects in the corporate and private sectors and gender-sensitive planning were also discussed as part of the roundtable meeting.