ASTANA – The Kazakh capital hosted Feb. 22-23 the EXPO 2017 third international participants’ meeting, the main and final event on the eve of the international specialised exhibition. 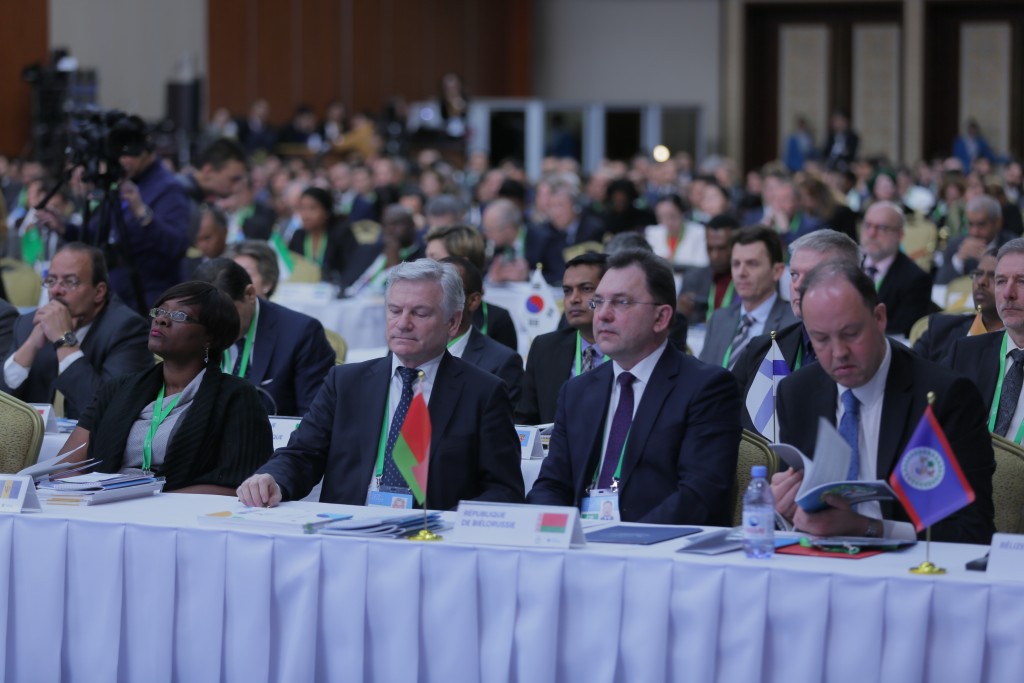 Three hundred and twenty-six delegates from more than 100 countries attended the two-day meeting and were informed on preparations for the exhibition. The meeting included detailed presentations regarding the expo’s organisation and logistics, as well as question-and-answer sessions, providing organisers and participants a common platform to exchange information.

Secretary General of the Bureau International des Expositions (BIE) Vicente Loscertales addressed the participants in his opening speech, praising the level of preparation for EXPO 2017 and expressed confidence in its success.

“I want to thank the organisers of the exhibition, who approached all stages of preparation with great responsibility, bringing us to its final stage. Now I am sure that our joint efforts will lead us to success,” Loscertales said. 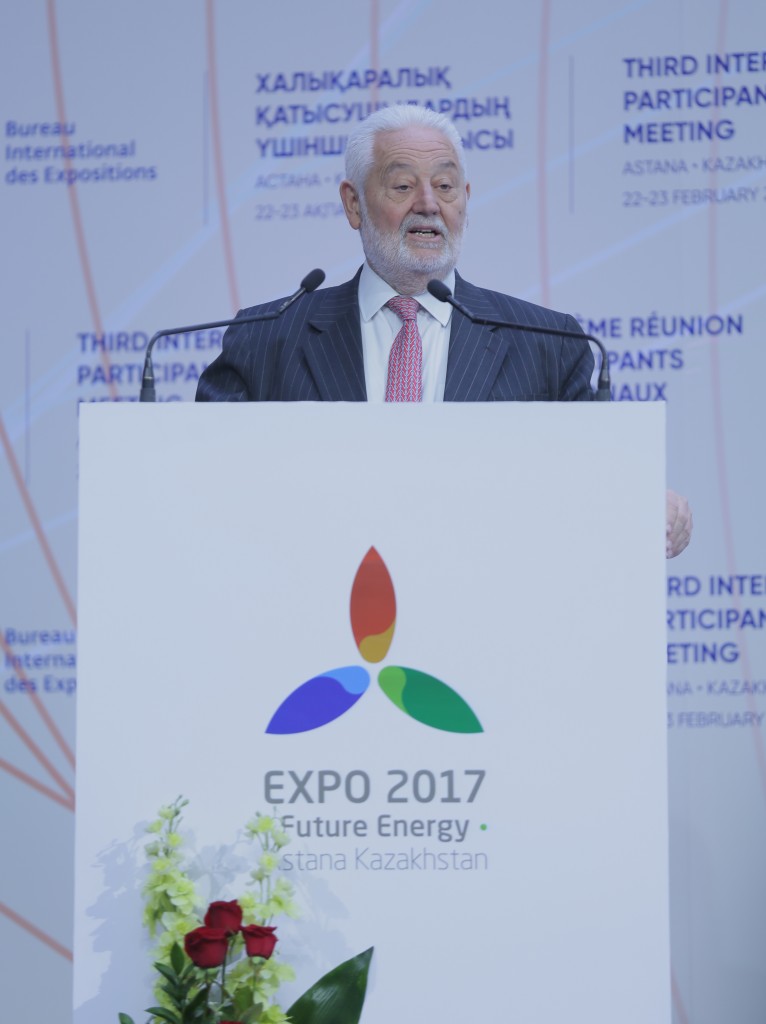 He also emphasised the importance of the “Future Energy” theme and its relevance across the globe, which is reflected in the high number of international participants.

First Deputy Prime Minister of Kazakhstan Askar Mamin addressed delegates at the opening of the meeting, alongside Chairman of the Board of Astana EXPO 2017 Akhmetzhan Yessimov, Kazakhstan’s EXPO Commissioner Rapil Zhoshybayev and Akim (Mayor) of Astana Asset Issekeshev.

Yessimov noted that the pavilions are being commissioned to international participants for further installation works. Many countries have already started construction.

“Only 108 days are left before the exhibition, that is why we are calling on the rest of the participants to activate their work on installing the pavilions,” he said.

For the convenience of the exhibition participants, guidelines on various operational fronts were developed. A Unified Service Centre that provides visa support, tax, banking, insurance and other services of state bodies of Kazakhstan was launched. The organisers also introduced the Accreditation information system that minimises the time necessary to complete the procedure.

To accommodate the commissioners of national pavilions, their families and staff, the hosts of the exhibition built a 1,374-apartment campus within the expo. Kazakhstan also introduced a visa-free regime for 45 countries.

According to Yessimov, the New York Times included Kazakhstan and Astana EXPO 2017 on the list of recommended places to visit in 2017.

He also drew attention to the fact that the realities of the modern world put forward the specific requirements for the security of the exhibition’s attendees and participants.

“We have carefully studied the experience of exhibitions in Milan and Shanghai, the Olympic Games in Sochi and Rio de Janeiro. Based on that study, we have developed an operational plan that covers all security issues. It will help to ensure maximum safety for all the participants of the exhibition,” Yessimov said. 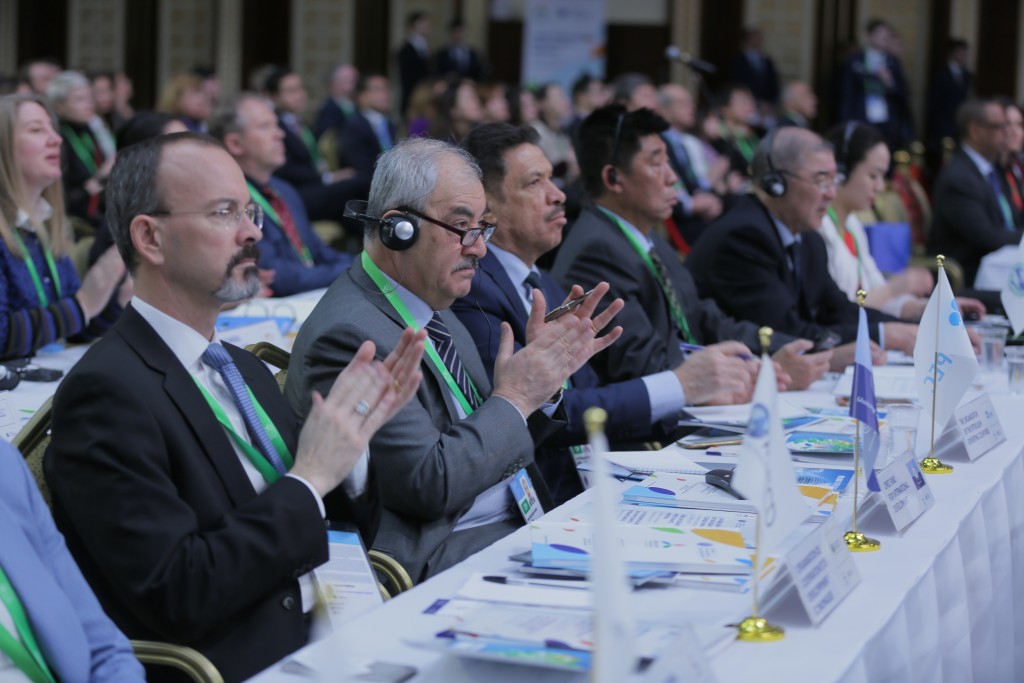 The meeting also announced the establishment of “Space” award as part of the exhibition that will grant 20,000 euros ($21,031) for the best innovative project in the field of future energy. The award was established by the BIE and Japanese EXPO’90 fund and is awarded in the form of a start-up to develop the winner project. Citizens and organisations from 160 BIE participant countries are invited to take part in the contest. The competition results will be announced closer to the end of the expo.

The international participants’ meeting is the key event in the organisation of the expo that takes place on an annual basis and provides a platform for exchanging information on the main stages of preparation for the host country, the BIE and the participants, both confirmed and potential.

To date, 115 countries and 18 international organisations have officially confirmed their participation in the exhibition. Thus, by the number of participating countries, EXPO 2017 has become one of the most successful in the history of exhibitions.

The exhibition expects around 5 million visits, with 85 percent of visitors coming from Kazakhstan, and 15 percent – from abroad. Most of the foreign guests are expected to come from the Commonwealth of Independent States countries and China. A significant number of tourists are also expected from Europe, Turkey and the United States.