By Zhanna Shayakhmetova in Sports on 9 January 2017

ASTANA – The World Universiade 2017 torch relay will begin its journey in Kazakhstan by lighting the flame Jan. 25 in Astana. The flame will then continue to Ust-Kamenogorsk, Pavlodar, Kokshetau, Petropavlovsk, Kostanai and Karaganda Jan. 26 and Aktobe, Uralsk, Atyrau and Aktau Jan. 27. The route then continues to Kyzylorda, Shymkent, Taraz and Taldykorgan Jan. 28 before the final lighting of the flame in the host city of Almaty Jan. 29. 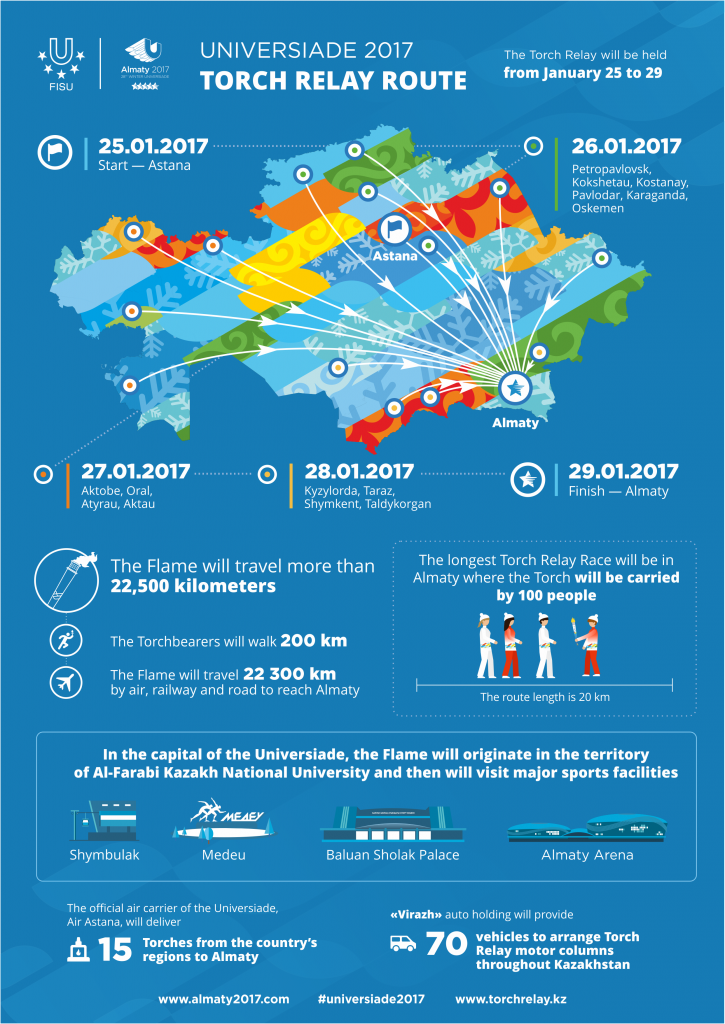 The rehearsals of the torch light procession with the participation of top sports people of Kazakhstan was held in Almaty in early January. The ceremony unites the country that conducts the games, and outstanding sportsmen will take part in the torch relay.

According to plans, all the athletes will gather in Almaty, in the heart of the Universiade and participate in the opening ceremony. As a sporting event, Universiade attracts more and more young people, said the organisers.

“It is important that young people will be able to communicate and get to know each other as part of this project. We want to show that our students are talented, creative and strong,” said Winter Universiade Organising Directorate Head Nail Nurov.

“The regional headquarters completed work on the torch relay route in regional centres Dec. 22. Now all 16 cities taking part in the relay are decided as well attractions, which will be involved at every stage,” according to the organisation’s press release.

The flame will cover a distance of more than 22,500 kilometres and 200 kilometres in the hands of torchbearers. Air Astana, official airline of the student games will transmit the flame from the regions to Almaty where on Jan. 29 the official opening of the Universiade will be held.

“The concept of Universiade 2017 is unique. The organisers divided the project into 16 separate parts and enabled each region to adapt it for themselves. We now have 16 routes which differ from each other, but they are part of a whole. The Universiade torch relay will expand the geography from one city to the whole country,” Nurov said.

The distance of the route in each regional centre varies from 10 to 12 kilometres so that each torchbearer will run about 200 metres. One hundred people will carry the torch in Almaty on a route length of 20 kilometres. The flame will begin its journey at the Al-Farabi Kazakh National University and visit major sports facilities, including Shymbulak, Medeo Ice Rink and Baluan Sholak Palace, educational centres, major attractions and finish at the Almaty Arena stadium during the opening ceremony.

Regions throughout Kazakhstan are preparing for the festive events. For example, the torch relay in the Karaganda region will be divided into two stages: the first will take place in Temirtau and the second stage will be held in Karaganda. The Temirtau city bowl will contain the fire from blast furnace of smelter and coal from the region’s mines.

Thus, the relay will demonstrate the best features of the regions. Students, athletes and young scientists will unite to carry the Universiade torch. The relay is set to draw people’s attention to the upcoming major sporting event and encourage more people to visit Almaty during the Universiade.

One-hundred-forty torches were produced for the games in a minimalist style. They were made by an Australian company that has been working with the Olympic movement since 2000.