By Kamila Zhumabayeva in Nur-Sultan on 13 January 2017

ASTANA – Residents and guests of the capital city will soon be able to enjoy a city view at a height of 65 metres from a Ferris wheel and roll down a slide at a water-park on Astana’s left bank area. 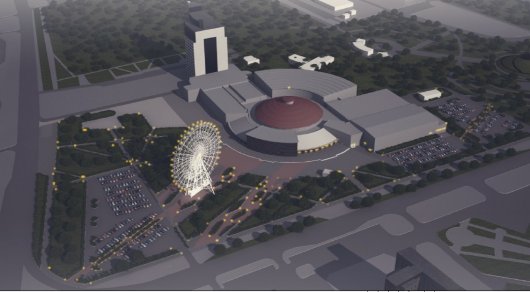 The water-park is being built in a central circle area (under a dome) of the entertainment centre. It will have two swimming areas. One will have an effect of a wave while the other one will serve as a completion point of descent from five different slides.

“All slides and swimming areas will be geared towards different age categories. A lazy river will be built all the way around the park. It will have a weak but constant flow that will enable visitors to move around the park territory easily on special inflatables and choose a suitable attraction,” as noted by the administration of Duman entertainment centre.

“Guests will additionally have four different kinds of baths and hamams (Turkish baths) available at their service,” the message continued.

About 240,000 to 250,000 people can visit the water-park per year. The entertainment complex will also include dressing rooms and a food court.

The capital’s Ferris wheel is fitted with 36 cabins with a carrying capacity of six persons per cabin. The cabins will be equipped with panoramic illumination, air conditioners, and the heating system allowing people to have comfortable rides any time of the year.

On top of that, it will have four cabins with enhanced comfort installed during construction. Visitors can enjoy the attraction at any time, as it will be open round the clock.

Opened to the public in 2014, the 167.6-metre-tall High Roller in Las Vegas is the tallest Ferris wheel in the world. Dubai Eye Ferris Wheel (currently under construction) will be the world’s highest at 210 metres upon completion.