ASTANA – Three guarantor states of the recent efforts to end the six-year conflict in Syria, Russia, Turkey and Iran, completed the two days of peace talks in Astana Jan. 24 by agreeing to create a mechanism to ensure compliance with the existing ceasefire and to continue talks towards a more permanent solution Feb. 8. in Geneva.

The Astana talks, which were the first ever to include both the Syrian government and the Syrian armed opposition, were attended by delegations from Russia, Iran and Turkey and UN Secretary-General’s Special Envoy for Syria Staffan de Mistura. U.S. Ambassador to Kazakhstan George Krol attended the talks as an observer. 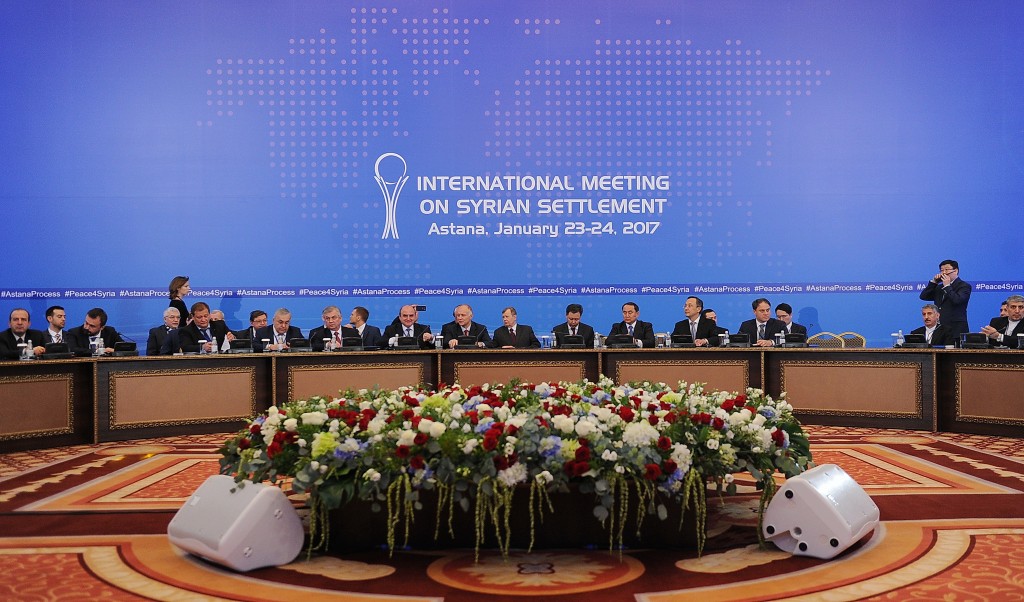 According to a joint statement from the three states following the talks, the countries decided to establish “a trilateral mechanism to observe and ensure full compliance with the ceasefire, prevent any provocations and determine all modalities of the ceasefire” and “reiterate their determination to fight jointly against ISIL/Daesh and Al-Nusra and to separate them from armed opposition groups.”

The statement also agreed to “support the willingness of the armed opposition groups to participate in the next round of negotiations to be held between the government and the opposition under the UN auspices in Geneva as of Feb. 8.”

Permanent Representative of Syria to the United Nations Bashar al-Jaafari, who represented the Syrian government in the talks, noted that the mechanism on monitoring the ceasefire will be implemented step by step but the truce does not apply to the territory of Wadi Barada, since terrorists (Al-Nusra group) are attacking that territory

Opposite al-Jaafari, the opposition was led by Mohammad Alloush, leader of Jaish al-Islam. Representatives of 15 rebel groups also took part in the talks, according to the Kazakh Ministry of Foreign Affairs. 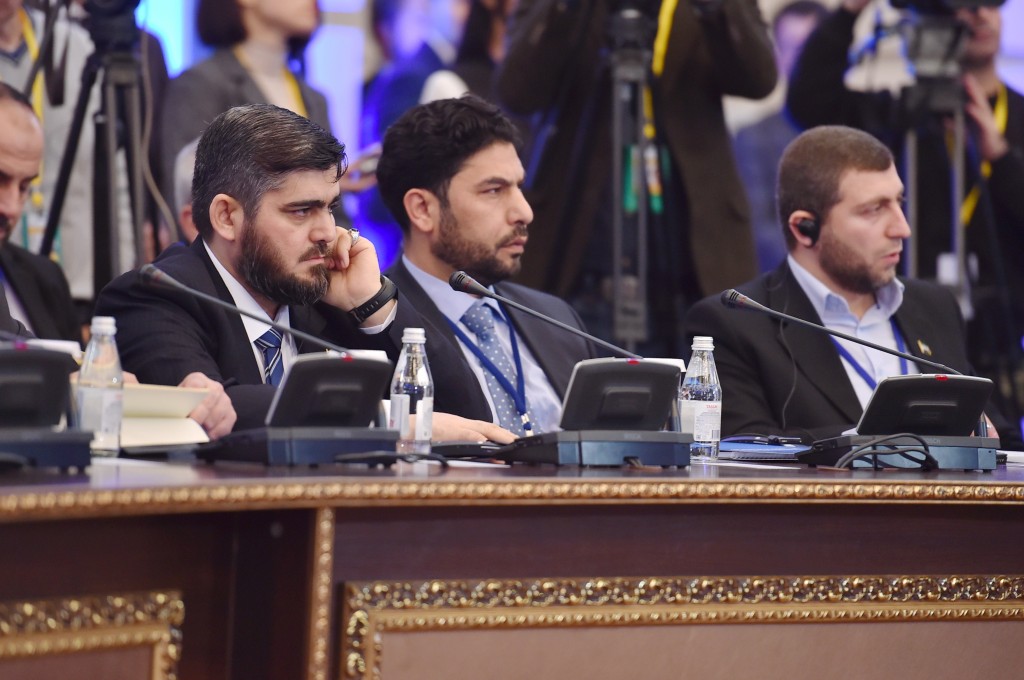 According to the final joint statement from Russia, Turkey and Iran, the three “countries  reaffirm their commitment to the sovereignty, independence, unity and territorial integrity of Syria as a multi-ethnic, multi-religious, non-sectarian and democratic state, as confirmed by the UN Security Council.”

They also expressed their conviction that “there is no military solution to the Syrian conflict and that it can be only solved through a political process based on the implementation of the UN Security Council resolution 2254 in its entirety,” according to Kazakh Foreign Minister Kairat Abdrakhmanov who read out the tri-country statement after the talks.

“I want to acknowledge with great appreciation the delegations of the Syrian government and opposition. It takes political courage for them to sit in the same room after a long time and listen to their demands and complaints. But that was a unique opportunity,” said de Mistura at a press conference after the talks, adding he will present the results at the UN in New York next week. 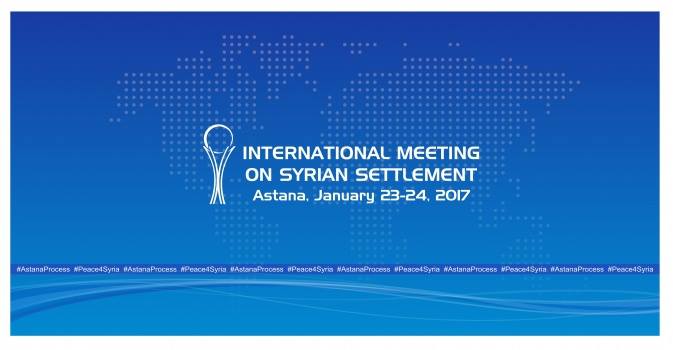 Syrian government representative al-Jaafari said it was extremely painful to sit in the same room with Syrian rebels, who are “working for foreign powers, some of them even committed terrorist acts.” But he noted that the government will do “whatever it takes to stop bloodshed and terror.”

It was important for Russia, Turkey and Iran during the course of negotiations to stress the dominant role of the UN and the importance of UN Security Council resolutions, including the work of the Special Representative of the UN Secretary General on Syria.

Equally significant was the three countries’ stressing the importance of finding solutions involving all stakeholders and that the Feb. 8 talks in Geneva should focus on political solutions.

The Astana Process, as the talks have been dubbed, was preceded by an initiative jointly expressed by the presidents of the Russian Federation and the Republic of Turkey to make Astana the venue of the Syrian settlement talks, said Kazakh Foreign Minister Kairat Abdrakhmanov, who said Jan. 23 at the opening of the talks that it is a time to “make the real breakthrough that the Syrian people rightfully deserve.”

Opening the talks, Abdrakhmanov expressed Kazakhstan’s willingness to assist all parties to the talks and by reading a greeting from Kazakh President Nursultan Nazarbayev.

“The complex situation in Syria is drawing global attention. We must admit that the bloodshed that continues to persist in Syria for approximately six years has brought nothing but misery and hardship to the holy region regarded as an intersection of different civilisations and cultures,” Nazarbayev said in his statement.

“Kazakhstan, as a peace-loving state and a non-permanent member of the UN Security Council, is interested in strengthening and promoting security and stability in the Middle East. Today’s meeting is a clear manifestation of the international community’s efforts directed to a peaceful settlement of the situation in Syria. Kazakhstan believes that the only way to find a solution to the Syrian crisis is through negotiations based on mutual trust and understanding,” the Kazakh President continued.

“It is not a coincidence that our country was selected as the host for today’s negotiations. As you know, two rounds of talks between several opposition groups were held in Astana in 2015. In order to alleviate the suffering of the Syrian refugees, we have allocated over $700,000 and have recently provided 500 tonnes of food as humanitarian assistance. I am confident that the Astana meeting will create the necessary conditions for all concerned parties to find a suitable solution to the Syrian crisis within the framework of the Geneva process under the UN auspices and will make a worthy contribution to promoting peace and stability in Syria,” Abdrakhmanov quoted the President’s greeting.

In his own remarks, broadcast to the press centre where approximately 300 foreign and 100 Kazakh reporters gathered, Abdrakhmanov also pointed out Kazakhstan’s experience in easing international tensions elsewhere.

“The Syrian people are desperately in need of ending this violence, and they are looking forward to relief from their own suffering and a path out of this conflict and to a real future for all of them, men, women and children in dignity. I know how proud Syrians are and how proud they are to be Syrian and of their beautiful country, a country that has made historically so many important contributions to human civilisation,” he said.

Six years of war in Syria has turned the country into ruins, killing half a million people and driving the population to seek sanctuary in neighbouring countries. From the beginning of the Syrian crisis, Kazakhstan has been urging the international community to seek a diplomatic solution, believing that military methods only exacerbate the situation.

Kazakhstan has always been ready to act as a neutral intermediary for all forces involved in the conflict. In May 2015, it hosted the first round of talks with representatives of the Syrian opposition committed to finding a political solution to the crisis. Later in October, the parties agreed to establish corridors for safe passage of refugees during the second round of the negotiations.

It was notable that both during the opening of the talks and at their conclusion all sides were grateful to Kazakhstan for hosting the negotiations, and that the three guarantor states expressed gratitude to Kazakhstan and President Nursultan Nazarbayev for hospitality and creation of the most comfortable conditions for work.

Several Kazakh experts, commenting on the results of the international meeting on Syria in the media immediately after the results were announced, including Chair of Mazhilis Foreign Affairs, Security and Defence Committee Chair Maulen Ashimbayev, noted that the results represent a practical step forward in strengthening the cessation of hostilities in the country agreed to in December 2016 and a potential turning point in international efforts to end the war in Syria.