Kazakhstan, Uzbekistan to Reopen Section of M-39 Highway in February

By Aigerim Seisembayeva in International on 10 January 2017

ASTANA – Kazakhstan and Uzbekistan have reached an agreement to reopen Highway M-39 in February. The highway has been closed for 10 years. 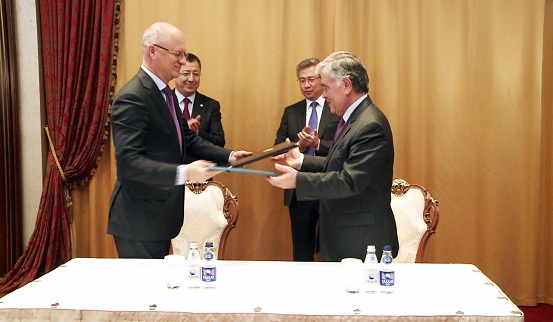 “After commissioning, the new road will reduce the distance [needed to be travelled from Tashkent to Samarkand] by 65 kilometres. This will contribute to further strengthening of relations between the two countries and the development of trade and tourism. I also hope it will strengthen ties between the Uzbek capital of Tashkent and the South Kazakhstan region,” said Ambassador of Kazakhstan to the Republic of Uzbekistan Erik Utembayev following a Jan. 6 meeting with Ambassador at Large of the Ministry of Foreign Affairs of the Republic of Uzbekistan Ilhom Nematov in southern Kazakhstan.

The meeting was also attended by Kazakhstan’s Vice Minister for Investment and Development Roman Sklyar and Akim (Governor) of the South Kazakhstan region Zhanseit Tuymebayev.

They agreed to rebuild a 65-kilometre section of Highway M-39 (from the 887.8 km to the 911.9 km), which passes through the territory of the Maktaaral area and build a checkpoint along the highway. The highway’s border area will also have a facility to manage duty-free goods turnover.

After the completion of the reconstruction, residents of Tashkent will be able to get to Samarkand while avoiding a bypass road through Jizzakh, reducing the distance needed to be travelled from 89 km to 24.5 km.

At the end of the meeting, Nematov thanked the Kazakh side for supporting the issue and noted the meeting was an example of developing bilateral cooperation.

“We came here with a noble mission of discussing the possible renewal of motor traffic on the M-39 highway. Back in 1998, we signed a bilateral agreement on the use of M-39 24.3 km. In the near future, we will open the road, and I hope traffic will be resumed,” Nematov said.