By Anuar Abdrakhmanov in Sports on 10 January 2017 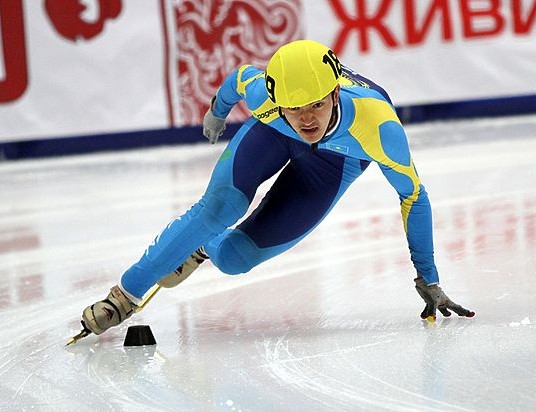 Team Kazakhstan became one of the few rivalling the sport’s trendsetters, including South Korea, the U.S., Canada, the Netherlands and Russia.

At one of the recent International Speed Skating Union (ISU) World Cup stages, which took place in Salt Lake City Nov. 11-13, the Kazakh skaters won two places on the podium: gold for Abzal Azhgaliyev in the 500 metres and bronze for the national team in 5,000-metre relay.

A month later at another World Cup stage, Dec. 9-11 in Shanghai, Azhgaliyev was fifth in the 500-metre heat, Aidar Bekzhanov’s was sixth, and Nurbergen Zhumagaziyev also finished sixth in 1000 metres.

In Gangheung, South Korea, on Dec. 16-18, Team Kazakhstan again updated its medal tally. Denish Nikisha won silver in 500 metre while 26-year-old Zhumagaziyev, who has behind him more than a decade of participating in World Cup stages with finishes mainly beyond the top 30, finally won his first gold, which came in the 1,000 metres.

In the World Cup classification, with four stages out of six completed, Abzaliyev ranks second and Nikisha seventh in the 500 metres, Zhumagaziyev fifth in 1,000 metres and the national team sixth in the 5,000-metre relay.

“Kazakh short track speed skating’s history spans more than three decades. As for me, in 2002, I went to Oral [a regional centre in north-western Kazakhstan] where there was a new speed skating arena. Daulet Turlykhanov, who then headed the governmental agency on sports and tourism, backed my plans and connected me to the region’s governor Krymbek Kusherbayev. Good conditions were created for us and I started developing short track in the city. In three years, I tested more than 5,000 children and selected among them less than one percent of the most promising ones. Years later, there remains four or five boys from them who have developed into world-class athletes,” Karsybekov recalls.

A strong impetus to the sport’s increasing popularity in Kazakhstan was given by Kazakh skaters’ surprising performance at the Winter Olympics 2014 in Sochi where the national team made it into the final of the 5,000-metre relay and ranked fifth there, an unprecedented success.

“Following Sochi, across the nation, interest in our sport increased greatly. Now it is developing in ten regions. If one recalls its history, short track speed skating in Kazakhstan in Soviet times was first cultivated in the western city of Aktobe and then in other regions. Following the USSR collapse, development of short track practically stopped. It only survived in the Kostanai region. Since 2002, a new stage for short track in Kazakhstan began. Although now it is practiced in many parts of the country, the leaders are West Kazakhstan and Atyrau regions, as well as Astana. Gradually, other regions close in. Admittedly, domestic competition is growing every year,” Karsybekov says.

Now the national team readies for new international starts, with Winter Universiade 2017 in Almaty among them.

“We aim to win there at least gold, silver, and bronze medals. Naturally, most of our hopes are on our men’s team who are already in leading positions internationally,” the coach concluded.