By Kamila Zhumabayeva in Culture on 10 January 2017 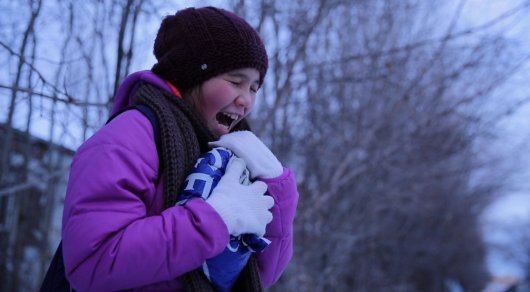 A shot from the film. Photo credit: tengrinews.kz

ASTANA – Kazakh director Sharipa Urazbayeva has made a short film about abandoned children that will premier in May, Tengrinews.kz reported.

“A problem with abandoned children is pressing nowadays. We decided to make a film on this topic. We need to show people that this is a tragedy. This film is actable and social. We decided to shock the sensibilities of our audience, show a life story,” Urazbayeva shared with the news agency.

According to the plot of the film, a female teenager has to face the death of her child and grow up morally.

The director mentioned the film was shot in Astana with the help of friends and acquaintances. However, due to a lack of funding, the team decided to make a short feature.

The film is currently in a post-production and will be screened in May. Maira Zhumabekova and Urazbayeva are scriptwriters.

Urazbayeva is a Kazakh director known for her social film work. She is a 2010 graduate of the Zhurgenov Kazakh National Academy of Arts.

Her short film “Bastau” (“Source” or “Beginning”) was screened at the Cannes Film Festival in 2013. The main hero in this film covers a huge distance by bicycle to water a lifeless field in a desert.

Yerbolat Toguzakov who was an actor in film “Shal” by Kazakh director Yermek Tursunov played the main role in “Bastau” for free. The film also received a prize in “Best Experimental Film” nomination at the Varesh Int’l Filmfestival in Iran, according to an earlier report.