The World Exhibition EXPO 2020 will be held in Dubai under the theme “Connecting Minds, Creating the Future.” Kazakh Ambassador to the United Arab Emirates (UAE) Kairat Lama Sharif shared his opinion on creating the future of Kazakh-Emirati cooperation.

How do you assess the current state of bilateral relations between Kazakhstan and the Emirates?

This year, we are celebrating the 25th anniversary of the establishment of diplomatic relations between Kazakhstan and the UAE. Over the years, the Emirates has become a reliable and effective partner for Kazakhstan in the Arab and Muslim world.

Currently, the two countries maintain a quite active and productive political dialogue; they have developed similar approaches to the resolution of global problems and successfully implement big investment economic projects.

The jubilee year begins with the official visit of President of Kazakhstan Nursultan Nazarbayev to the UAE. At the invitation of the Emirates government, Nazarbayev will take part in the 10th World Future Energy Summit on Jan. 16 in Abu Dhabi.

These concrete steps will give powerful impetus to further fruitful cooperation between Kazakhstan and the UAE.

Among the Middle East countries, the UAE continues to be a major investor in Kazakhstan. According to the National Bank of Kazakhstan, in the period from 2005-2016 the gross inflow of direct investments from the UAE to Kazakhstan’s economy amounted to nearly $2 billion.

In addition, the UAE allocated more than $100 million on a pro bono basis to Kazakhstan for the construction of social facilities. A clear example of friendly relations is the Kazakh-Emirati Secondary School, built in Astana this year with the grant from the Charitable Foundation of the UAE President.

Thus, today we can confidently say that relations between the two countries have successfully passed the stage of formation and now have reached a completely new, effective level of development in many spheres of their multi-faceted cooperation. 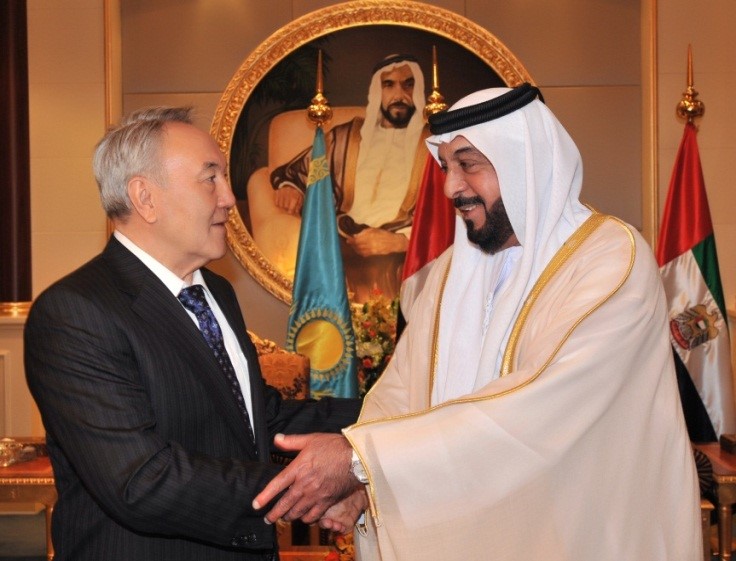 What specific steps are being taken for the development of a strategic partnership between Astana and Abu Dhabi?

It is worth noting that the “strategic partnership,” as the term of interstate relations, suggests the presence of a number of conditions. First of all, partner countries should have fundamentally important strategic objectives, the achievement of which is impossible in the ordinary type of cooperation and can be achieved only by moving their bilateral relations to a higher quality level of partnership. Here, it concerns very important indicators in the priority areas such as trade and economy, investments, science and technology, as well as the cultural and humanitarian field.

If we talk about specific promising areas of trade and economic cooperation, it, first of all, comes to Kazakhstan’s export of agricultural products to the UAE. Emirati investors and partners have been paying special attention lately to the agricultural industry of Kazakhstan, which, in their opinion, could be the anchor for other areas of bilateral, mutually-beneficial cooperation.

The Emirates strongly supported the initiative of President Nazarbayev to establish the Islamic Organisation for Food Security (IOFS) with headquarters in Astana.

In April 2016, a delegation of the UAE Ministry of Climate Change and Environment participated in the inaugural session of the IOFS General Assembly.

The new agency of the Organisation of Islamic Cooperation (OIC) will coordinate the efforts of the member states of the organisation in the field of agriculture and food security, develop strategies and programmes on agriculture development and provide technical assistance to the states in need, as well as take practical measures to combat hunger.

Establishment of the IOFS is a qualitatively new step in the economic cooperation between the OIC member states. Previously, they interacted in this area without a single coordinating body and development strategy and with low efficiency and fragmentation of joint actions.

In general, I want to emphasise that the activities of the IOFS in Astana will support Kazakhstan’s standing in the Muslim world, as well as strengthen the position of the Republic of Kazakhstan as a leading exporter of food to the OIC markets.

In this regard, it should be noted that the rapid economic development of the UAE over the past 20 years has led to a sharp increase of its population: from 2.3 million people in 1995 to 8.6 million in 2015.

The Emirates imports about 85 percent of the food present in the local market. In general, in the region this figure reaches 90 percent.

According to the Customs Services of the United Arab Emirates, last year the country imported food products worth more than $11.7 billion. However, foreign companies producing or selling food frequently choose the Emirates as the starting point, where their cargoes are distributed to other regions of the world.

Currently, with the assistance of the Embassy of Kazakhstan in Abu Dhabi, Kazakh agro-industrial companies are considering supplying different types of food to the UAE, establishing direct contacts with potential buyers from the Emirates, exchanging information on quality and prices of products and discussing details of export contracts.

Furthermore, against the background of the active development of space activities in the Emirates in recent years, there are good prospects for expanding mutually beneficial cooperation in peaceful outer space exploration.

The UAE has adopted a programme for the development of its space industry and created the Federal Space Agency and the Mohammed bin Rashid Al Maktoum Dubai Space Centre. In celebration of the 50th anniversary of the foundation of the UAE, the Emirates plans to launch an artificial satellite to Mars in 2021.

Taking into account that Kazakhstan is among the 30 countries possessing space technology and in the top 10 in terms of high definition technology, we could jointly and successfully implement the ambitious plans of the Emirates.

To assess the state and prospects of further bilateral cooperation, in May 2016 a delegation of the UAE Federal Space Agency headed by Chairman Khalifa Al Rumaithi visited Kazakhstan. They discussed cooperation between the space agencies of the two countries in such areas as space research, remote sensing of the Earth, global satellite navigation, the use of space infrastructure, the creation of space vehicles and their parts and the provision and use of launch services.

During the visit, the Aerospace Committee of the Ministry for Investment and Development of Kazakhstan and the UAE Space Agency signed a memorandum of understanding in the field of exploration and use of outer space for peaceful purposes. Thus, they established a legal framework for expanding bilateral cooperation in astronautics.

The next important step in the Kazakh-Emirati partnership could be the establishment of cooperation in nuclear energy. In recent years, the UAE has paid special attention to the development of green energy, or alternative and renewable energy sources, including nuclear.

Given the high rate of socio-economic development of the Emirates, every year electricity consumption in the country grows. Since 2008, the UAE government has conducted a number of studies on energy demand and electricity generation. The results show that by 2020 the demand for electricity will amount to almost 40,000 MW (40 GW); i.e. demand will increase annually by an average of 9 percent.

In this regard, the Emirates Nuclear Energy Corporation (ENEC) was created in 2009 with initial charter capital of $100 million.

In accordance with the construction plan, the first unit of the nuclear power plant is to be commissioned this year, and it is planned to put into operation one reactor annually; thus by 2020, the project will be completed. After the launch of the four reactors of the Barakah nuclear power plant, its energy generation will amount to 5,600 MW, which will cover 25 percent of the electricity needs in the country and will help to prevent the emission of harmful gases in amount of about 12 million tonnes per year.

The fact that Kazakhstan ranks first in the world in uranium production provides the Kazatomprom national company competitive opportunities to conclude a long-term contract to supply uranium to the Barakah nuclear power plant.

Given that Astana and Dubai have been elected as venues for EXPO 2017 and EXPO 2020, it appears there is a new field for fruitful cooperation. How is the UAE preparing to participate in EXPO 2017 in Astana?

It should be noted that the UAE was the first Arab country in the Middle East to officially confirm its participation in EXPO 2017 in Astana, appoint a commissioner for its national pavilion and sign a participation agreement.

The UAE will be provided with one of the largest pavilions, more than 1,000 square metres. This decision on the Kazakh side is recognition of the significant and substantial contribution of the Emirates to the global development of renewable and alternative energy sources.

Everyone knows that now Abu Dhabi is an international centre for renewable energy and green technology. The UAE leadership recognises the instability of an economy based on natural resources and intends to continue active steps to diversify its economy and, ultimately, its energy mix.

In this regard, the UAE’s Masdar Company plays a key role in achieving these objectives by enhancing the economic sectors not related to oil and thereby reducing economic dependence on the oil market. Today, Masdar City, existing since 2008 near the capital of the UAE, is the first eco-city in the world. It is fully supplied by renewable solar and wind energy, has no cars, completely recycles and uses its waste. The energy accumulated during the day is used to produce electricity at night, allowing the eco-city to operate around the clock.

In 2013, Masdar launched a major solar power plant, Shams 1 in Madinat Zayed, 120 km from Abu Dhabi. It covers an area of over 250 hectares, which is comparable to 285 football fields.

With the introduction of the Shams 1 power plant with the capacity of 100 MW, the amount of carbon dioxide emissions has been reduced by 175,000 tonnes, the equivalent of planting 1.5 million trees or decreasing the number of vehicles in Abu Dhabi by 15,000. That is why I suppose that quite a lot of people will want to visit the interactive Emirati pavilion dedicated to the theme of Future Energy.

In general, I would like also to note that it is planned to celebrate the National Day of the Emirates in Kazakhstan on Sept. 6, 2017, as part of EXPO 2017.

In this regard, we hope that the ceremony of handing over the flag of EXPO 2017 in Astana to the UAE side, the successor and future organiser of Dubai EXPO 2020, will be a historic act of exchange of constructive experience and a symbol of the aspirations of our countries to continue successful interaction in the future. It is in our common interest.