By Anuar Abdrakhmanov in Sports on 4 January 2017 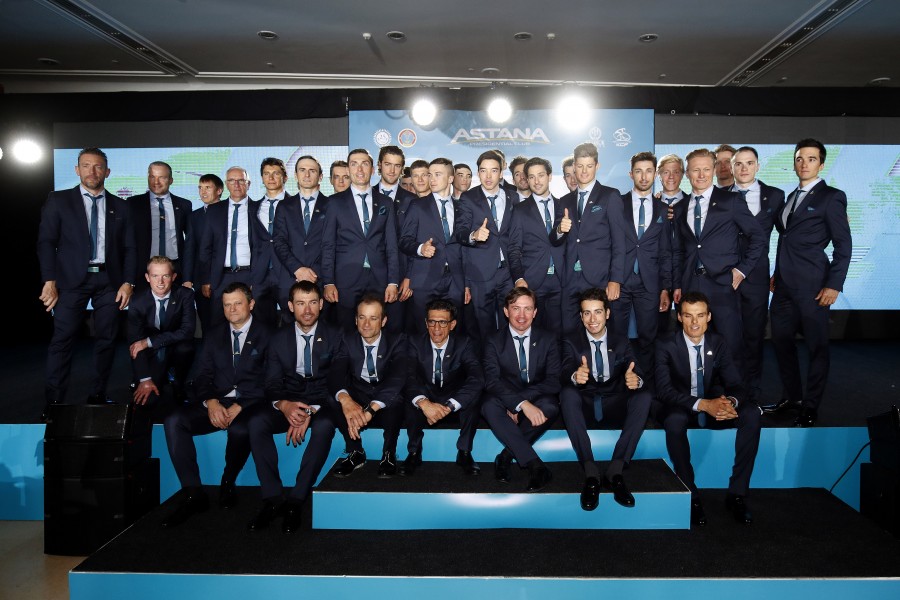 This time, the format changed slightly and along with a traditional press conference and presentation ceremony featured the riders’ visit to an orphanage and a meeting with cadets at a specialised sports school.

“Astana has earned victories in big races. Nibali’s departure will not change our strategy. We have young talented riders, such as Fabio Aru, Alexey Lutsenko and others. Our main task is to succeed at Giro d’Italia. The lineup heading there will fight for the overall victory at the race. As for Tour de France, [we count on] Jacob Fuglsang, who has progressed immensely in recent years, and following his success at the [Rio 2016] Olympics is mentally prepared to fight the favourites. An overall win will be [hard to claim], but making it into the top five is realistic. At the same time, I want to see how our Kazakh riders will perform. They already know that we will test them at Tour de France. This is a race in which for every professional cyclist it is important to try oneself at least once and not every rider has such a chance. As for Vuelta, it will be clearer [who will lead the team at the race] after the first two Grand Tours,” he said.

The team’s budget in 2017 will remain at last year’s level, according to Amanbek Kulchikov, Executive Director of the Astana Presidential Professional Sports Club, which brings together a number of major sporting projects supported by the Samruk Kazyna National Welfare Fund.

“We have a decade of work behind us and now can openly say that we will put an emphasis on [helping the development of] our own Kazakh riders. Next year, Astana’s Tour de France lineup will be half-Kazakh. Sponsors come to us because of our team’s name – not because of the stars, but because Astana has created its own brand and working with the Kazakh team became prestigious,” he said.

The riders will use new bikes this year from Argo 18, a Canadian manufacturer, as well as new uniforms and equipment from Italian manufacturer Giordana. The items were also presented at the ceremony.

In addition to Lutsenko, the winner of last year’s Tour of Hainan, Kazakhstan will be represented by Zhandos Bizhigitov, Dmitriy Gruzdev, Artyom Zakharov, Andrey Zeits, Arman Kamyshev, Bakhtiyar Kozhatayev, Ruslan Tleubayev, Daniil Fominykh, and Nikita Stalnov. Among the 10 newcomers are two interesting riders, Moreno Moser and Michael Valgren, from whom the team’s managers anticipate serious help for the leaders.

Astana Pro Team is a top-level team in the world of professional cycling, representing Kazakhstan and regularly winning races and stages across the world, including in Europe, Asia, North America and Australia for more than a decade. The team’s trophies include prizes from victories in some of the world’s most prestigious cycling races, including the three grand tours, Giro d’Italia, Tour de France and Vuelta a España.