By Anuar Abdrakhmanov in Sports on 12 January 2017 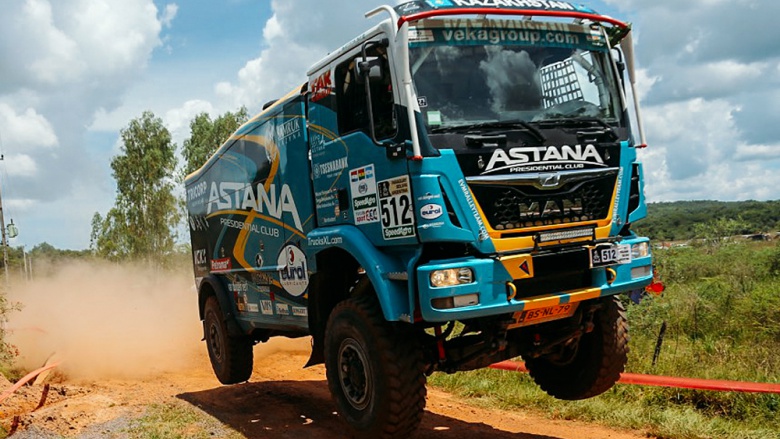 Two crews led by Arthur Ardavichus and Denis Berezovskiy are representing the Kazakh club at the world’s arguably most prestigious and dangerous off-road race. The race’s latest edition crosses the territories of Paraguay, Bolivia and Argentina.

As part of the trucks competition (T4), a crew led by third place winner of Dakar 2012, driver Ardavichus of Kazakhstan and including co-driver Serge Bruynkens of Belgium and mechanic Michel Huisman of the Netherlands, is racing a TGA MAN truck with registration number 512.

In the class of Cross-Country Series Production Vehicles (T2), a crew including winner of the 2015 FIA World Cup for Cross-Country Rallies, driver Berezovskiy and co-driver Alexey Nikizhev, is racing a Toyota Land Cruiser 200 with registration number 333.

“During the off-season, a lot of preparatory work was done, the team has moved to a higher level of technical equipment and, of course, the pilots themselves went through numerous training sessions. If we remember our athletes’ great experience of participating in high-level competitions, then we can believe that with this readiness they would achieve the highest results and implement all the goals set up. I wish Team Astana makes full use of its big potential,” Astana Presidential Professional Sports Club’s President Amanbek Kulchikov commented.

A celebratory start to the two-week race was given in the capital of Paraguay, Asuncion. It was from here that the riders started their long road to the final in Buenos Aires. The route includes 12 stages covering 9,000 kilometres. This year’s line-up at the start saw 491 participants from 59 nations.

Astana Motorsports is competing at Dakar 2017 with new cars. The team’s captain Ardavichus, following completion of a three-year contract with Bonver Dakar Project, switched his Tatra truck for a more powerful TGA MAN 4×4.

“For a whole year, we have been preparing for this long-awaited event. This year, thanks to the Astana Presidential Sports Club, we ride more powerful vehicles. Everyone understands that Dakar is a tough test for any driver but we believe we can meet all the challenges and will fight to secure good results. We must perform decently because our fans are pinning hopes on us,” Ardavichus said.

Following five stages of Dakar 2017, Astana Motorsports was in a good position to earn a podium spot. By Jan. 9, Berezovskiy’s crew kept third place in its T2 class, and Ardavichus and his crew returned to the Top 10 in T4.