ASTANA – Kazakh Foreign Minister Kairat Abdrakhmanov paid his first visit to Moscow Jan. 20 at the invitation of Russian Foreign Minister Sergey Lavrov. It was also the newly-appointed foreign minister’s initial foreign trip on a bilateral basis. Following the talks, Abdrakhmanov and Lavrov gave a joint press conference where they commented on the outcome of the negotiations, as well as on the upcoming Astana talks on Syria. 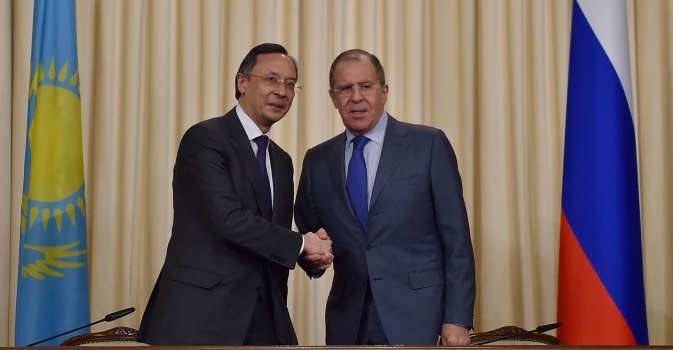 Abdrakhmanov opened his speech by thanking his counterpart for the invitation and the warm and friendly welcome Russia extended to the Kazakh delegation.

“I’m especially glad that my visit to Russia is held in the year of the 25th anniversary of the establishment of diplomatic relations between the Republic of Kazakhstan and the Russian Federation,” he said.

The sides discussed a wide range of issues of bilateral and multilateral cooperation and exchanged views on topical issues of the regional and international agenda.

Lavrov noted Kazakhstan is Russia’s ally, good neighbour and strategic partner. The interaction between the countries, in his words, is an important factor in ensuring the progressive socio-economic development of Kazakhstan and Russia and sustaining stability in the Central Asian region.

“In the field of bilateral relations, we praised the legal framework which consists of more than 300 contracts and agreements. Most of them work efficiently,” he said.

Abdrakhmanov noted that during the years of independence Kazakhstan and Russia not only preserved their ties, but also learned a new way to build their relations based on the principles of equality and mutually-beneficial partnership. 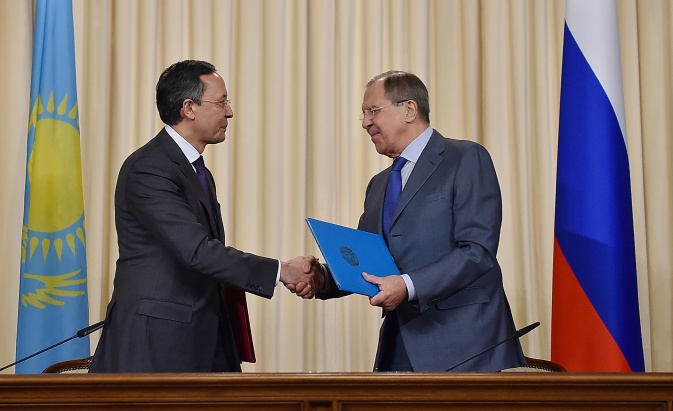 “The leading role in strengthening the strategic partnership between Kazakhstan and Russia is attached to the regular meetings and talks between the heads of our states. Only last year, the presidents of Kazakhstan and Russia held eleven meetings, both bilaterally and on various international and regional platforms,” he added.

He also highlighted that Russia and Kazakhstan have long-term strategic projects in all sectors of the economy. For instance, a large-scale Kazakh-Russian business forum was conducted within the 13th forum on interregional cooperation held Oct. 4 in Astana with the participation of the heads of the two states. Forty-seven bilateral documents worth more than $3 billion were signed during the event.

“Our two countries have established an intense political dialogue and built deep economic relations. All spheres of cooperation are effectively developing,” said Abdrakhmanov.

In the context of Kazakhstan beginning its tenure Jan. 1 as a non-permanent member of the United Nations Security Council (UNSC), the two sides discussed cooperation within the UN’s main political body, as well as within regional organisations such as the Commonwealth of Independent States (CIS), Eurasian Economic Union (EAEU), Collective Security Treaty Organisation (CSTO), Shanghai Cooperation Organisation (SCO) and Conference on Interaction and Confidence-Building Measures in Asia (CICA).

“I would like to note that the election of our country [as UNSC non-permanent member] is evidence of a broad international recognition of the active role Kazakhstan and President Nazarbayev play in resolving the important global issues of peace and security,” Abdrakhamanov added.

Other key topics included ensuring global and regional security, the talks on Syria, the situation in Afghanistan and other pressing issues on the international agenda.

Speaking at the press conference, Abdrakhmanov emphasised that hosting the talks aimed at bringing peace to Syria is a great honour for Kazakhstan.

“We consider the meeting in Astana as another contribution of Kazakhstan to the Syrian settlement process, which is taking place in Geneva under the auspices of the UN,” he said.

He added intensive preparations are being held in the Kazakh capital. Complex measures are being taken, including organisational and protocol issues, logistics, accommodation and security.

Lavrov noted Kazakhstan has sought from the beginning to contribute to the efforts to resolve the Syrian crisis. The main purpose has been to bring representatives of the Syrian Arab Republic (SAR) and the fragmented opposition to the negotiating table, he said, adding the armed opposition has not been represented in the process until now.

“From the very beginning of these efforts, when it came to deciding on where to continue the process of establishing relations between the government and the armed opposition, all the participants mentioned the capital of Kazakhstan, Astana, as one of the most suitable places. The government and all opposition groups considered this place as the best possible,” said Lavrov.

Kazakhstan has previously served as a mediator in resolving regional and global conflicts, noted Abdrakhmanov, evoking the country’s crucial role in mending relations between Russia and Turkey last year.

“You have witnessed the role that Kazakh President Nazarbayev has played in the rapprochement of our two partners,” he added.

The meeting on Syria is scheduled for Jan. 23. Representatives of the SAR and opposition groups, as well as Iran, Russia, Turkey and the UN, are expected to attend, while the United States is also invited. Kazakhstan is offering a platform for the talks and will not be participating in the negotiations.