ASTANA – The Kazakh Ministry of Defence recently reported on the results of the Autumn 2016 Recruiting Campaign, which was distinguished by a qualitative growth in conscripts. 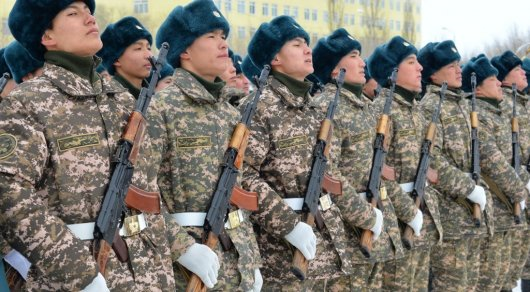 The young recruits underwent examinations in several areas. In particular, attention was focused on the health, mental and emotional readiness of young soldiers and level of their education.

“Individual interviews, psychological trainings and lessons served as a good basis to further service for soldiers. Last year, conscription of Kazakhstan citizens for military service was carried out in compliance with the presidential decree ‘On Army Discharge and Military Draft of Kazakh Citizens in April-June and October-December 2016.’ Distribution to military units, as before, was carried out according to the exterritorial recruiting concept,” noted the report.

According to the ministry, newly recruited soldiers have adapted to new conditions in military units.

“Compared to the Spring 2016 Recruiting Campaign, the number of conscripts has increased significantly. Seventy-six percent of young men have higher or vocational education. About 93 percent of them follow a healthy lifestyle and practice sport. Readiness of young men to military service was accessed good enough. In autumn last year, nearly 15,000 men were conscripted throughout Kazakhstan. Approximately 5,000 young soldiers pledged to serve the country in the military units of the Land Forces, Air Defence Forces, Naval Forces, Military Police and the Central Army Sports Club,” press service of the defence ministry reports.

Nine athletes from the Central Army Sports Club have been included in the national team of Kazakhstan to perform at the Winter Universiade in Almaty. Soldiers are expected to compete in the biathlon, cross-country skiing and ice hockey. Army athletes are very excited to face competitors at the upcoming Universiade that kicks off Jan. 29.

In October last year, Kazakhstan launched the Autumn 2016 Recruiting Campaign. Citizens of 1989-1998 year of birth were conscripted to the Armed Forces and other troops and military units of Kazakhstan. The education of young men was also taken into account while recruiting to the military units.