ASTANA – Citizens of Kazakhstan chose not one, but two of their countrymen to win the “Worthy Citizen of Kazakhstan” award in transparent online voting held from Nov. 15 to Dec. 25.

Two candidates, Murat Kabylbayev and Marina Cheishvili, received the most votes in the project organised by BI Group, the largest investment and construction holding of Kazakhstan. BI Group’s management decided that both candidates deserved the main prize of the competition, so each was given a one-bedroom apartment in a popular residential area of Astana. 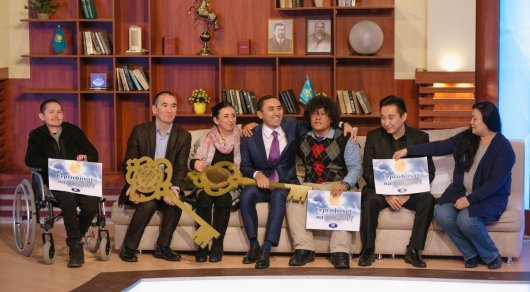 “The hearts of our citizens were touched by the story of incredible dedication and fortitude of Marina Cheishvili. She recently experienced a personal loss and today helps people struggling with cancer. Marina Cheishvili and Murat Kabylbayev are engaged in solving problems of our society: adopting children from orphanages and dealing with saddening diagnoses,” said the project’s organisers.

Cheishvili became a social worker in a cancer ward after the loss of her son, Amiram, to cancer. She decided to remain in Astana to help people facing this terrible diagnosis.

“By helping these people, we become better, kinder and more compassionate. Many people wrote me and I heard words of love. In this routine work, you do not expect people to thank you. Those letters full of kind words were a great support for me. When my son was sick, I spent a year asking for a help. I received such strong support from the people. I flew on this energy. Then, after a time, remembering those feelings and emotions, I thought I would not be able to experience such feelings again, feelings of boundless gratitude for the powerful stream of love that was poured out on me. I was again plunged into this love thanks to this competition,” Cheishvili said.

“When my children found out about this competition, of course, they wanted to vote for me, but I asked them to read the story of each candidate. Thus, my daughter was delighted with Azamat [a musician with limited sight]. My daughter plays the piano and he was a great motivation for her. These stories are worth talking about,” she added. 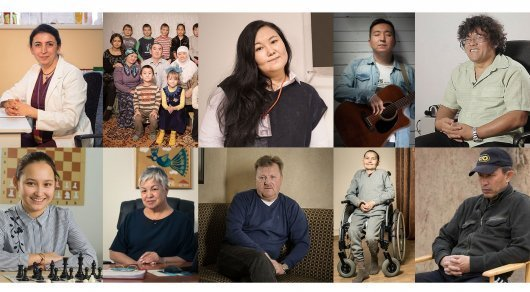 Kabylbayev is a former mullah. One day he decided to help people in another way. Everything began with a family problem: he and his wife could not have children for a long time, and when after nine years they finally had a son, they came to the joint decision to adopt 10 children of different nationalities.

A member of the social movement Rebyonok Dolzhen Zhit’ v Sem’e (A Child Must Have a Family), Kabylbayev outlined that all candidates were worthy of victory. He thanked the BI Group Holding, organising committee members and the people of Kazakhstan and offered New Year congratulations to all.

Ten citizens of Kazakhstan were nominated for the national vote. They were defender of the rights of persons with limited abilities Almaz Yerzhan; “To Be, or Not to Be” filmmaker Aziz Zairov; founder of the social project Club 28 Petel (28 Loops) Karla Nur; founder of the Zdorovaya Aziya (Healthy Asia) Fund Nagima Plokhikh; musician Azamat Temirbayev; international grandmaster Zhansaya Abdumalik; pilot Dmitry Rodin; film director Yermek Tursunov; Cheishvili and Kabylbayev.

The Organising Committee has opened bank accounts with 500,000 tenge (US$1,503) for the other eight nominees.

All of the nominees were determined to be examples worth following. Organisers filmed video clips about each nominee and wrote articles about their activities and heroism for voters to read.