By Dmitry Lee in International on 4 December 2016

ASTANA – United Arab Emirates (UAE) Chargé d’Affaires Hamad Rashed Alhebsi stressed that his country will stay committed to expanding relations with Kazakhstan in an interview with The Astana Times on the eve of the 45th anniversary of his country’s foundation, Dec. 2. 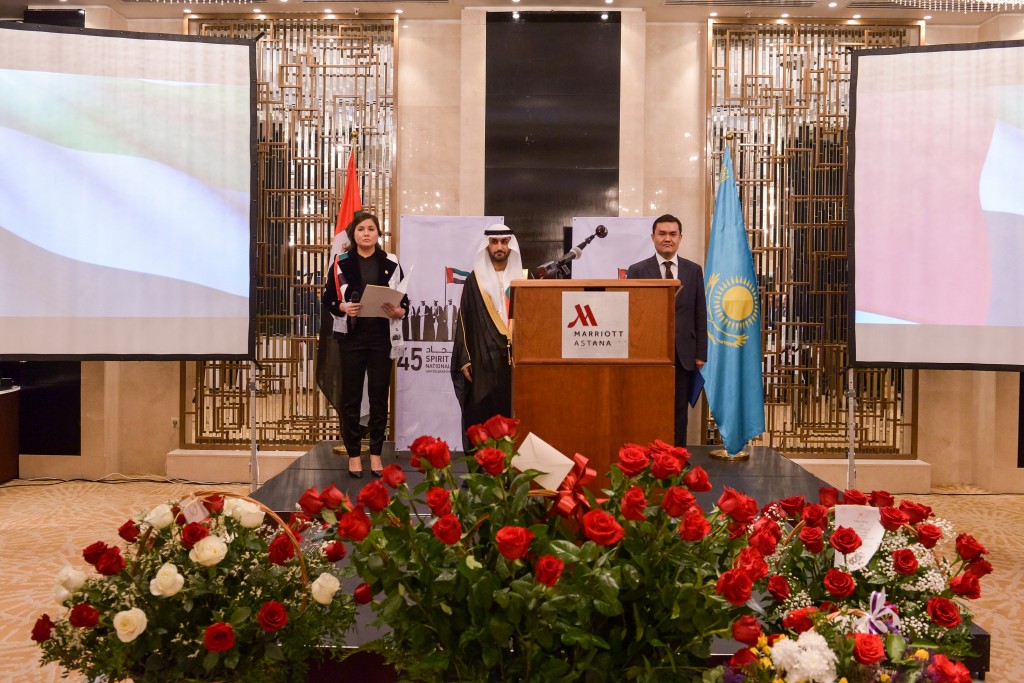 Hamad Rashed Alhebsi (C) about to deliver his opening remarks at the reception dedicated to the 45 anniversary of UAE’s national day at Marriott hotel on Nov. 28th.

President of the UAE Sheikh Khalifa bin Zayed Al Nahyan and President of Kazakhstan Nursultan Nazarbayev have a “brotherly relationship,” he said, and place great importance on their countries’ ties.

“These remarkable relations are strengthening the ties between our countries and our friendly peoples. The UAE is Kazakhstan’s major partner in the Middle East. We are committed to the development of relations with Kazakhstan in light of the great potential for cooperation in all fields. The bilateral relations that tie the two nations are the role model for many countries,” Alhebsi stressed.

One of the highlights of the year in UAE-Kazakhstan relations was the opening of a school named after Sheikh Khalifa bin Zayed in Astana in August, according to the diplomat.

There has also been an exchange of visits.

“This year mutual visits have been exchanged at various levels to maintain cordial relations. Amal Al Kubaisi, chairman of the UAE Federal National Council, paid an official visit to Kazakhstan. During the visit, she met with chairmen of the Senate and the Mazhilis [upper and lower chambers of Parliament] of Kazakhstan and took part in the first meeting of the inter-parliamentary friendship committee,” Alhebsi noted.

The histories of the two countries could be easily drawn in parallels – both are big oil players in their respective regions, both have built on emerging economies and are continuing pursuits in innovation and oil-independence. Soon enough the two countries will be drawing parallels in space exploration.

“The UAE has opened centres of thinking, creativity and innovation to encourage and spread [innovative thought] has established awards and prizes for the most proactive. Also the country announced the prospective launch of the spacecraft Hope to Mars by 2021,” Alhebsi noted.

“In addition, the country has announced a plan to decrease the oil dependence of the economy over the next 50 years, until a celebration of the last barrel released for export. To achieve this goal, the government has developed a national programme.”

Despite the downturn in the global economy, both countries are continuing to grow economically.

“The UAE has achieved the highest development indicators in all economic sectors, including in attracting foreign direct investment, which rose significantly due to the open economic policy and competitive economic environment,” Alhebsi said.

“The UAE is considered one of the largest donors of humanitarian aid, which confirms country’s commitment to the humanitarian mission and peace and stability among nations and communities, free from any kind of discrimination.”

The Chargé d’Affaires noted key priorities his country outlined recently – education and healthcare, the development of the family and the rights of women and children. The country has also established a new Ministry of Happiness and Ministry of Tolerance, headed by women, and a Ministry of Youth Affairs headed by a 22-year-old, the youngest minister in the world.

“I am happy to take this opportunity to congratulate the government and the people of Kazakhstan on their election as a non-permanent member of the Security Council for 2017-2018,” the diplomat commented. His country also congratulates Kazakhstan on its coming 25th anniversary of independence, he said.