By Kamila Zhumabayeva in Nation on 24 December 2016

ASTANA – The Armed Services Medicine Centre of the Kazakh Defence Ministry is bringing the country’s military and medical specialists’ training in line with best international practices and introducing new academic programmes and regional advances into their work, the ministry’s press service reported. 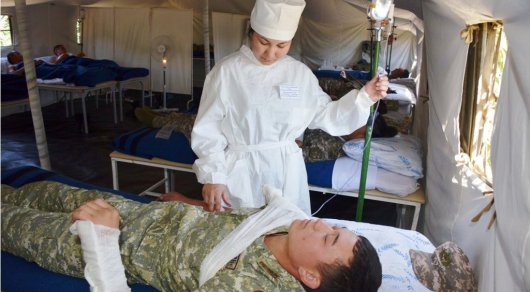 Training and development is conducted across a variety of formats, from round tables to workshops and longer curricula, the ministry said in a statement.

Specialists in armed services medicine from Kazakhstan and foreign states are invited to exchange experience and create new projects through the centre.

This year, courses were arranged for surgical medical experts of the military units and departments of Almaty’s regional garrison. Leading surgeons from Sweden conducted the training.

“It is remarkable that principles of triaging [sorting the wounded] was a separate topic explored during these curricula. This is an essentially important topic for military health professionals because in the context of violent conflict, prioritising healthcare delivery with many injured people at hand is the most difficult decision that has to be made,” the press service said.

The Armed Services Medical Centre also raised the question of training health care personnel and introducing new academic programmes while a Kazakh armed forces delegation was visiting education facilities and military-medical facilities in Tokyo. Kazakh experts explored training methods for military-medical specialists and the use of mobile hospitals there.

The Astana Times previously reported about an experimental model of a terrestrial military robot that can operate as a scout during military actions in urban centres.

This land scout robot, developed by the Military Science and Research Centre of Kazakhstan’s National Defence University, is still in the testing phase. However if the nation’s military-industrial complex becomes interested in the new technology, in two years a small batch sample might be evacuating wounded, laying mines, helping put out fires and assisting in many other important functions during military actions.