As is well-known, Kazakhstan and Uzbekistan are the most notable Central Asian states in terms of their geographic location, territory and population sizes. This concept provides the necessary dynamics for development of comprehensive cooperation between Kazakhstan and Uzbekistan, both in the fields of economy and ensuring regional security. We can state with confidence that the status of Kazakh-Uzbek relations mostly is the prerequisite for successful development of our countries and the whole region. Accordingly, permanent high-level intergovernmental dialogue and enhancement of Kazakh-Uzbek bonds corresponds to the strategic tasks and national interests of both countries. 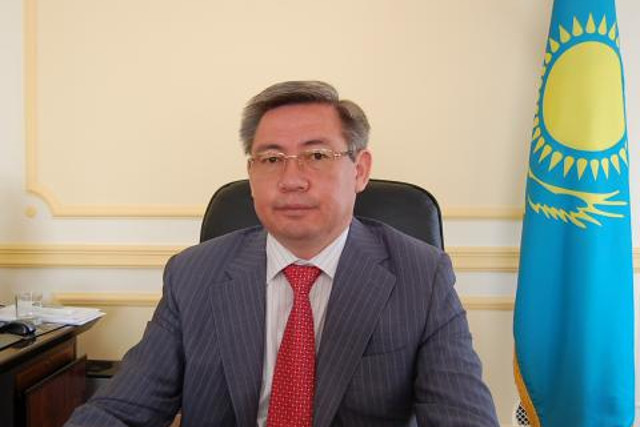 The evidence of ever-strengthening long-term strategic relations includes the visit of President of Kazakhstan Nursultan Nazarbayev to Uzbekistan and his participation at the anniversary Shanghai Cooperation Organisation Summit in Tashkent in April and June 2016 respectively. Kazakh delegations at the highest and high levels participated at the commemoration ceremony upon the passing of the first President of Uzbekistan, Islam Karimov. A Kazakh delegation headed by Prime Minister Karim Massimov participated at the farewell ceremony for the Uzbek leader on Sept. 2. Afterwards, President Nazarbayev paid a working visit to Uzbekistan on Sept. 12 when he visited the burial place of President Karimov and held a meeting with then Acting President and Prime Minister of Uzbekistan Shavkat Mirziyoyev.

Kazakhstan’s unwavering course towards development of a strategic partnership with Uzbekistan and preserving the positive dynamics of bilateral contacts at the highest and intergovernmental levels facilitated the bilateral rapprochement of positions concerning many topical international and regional issues. In particular, official Tashkent supported the following international initiatives of Astana: Kazakhstan’s bid for a non-permanent membership in the UN Security Council for 2017-2018; hosting the EXPO 2017 international specialised exhibition in Astana and the joint promotion of the Universal Declaration on the Achievement of a Nuclear-Weapon-Free World during the 70th UN General Assembly.

Strengthening collaboration on regional security issues remains topical for Astana and Tashkent as evidenced by regular contacts between law enforcement agencies of the two countries. The demarcation of state borders being implemented by the parties on the basis of a bilateral Treaty on Kazakh-Uzbek state borders is being finalised.

An important field of bilateral cooperation is trade and economic engagement, within which comprehensive contractual legal framework, including more than 50 interstate, intergovernmental and interagency instruments, have been achieved.

The bilateral document called the Basic Directions of Trade and Economic Cooperation between the Republic of Kazakhstan and the Republic of Uzbekistan was signed at the outcomes of the negotiations, as part of which, the parties agreed on the necessity to sign the intergovernmental Strategy for Economic Cooperation for 2017-2018. Particularly, the sides underlined the need to eliminate barriers, stimulate bilateral trade and made arrangements to organise a business forum in 2017 with the participation of Kazakh and Uzbek companies. They also reached an agreement on informational cooperation of customs bodies of both countries.

Meanwhile, the agenda of trade and economic relations still includes issues of the mutual opening of trading houses, undertaking of the first meetings of the Business Council and the bilateral Working Group to increase the level of commodity turnover and create acceptable conditions for missions of leading Kazakh companies in Uzbekistan, etc.

Proper attention must be paid to the potential to enhance cooperation between Kazakhstan and Uzbekistan in the field of transport and logistics. Large Uzbek projects of great interest for Kazakhstan may include: creation of high-speed railway networks, (including the new route – Tashkent-Astana-Tashkent); formation of the meridian axis of North-West Uzbekistan – South-West Uzbekistan; completion of the Angen-Pap electrified main railway lines; expansion of the highway through the Kamchik mountain pass (for smooth motor communication between Fergana valley and the other parts of the country); development of the International Intermodal Logistics Centre on the basis of the Navoi airport. Uzbekistan is expressing increased interest in the Kazakh project on reconstruction of the Beineu-Akzhigit-Uzbekistan borders motorway.

Overall, it is worth mentioning that economic relations between Kazakhstan and Uzbekistan is a priority direction in intergovernmental relations, therefore, bordering regions must play significant role in this regard, while contributing to unifying the economic potential of the two countries. Moreover, key emphasis on economic cooperation of bordering regions must be placed on the development of trade, industrial cooperation, transport and implementation of joint investment projects.

The most important issues for the bordering regions include implementation of investment projects on establishing cooperation between the Free Economic Zones (FEZ) of both countries as well as development of transport communications, cargo and passenger transportation, transit through the territories of the countries. Overall, development of transport communications in the bordering regions of Kazakhstan and Uzbekistan has the following trend: large investment projects of interest for the economies are implemented at the level of intergovernmental cooperation, while development of transport communications at the local level is implemented directly by the contiguous regions. Moreover, during implementation of cross-border and intergovernmental cooperation it would be feasible to apply effective measures such as the establishment of joint ventures, cross-border trade centres, industrial and agricultural clusters.

Nowadays, the key mechanism implementing the brand new form of cooperation between friendly states, which would facilitate strengthening cross-border cooperation and the whole spectrum of Kazakh-Uzbek cooperation, could be the Forum of Regions under the aegis of the Presidents of the Republic of Kazakhstan and the Republic of Uzbekistan, which could be held annually.

In this context, the embassy of Kazakhstan in Tashkent conducted much work on establishing direct contacts between business communities and national institutions. This October Tashkent hosted entrepreneurs from the Kyzylorda, Aktobe, and South Kazakhstan oblasts. In November, the business community of Uzbekistan was familiarised with the economic potential of the Kyzylorda oblast, while Shymkent hosted the business conference where comprehensive information about investment opportunities and creation of joint ventures, cross-border trade centres, industrial and agricultural clusters was provided.

Thanks to the constructive and wise policy of President of the Republic of Kazakhstan Nursultan Nazarbayev, our country achieved impressive results in its political and socio-economic development by its 25th anniversary of independence. Commitment and role of the capital – Astana – increased significantly, appearing as a centre for attraction of innovative ideas, flow of investments and progressive development. The capital of the Republic of Uzbekistan – Tashkent – has also been developing intensively and dynamically. With this in mind, also considering existing cooperation potential, the Embassy of Kazakhstan in Uzbekistan is proposing to conclude an agreement to establish twin city ties between our capital cities.

Obviously, a most important factor for rapprochement of our countries is multidimensional and full-scale development of cultural and humanitarian cooperation. After all, Kazakhstan and Uzbekistan share not only boundaries, but also history, culture and, in most cases, mindset.

This creates good conditions for direct communication between people through expansion of information and cultural exchanges, which will finally contribute to strengthening bilateral contacts.

Demand for cooperation between healthcare institutions, higher and general academic institutions is increasing. The long standing need appeared in improvement of cooperation in the field of archive keeping, in undertaking joint scientific-practical conferences and scientific-research projects on studying common humanitarian heritage, including through increasing the frequency of regular scientific-research trips to Uzbek archives to search documents about the history of Kazakhstan. The idea of consecutive undertaking of scientific-practical conferences in Astana and Tashkent themed Historic and Cultural Values and Authentic Traditions of People of Kazakhstan and Uzbekistan, which would gather representatives of academia of both countries, is worth proper attention, particularly in the context of the 25th anniversary since the establishment of diplomatic relations between our states.

Hereby, the role and participation of national diasporas in strengthening Kazakh-Uzbek relations must be noted. Nowadays, Uzbekistan is home for about 1.5 million ethnic Kazakhs. Ministries of culture of both countries are drafting an interagency agreement, which stipulates organising traditional days and decades of culture of Kazakhstan and Uzbekistan, organising tours and performances of folk orchestras, opening days of painters, exhibitions of applied arts and more.

I am convinced that our people are vitally interested in the enhancement of Kazakh-Uzbek intergovernmental and interagency contacts at all levels. After all, Kazakhstan and Uzbekistan share infinite opportunities to strengthen mutually advantageous cooperation in a variety of fields.

The author is Ambassador of Kazakhstan to Uzbekistan.