By Malika Orazgaliyeva in International on 28 December 2016

ASTANA – Minister of Foreign Affairs of Kazakhstan Erlan Idrissov reported on the main results of the ministry’s activities in 2016 and highlighted the coming tasks of Kazakh diplomacy for 2017 during his traditional annual briefing on Dec.27. 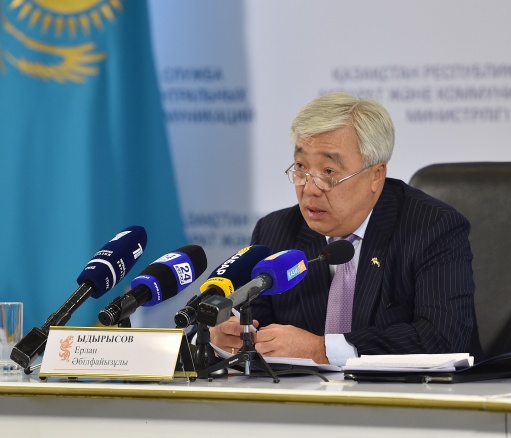 “The year 2016 has been marked by Kazakhstan’s 25 years of independence. Today our country has become a responsible and respected citizen of the world. The country … has become a recognised leader in the field of nuclear disarmament and an active moderator in the dialogue of cultures, religions and civilisation,” Idrissov said.

The minister noted that the President’s initiatives, such as convening the Conference on Interaction and Confidence-Building Measures in Asia (CICA) and Congress of Leaders of World and Traditional Religions, as well as the country’s chairmanship in the Organisation for Security and Co-operation in Europe (OSCE), the Commonwealth of Independent States (CIS), the Collective Security Treaty Organisation (CSTO), the Organisation of Islamic Cooperation (OIC), the Shanghai Cooperation Organisation (SCO) and the Turkic Council played a role in boosting Kazakhstan to among the most dynamically developing countries. Consequently, a growing number of states see Kazakhstan as an effective mediator in the peaceful settlement of acute regional conflicts.

“President Nazarbayev has played a key part in healing the Russo-Turkish rift; in bringing about the Minsk-1 and Minsk-2 agreements regarding Ukraine,” Idrissov said.

“In recent days, Kazakhstan has been asked to contribute to resolving the conflict in Syria by hosting fresh talks,” he added.

The main achievement of Kazakh diplomacy in 2016 was the election of the state as a non-permanent member of the UN Security Council for 2017–2018.

“Central Asia will be represented in the UNSC for the first time in its history. Our membership is a chance to attract the attention of the Council to regional security issues. We recognise the tight connection between security and sustainable development. Our goal at the UNSC is to represent Central Asia so that two years of our membership benefit Kazakhstan and the region,” Idrissov said.

Idrissov reported that Nazarbayev has appealed to the leaders of all the Central Asian countries to develop a region-wide platform for Kazakhstan to promote at the UNSC.

He emphasised that Kazakhstan’s membership in the UNSC will involve chairmanships in three committees: on Afghanistan, ISIS/DAESH/Al-Qaeda and Eritrea/Somalia. He also stressed that during Kazakhstan’s rotating chairmanship of the UN Security Council in January 2018 it will seek to get a relevant resolution on Afghanistan and Central Asia adopted.

“In accordance with the President’s instructions, economising the foreign policy of Kazakhstan is our top priority. More than 300 relevant events were organised abroad in 2016,” Idrissov said.

Thus, the Foreign Ministry’s activities were geared toward attracting foreign investment, improving the investment climate, promoting export products in overseas markets and implementing the transit and transport potential of Kazakhstan.

“We have carried out significant liberalisation of the visa regime. The investment headquarters under the Prime Minister, which works with investment policy, began its operations. Investment advisors were sent to our missions. The front offices of the National Agency for Export and Investment KAZNEX INVEST and trade missions were established abroad,” Idrissov noted.

According to the minister, the expansion of cooperation on major infrastructure projects with international financial institutions, including the World Bank, International Monetary Fund (IMF), European Bank for Reconstruction and Development (EBRD), Asian Development Bank (ADB), Islamic Development Bank (IDB) and Asian Infrastructure Investment Bank (AIIB) also received focus. More than 30 international agreements on large-scale funding of key sectors of Kazakhstan’s socio-economic projects were conducted. In general, Kazakhstan attracted $20 billion of foreign direct investment in 2016. “We work closely with our largest neighbours and strategic partners Russia and China. The strategic partnership with the United States is dynamically developing. We are optimistic about prospects of future cooperation with the administration of Donald Trump. The European Union is our largest trading and investment partner. We do active work on developing mutually beneficial cooperation with the brotherly states of Central Asia. We are looking forward to cooperation with Uzbekistan and newly elected President Shavkat Mirziyoyev. Relations with the key countries of the Arab world, Asia, Africa and Latin America are also in progress,” Idrissov said. He further dwelled on relations with Uzbekistan when responding to questions stressing that Astana welcomes new beginnings in Uzbekistan’s relations with regional neighbours and, together with Tashkent, is working on a 10-year trade and economic cooperation programme.

According to Idrissov, the past year was productive for President Nazarbayev’s international activities, who conducted official visits to 21 states and met 15 foreign heads of state, government and international organisation in Astana. In total, 49 international events and 81 bilateral visits were carried out.

The Foreign Ministry has also ensured broad and meaningful participation of foreign countries in EXPO 2017.

“As of today, we received confirmation of participation from 112 countries and 18 international organisations. There are 91 agreements of participation signed and 103 national section commissioners appointed,” Idrissov said, and the campaign continues.

“We continue working on leaving a good legacy from EXPO 2017. One such legacy is the Astana International Financial Centre (AIFC), which aims to turn Astana into a regional financial hub by creating favourable and attractive conditions for investment and finance. Another legacy of EXPO 2017 will be the International Centre for Transfer of Green Technologies under UN auspices,” he explained.

On the eve of EXPO 2017 in Astana and Winter Universiade 2017 in Almaty, the ministry continues the work on visa facilitation and increasing the efficiency of migration control and security in order to create relaxed conditions for foreign guests.

Idrissov announced that as of Jan. 1, 2017, citizens of 45 nations will have an opportunity for 30-day visa-free travel to Kazakhstan including nationals of member states of the Organisation for Economic Co-operation and Development (OECD) and the European Union (EU), as well as Malaysia, Monaco, Singapore and the United Arab Emirates (UAE). The Kazakh foreign minister went on to say that Astana will be seeking to begin negotiations with the European Union on visa facilitation next year, which is a subject very high on the agenda for both the ministry and the Kazakh citizens who have increasingly demanded less burdensome process of getting their Schengen visas.

Regarding plans to enter the Organisation for Economic Co-operation and Development, Idrissov said, “We work hard to move closer to OECD standards and will continue to advance.”

Next year the ministry plans to strengthen coordinated work on attracting foreign investments and developing and promoting the AIFC.

“Implementing the Foreign Policy Concept of Kazakhstan for 2014–2020 will continue. We intend to give full support to the efforts to resolve the situation in Ukraine on the basis of the Minsk agreements. Through careful monitoring and analysis of [international developments] we will develop proposals for their solution,” Idrissov added.

In addition, Idrissov noted that EXPO 2017 will be a platform for discussing global and regional problems and finding the right solutions, making it a place where important preparation for other major international events can take place.

An important event in the coming year is the 25th anniversary of CICA. Today, CICA is a credible, effective global cooperation platform of 26 Asian countries, stretching from Egypt and Israel to China and Vietnam in the field of security, new challenges and risks, Idrissov noted.