By Anuar Abdrakhmanov in Sports on 7 December 2016

ASTANA – Kairat won every match it played in the end of November in Group A of the UEFA Futsal Elite Round and has secured a place in the four-team finals next April. 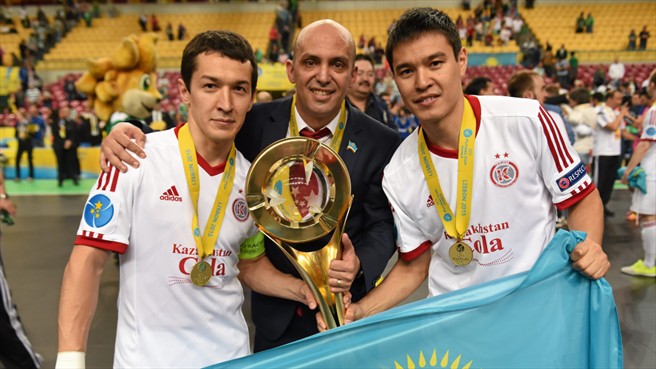 From November 24–27, Almaty hosted Group A matches.  In the first match, two-time tournament winner Kairat narrowly beat Italy’s Real Rieti, 3:2. The Kazakh club, led by Brazilian manager Cacau, went ahead in the third minute through Divanei’s effort. Sixteen minutes later, Jeff equalised for the visitors but a mere 53 seconds later Douglas Jr. put the Kazakhs ahead again. Early in the second half, the Italians restored balance once more, but Kairat carried victory away in the final minutes of the match, when Divanei converted a penalty kick and secured a late edge for the hosts.

In the next game, the Almaty club left no chances to Fenix Kosovo, 6:0. Twenty-nine seconds into the game, Divanei opened the score. Fourteen minutes later, the Brazilian scored his second goal in the match and the fourth in the tournament. In the 18th minute, Kairat striker Zoltan Droth scored the team’s third goal. In the second half he was joined by Douglas Jr., Dauren Nurgozhin and Tayeubi.

In the group stage’s last match Kairat played FK Nikars Riga and secured yet another win, 4:1. Igor and Divanei contributed notably to the success, with the latter scoring a hat trick, thus becoming the best scorer of the tournament. The only goal for the Latvian team was an own goal from Neto.

“The game developed positively for us. All that the coach conceived was performed, as we played tactically right and managed to score an early goal. Plus, local fans helped us a lot, motivating the players throughout the game. We were not thinking of the final of four. For us, each game was important. Now there is plenty of time to think about the next stage,” Kairat captain Dinmukhamet Suleimenov commented after the tournament.

“It is always nice to play at home, in Almaty. The fans supported us and encouraged in difficult moments. The most important thing that we earned is the first place in the group. This year we have already won the national championships and the Cup of Kazakhstan, and next year the finals of four are expecting us. There, teams with top-level players will oppose us. Closer to the tournament itself, we will look through videos of their games, analyse the strengths and weaknesses of our rivals,” said Kairat goalkeeper Higuita.

This year, Ugra Yugorsk of Russia is also participating in the finals, along with Inter FS of Spain and Sporting Lisbon of Portugal.