By Malika Orazgaliyeva in International on 16 December 2016

According to Nazarbayev, the sides held an open and constructive dialogue. They paid special attention to trade and economic issues that are being negatively influenced by the unfavourable situation in the global market. Nazarbayev and Netanyahu discussed ways to stimulate economic cooperation, as well as the Kazakh-Israeli partnership and cooperation in the spheres of investment, innovative technologies and agriculture, the press service of Akorda reported. 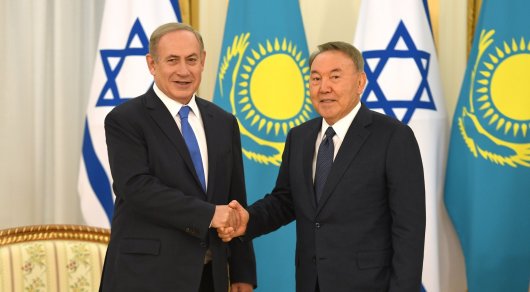 The parties reached agreements on restoration of direct flights and introduction of a visa-free regime between Kazakhstan and Israel. Such measures should deepen bilateral business contacts and cooperation in tourism, the two leaders said.

Nazarbayev noted that Netanyahu’s visit takes place on the eve of the celebration the 25th anniversary of independence of Kazakhstan.

“Throughout all these years, Kazakhstan and Israel have maintained a good relationship. Big Jewish diaspora living in Kazakhstan and the Kazakh community living in Israel are the bridge for constructive relations between our peoples,” he said.

“The world is going through big security challenges. However, these changes offer great opportunities, in particular in the field of new technologies, which are closely related to any sector of the economy,” Netanyahu said.

Netanyahu pointed out that his country has succeeded in two areas: safety and new technologies.

“Today, I propose to combine the strategic development plans and opportunities of Kazakhstan and Israel for the benefit of the two nations,” Netanyahu stressed.

Nazarbayev pointed out that this proposal coincides with the plans of the Kazakh side.

During the meeting, Nazarbayev noted the importance of building in Almaty a Kazakh-Israeli innovation centre, which will include a world-class college and university.

“Thousands of medical workers of Kazakhstan have been trained in Israel. Annually, your professionals hold workshops on the basis of Kazakhstan’s medical centres. We believe that this cooperation shall be expanded. In this regard, we are ready to consider the possibility of transferring a number of university clinics to trust management of Israeli organisations,” Nazarbayev added.

The Israeli side has expressed interest in the use of Kazakhstan’s transit-transport potential to deepen bilateral cooperation. In addition, the prospect of cooperation with the Astana International Financial Centre, as well as the participation of advanced Israeli technologies in the field of renewable energy sources at the international exhibition EXPO 2017 were discussed.

Sagintayev said that infrastructure, agriculture, new technologies and innovations are of a highest priority in the cooperation of the two countries. He also pointed out great prospects for cooperation in the framework of public-private partnerships.

“Taking into account Israel’s experience, we invite you not only in the large-scale investment projects, but also in the small- and medium-size businesses,” Sagintayev noted.

According to Sagintayev, the forum opened new directions for interaction between the Israeli and Kazakh business circles.

In addition, Netanyahu met with Chairman of the Senate of the Parliament of Kazakhstan Kassym-Jomart Tokayev.

Tokayev expressed confidence that the results of Netanyahu’s negotiations with Nazarbayev will serve as a powerful impulse to expanding bilateral cooperation.

According to Tokayev, Kazakh parliamentarians expect to strengthen the dialogue and interaction with Israel. He told the guest about the role of the Senate in the political system of Kazakhstan and legislative support of the institutional reforms initiated by the Kazakh President. During the conversation, the parties exchanged opinions on political, economic and humanitarian cooperation.

Netanyahu told Tokayev that his visit to Astana, the first ever by an Israeli head of government, sought to enhance traditionally friendly Kazakhstan-Israeli relations.