By Aigerim Seisembayeva in International on 23 December 2016

ASTANA – President of Iran Hassan Rouhani paid an official visit to Kazakhstan on Dec. 22 which saw the signing of several bilateral agreements after his talks with President Nursultan Nazarbayev focusing on investment, trade, economic, transit, transport and agricultural sectors. 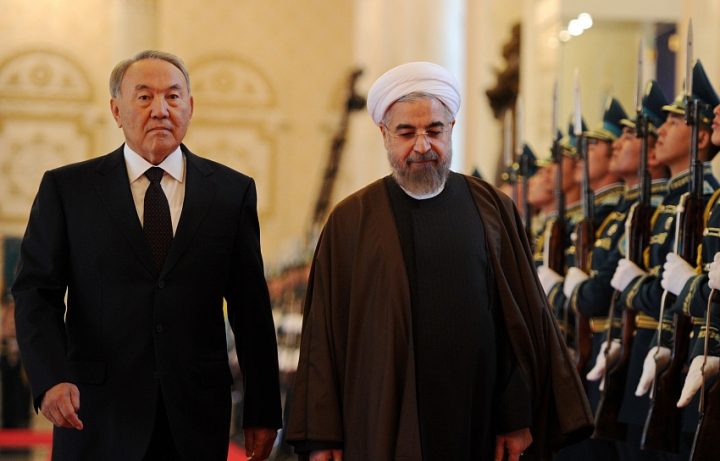 During the visit, the two sides signed government to government agreements on cooperation in veterinary medicine and animal health and maritime merchant shipping. Kazakhstan’s Ministry of Investment and Development and Iran’s Organisation of Applied Arts and Tourism agreed to work on mutual simplification of group tourist trips and Kazakhstan’s Ministry of Health and Social Development and Iran’s Ministry of Cooperation, Labour and Social Security signed a memorandum of understanding on cooperation in labour and social security issues. Finally, the National Bank of Kazakhstan and the Central Bank of Iran signed a memorandum of understanding on assistance in the organisation of bilateral trade.

During the talks, Nazarbayev pointed out that numerous high-level meetings testify to the friendly relations between Kazakhstan and Iran. “I believe that the lifting of economic sanctions against Iran is a result of your efforts,” Nazarbayev said.

“Since gaining independence, Kazakhstan’s friendly policy toward Iran has remained unchanged. Now is the time for bringing our cooperation to a strategic level and Kazakhstan is ready to work closely together,” he said.

Rouhani congratulated the President on Kazakhstan’s 25th anniversary of independence, noting that Iran attaches great importance to developing partnership with Kazakhstan. “Our policy has always been aimed at strengthening good neighbourly relations with all neighbouring countries. Your visit to Iran in April this year was of great importance for the further development of bilateral relations,” the Iranian president said.

Nazarbayev stressed that Iran is an important partner and a friendly country for Kazakhstan in the Islamic world. He also noted Iran’s large contribution to the process of nuclear disarmament, noting the rapid growth of its economy after the lifting of sanctions, and expressed hope that Iran’s current policy will have a positive effect on all Caspian states.

At a joint press conference after the talks in Akorda, Nazarbayev reported that the two leaders discussed a host of cooperation possibilities as well as the implementation of previous agreements. He focused on projects being implemented in the framework of commercial agreements worth over $1 billion signed between the two countries. “The work is in process; however, we must make extra effort. We still have a lot of joint projects to come,” Nazarbayev said.

He also stressed the “close and trusting relationship” the countries had established. Nazarbayev pointed out Iran’s support for Kazakhstan’s foreign policy initiatives, as well as Kazakhstan’s consistent support for Tehran during the long international negotiations over its nuclear programme. He also emphasised Kazakhstan’s role in finding a solution by hosting two rounds of talks on Iran’s nuclear programme. Among the promising areas for current bilateral cooperation Nazarbayev pointed out are the mutual unlocking of potential in the transit-transport sector, including cooperation in the railway sector; the establishment of long-term joint ventures in the agricultural sector; and cooperation in the mining and metallurgical industry.

Nazarbayev stated that during the talks the sides also exchanged views on international and regional issues. “We expressed solidarity in the fight against the spread of Islamophobia and the erroneous identification of Islam with terrorism and jihadism. An agreement was reached to strengthen the political influence of the two countries within the framework of international organisations such as the UN, the Organisation of Islamic Cooperation, and the SCO [Shanghai Cooperation Organisation],” he said.

The visit from Rouhani came just days after the foreign ministers of Iran, Russia and Turkey met in Moscow to discuss the efforts to stop the war in Syria welcoming the offer by the Kazakh President to hold fresh talks between the Syrian government and opposition in Astana. Rouhani’s visit to the capital also came just a week after Prime Minister Benjamin Netanyahu paid the first ever visit of the Israeli head of government to Kazakhstan.