Hunters Show off Speed of Their Dogs in Karaganda

By Azamat Syzdykbayev in Nation on 24 December 2016

ASTANA – Hunters recently showed off the speed of their Kazakh borzoi (dog breeds) at a competition during a traditional hunters’ kurultai (meeting) in Karaganda. 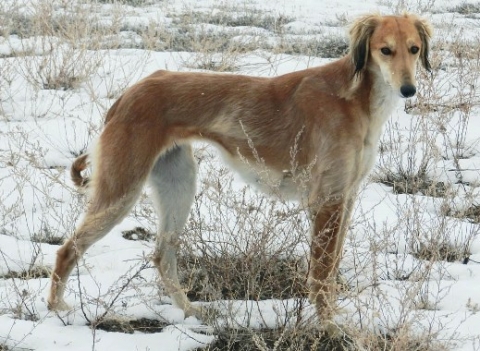 “Today’s race must confirm the tazy’s (type of Kazakh borzoi dog) endurance. Kazakh borzoi should overcome 300 metres in a certain time. The fact that the lure is a mechanical hare, a never yet seen animal for the tazy complicates the competition. Yes, the distance is short for a Kazakh tazy. The dog can run for days,” said one participant.

“We are now selecting the best breeder. We watch their offspring [to make sure they are Kazakh tazy]. When puppies are born they appeared to be Russian borzaya on the outside. We keep them out. It is the breeding work on tazy being conducted,” Chief Cynologyst, or dog handler, of the Kansonar National Hunters Association Inna Nazarenko said.

No more than 200 pureblood tazy live in Kazakhstan today. Kazakh tazy is an ancient dog breed well suited to the nomadic way of life of the Asian peoples. Their numerous depictions on petroglyphs in south Kazakhstan are dated to different historic eras. The Persian saluki greyhound is believed to be the most likely ancestor of the tazy.

The tazy, however, is not yet recognised by the World Canine Organisation (the Fédération Cynologique Internationale). Domestic experts are trying to boost the image of the breed, which many consider a national attribute.

“We continue the tradition of our ancestors to revive the pureblood tazy breed. As a matter of principle, these dogs are not picky and they are smart. This breed is considered number one in Kazakhstan because they are our favourite,” dog breeder Asset Shaltayev shared.

In addition to dog racing, the event also included a traditional hunt with an eagle, said Shaltayev added.