By Aigerim Seisembayeva in International on 28 December 2016 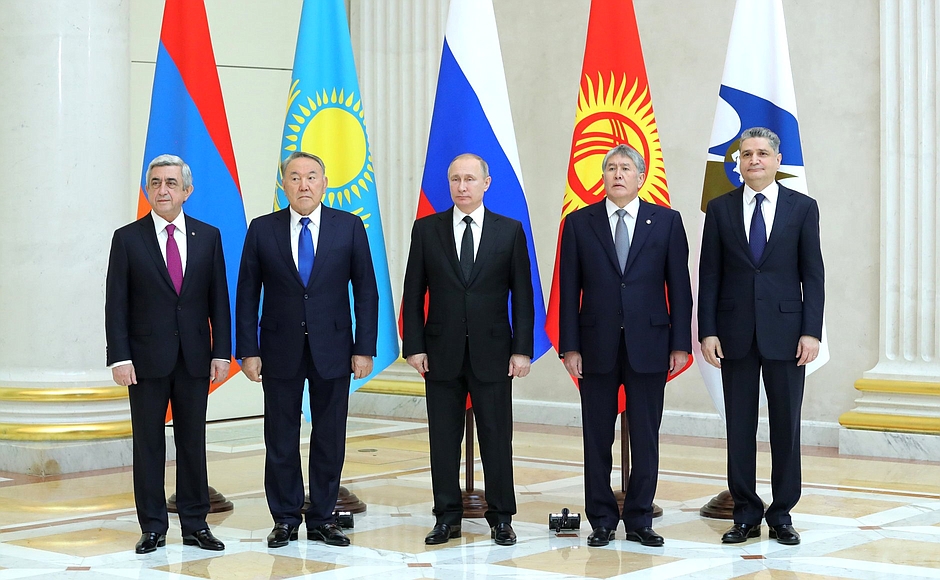 The new code will replace regulations adopted in 2009 and was signed following a Supreme Eurasian Economic Council (SEEC) meeting in St. Petersburg attended by the presidents of Russia, Armenia, Kazakhstan, Kyrgyzstan and Russia. Alexander Lukashenko, the President of Belarus which is the fifth member of the EAEU, did not participate in the meeting.

The new unified code, which is expected to come into force July 1, 2017, took three years to write and seeks to make customs operations more transparent. It will also better facilitate interaction between businesses and government agencies while reducing paperwork and physical contact with officials.

When the new document enters into force, the Eurasian Economic Commission will determine upper cost and weight thresholds for free trade which will be common for all countries. Parties, in their turn, can establish lower rates of duty-free importation on a national level in respect of goods transported by international mail and express carriers.

EAEU members have agreed that one year after the entry into force of the new Customs Code, in 2018, the threshold for the duty-free import of goods from foreign online stores into EAEU countries will be lowered.

President of Kazakhstan Nursultan Nazarbayev, speaking at the meeting, also noted the completion of an electricity market development programme, preparations for a liberalisation plan for the services sector and the launch of the common EAEU financial market. He also said international cooperation has improved under Kazakhstan’s EAEU chairmanship in 2016.

“We made good progress in this direction. In October, an agreement on a free trade zone with Vietnam entered into force. We are considering starting negotiations on the establishment of similar zones with Iran, India, Singapore and Egypt. Over 25 memoranda of cooperation and interaction with various countries have been signed. We are aiming at combining the Silk Road Economic Belt with our Union, and searching for common ground with the European Union and the Shanghai Cooperation Organisation,” Nazarbayev stated.

He also noted that negotiations are being held on trade agreements with China and Israel and that there is interest in the EAEU from South American states.

Nazarbayev also said the logical step in the development of EAEU international economic relations is a statement on trade policy development, which outlines the principles of cooperation with foreign partners.

“At the same time, we must not forget that the work on trade agreements has to be systematic, most pragmatic and take into account the interests of all members of our Union. It is important to carefully analyse the structure of tariff commitments, the list of possible exemptions with regard to our capabilities and limitations, assessing all risks and new opportunities,” Nazarbayev said.

The President of Kazakhstan pointed out a number of factors affecting the work of the EAEU, including the deterioration of global economic conditions and unresolved internal issues of the Union.

“The special role of tackling problems should be given to the Eurasian Economic Commission. Today it is important to look beyond crisis and develop systemic and long-term solutions to build the strategy of the EAEU development. In this connection it is necessary to create an anti-crisis council. If the heads of state support this, I propose to entrust the Commission, together with our governments, to consider this issue and make an appropriate decision,” Nazarbayev stated.

In conclusion, the head of state wished Kyrgyzstan’s leadership a successful EAEU chairmanship next year.

Nazarbayev also held a bilateral meeting with Russian President Vladimir Putin and noted the effective cooperation between Kazakhstan and Russia in the framework of the EAEU.

“Our relations are advancing. Questions arise, but we solve them at governmental level. We have discussed the issues of further development of Baikonur and worked out a respective eight-year-long road map,” Nazarbayev highlighted.

In turn, Putin praised Kazakhstan for its dedication to the integration process. “The fact that a successful country is actively promoting an integration project has a positive impact on all parties to the EAEU,” Putin said.

The bilateral meeting included the signing of agreements increasing cooperation on the Baikonur Cosmodrome complex, the Protocol on Amendments to the Intergovernmental Agreement on the status of the city of Baikonur, the order of formation and the status of its executive bodies as of 23 December 1995, concerning the list of state bodies of the Republic of Kazakhstan.

The Kazakh and Russia leaders also issued a statement on the crash of the Russian Defence Ministry’s plane near Sochi on Dec. 25 in which 92 people died and Nazarbayev again expressed condolences to the people of Russia.

“We know how complicated the relations in many regions of the world are. The number of troubled regions is not decreasing,” Russian President Vladimir Putin said at the opening of the event.

Nazarbayev expressed Kazakhstan’s intention to further develop military cooperation with the Russian Federation and Kazakhstan’s readiness to provide a platform in Astana for talks on the Syrian conflict.

Putin congratulated Nazarbayev on the 25th anniversary of Kazakhstan’s independence, noting the achievements of the country during this period.

While in St. Petersburg, Nazarbayev, along with Putin, also visited from Diakont and Biokad companies. Diakont is one of the only two companies in the world producing radiation-resistant lens zooms and one of the global leaders in developing and producing specialised equipment to ensure security in science intensive industries. The two presidents were shown a compact synchronous motor and other equipment. Biokad is Russia’s leading innovative company with full cycle of drug development.