By Staff Report in Central Asia, Nation on 20 December 2016 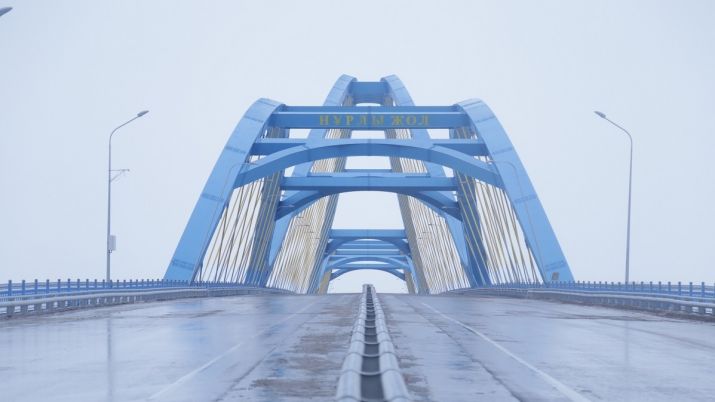 “Today we are witnessing a historic day. We are opening this important facility. I congratulate all residents on this significant event,” Pavlodar Region Akim (Governor) Bolat Bakauov told the gathering, which included Energy Minister and former regional governor Kanat Bozumbayev, Chairperson of KazAvtoZhol Yermek Kizatov and Chairperson of the Highways Committee Mereke Pshembayev.

The arch bridge was erected according to the latest technologies with the use of flexible inclined suspension and cables. HeavyLifting Swiss technology using a specialised hydraulic system of cables and jacks was applied in Kazakhstan for the first time to build the bridge. The total length of the bridge is 12.3 kilometres. To construct the bridge, 13,500 tonnes of steel and 150,000 cubic metres of concrete were used.

Local producers provided road-building materials such as crushed stone, cement and asphalt. Residents of the surrounding villages produced 42-metre beams span structures that were delivered to the site.

The construction involved nearly 1,800 people, 700 vehicles and six units of river crossings. Approximately 100 small and medium-sized enterprises of the Pavlodar region provided transportation services and food for the bridge builders.

The roadway with the capacity of almost 10,000 vehicles per day is divided into four lanes. The new road is expected to cut the path for cars by more than 40 kilometres.

According to KazAvtoZhol staff, the bridge across the Irtysh River will relieve the road network and will optimise Pavlodar transport and transit flows.

In September, President Nursultan Nazarbayev visited the bridge construction site and approved the proposal of local community to name the facility in honour of the 25th anniversary of Kazakhstan’s Independence. The President stressed that this facility is the country’s largest infrastructure project implemented during the global economic crisis.

To mark the main national holiday of Kazakhstan, 930 more kilometres of new roads in the major sections of Almaty-Khorgos, Almaty-Taldykorgan, Beineu-Shetpe, Kokshetau-Petropavlovsk, Shymkent-Tashkent (Uzbekistan) and Shymkent-border of the Zhambyl region were commissioned across the country. In addition, a new bridge over the Tobol River has opened in Kostanai.