By Serzhan Bekturov in Nation on 10 December 2016

At Atyrau’s first English & STEM Festival, discovery was the word of the day. Youth and children, along with their families, immersed themselves into the world of engineering, robotics and 3D modelling, and took a journey to Shakespeare’s language and culture at Atyrau State University. 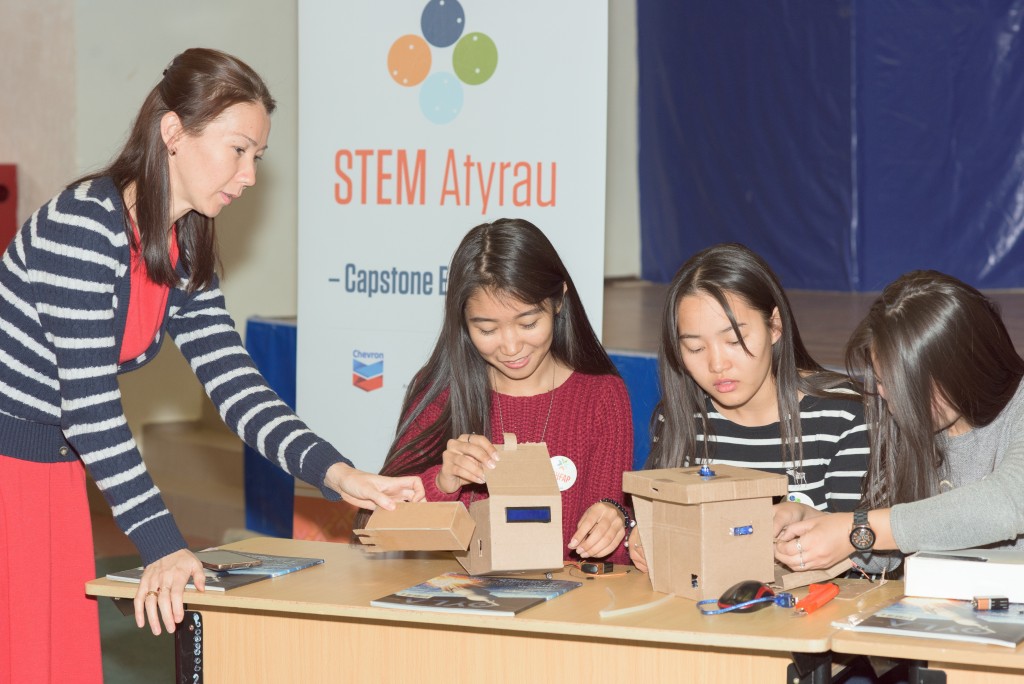 The STEM Atyrau zone offered attendees demo STEM education programmes by IYF local partners. Master classes on project-based learning, 3-D modelling, programming, robotics and engineering were organised by Bolashak Engineering. Another STEM partner, Sumato Batys, arranged robotics competitions and a Capstone Exhibition for the youth. There was a workshop on engineering for teachers, so that no students are left behind in STEM activities.

“There is a great demand for STEM programmes in our society… Science is very important for the development of the country, because it is related to the economy and to the potential of technology in general. We hope that these youngsters who are here today will be successful scientists, entrepreneurs and managers raising the country to new heights in the future.”

The hopes expressed by regional leadership are reflected in the aspirations of young people. Azamat Sakeshev, 11, said, “The festival is wonderful. Today I really enjoyed collecting robots from different wires. By discovering Arduino boards [an open-source microcontroller platform] we can create various robots. If we continue working on this, Atyrau will become a very developed city.”

Although STEM disciplines tend to be thought of as male-dominated, the festival’s STEM activities attracted both girls and boys. Providing equal and relevant opportunities for both genders to learn is at the heart of the Zangar programme. Sharing excitement over programming and robotics competitions, Indira Batyrgazy, 14, and her friend Aliya Myrzagaliyeva, 15, said,

“It is very interesting at the fest. We have already done many things around here. When we see something like a robot, then we want to create it. But, we know that we need to acquire programming skills first. Once we have those skills, we can use them in the future, regardless of the profession we choose, since it is important to have a well-rounded skill set.”

A remarkable part of the English & STEM Fest were tours of the Fab Lab, a fabrication laboratory now available to Atyrau youth through Chevron’s support. During the tour, groups of young people were guided by Fab Lab manager Mariya Li, who presented a short workshop on the Rhino design programme that then helped participants produce souvenirs for themselves using a laser cutter.

For many participants, the festival was a family event, stirring interest among young citizens and their parents. Parents appreciated it as an opportunity to encourage their children’s interest in STEM education. As Sergey Shutov, father of eight-year-old Leonid, pointed out, “Today’s festival is a very interesting and informative event that helps promote STEM education and beginning to innovate while they are still in school, not just when they get older and need to think about more vital things. It allows children to choose the direction of their education now. Leonid liked programming, 3D modelling, engineering…”

“… and Scratch,” added Leonid himself. “I like that I can create my sprites [objects that perform actions in a project] and that I can perform miracles with these sprites.”

The Atyrau English & STEM Festival was jointly organised by IYF, the British Council and Atyrau University. Organisers hope it will result in higher enrolment in different STEM programmes offered to young people within the Zangar programme, and it will become a tradition for the greater Atyrau community.