By Dmitry Lee in International on 29 November 2016

ASTANA – Internationally recognised speakers, scholars and politicians presented reports and spoke about Kazakhstan’s achievements and future during the Nov. 28 international conference, 25 Years of Independence of the Republic of Kazakhstan: Outcomes. Accomplishments. Vision for the Future. The conference was part of the celebrations of country’s quarter century of independence on Dec. 16. 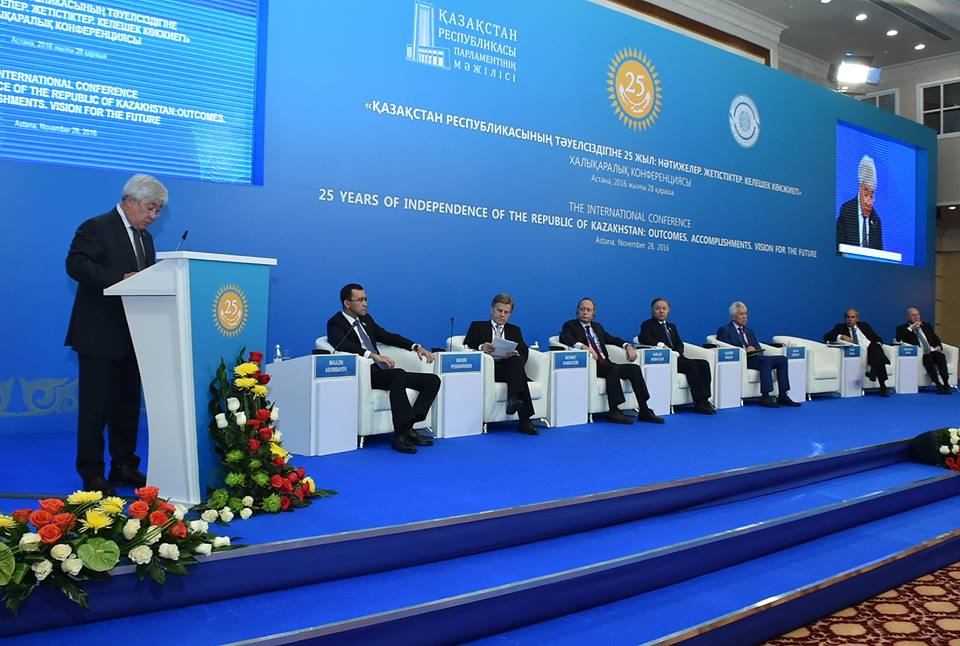 “For Kazakhstan, the slowing global economic climate that hit Russia and China and the low oil prices have triggered a re-evaluation of the budget and of future priorities,” Senior Fellow at the Atlantic Council, Director of the Centre for Energy, Natural Resources and Geopolitics of the Washington, DC-based Institute of Analysis of Global Security Dr. Ariel Cohen said  in his remarks.

He is sure, however, that “these developments can present Kazakhstan with new opportunities for growth.”

Speaking of the future of U.S.-Kazakh relations, Cohen believes the Trump administration will take a realist approach towards Central Asia.

“One hopes that it will be open to dialogue and be more concerned with both countries’ national interests – not with regime change,” he said, citing Ian Bremmer, the president and founder of Eurasia Group, a global political risk research and consulting firm, who said that the new U.S. administration will likely conduct a fundamental reassessment of United States’ “role as world policeman, architect of global trade and cheerleader of global values.”

According to Cohen, the new U.S. foreign policy approaches will be the “defining factors, while Kazakhstan deals with an assertive Russia, a rising China and the continuing threat of terrorism.”

“Kazakhstan can be a bridge in this triangle as it plays a role of the pillar of stability, an intermediary and promoter of both moderation and modernisation. We will likely see an administration willing to understand Kazakhstan’s national interests and work in ways that would be beneficial for both nations. This is an opportunity for Kazakhstan to develop an even more productive relationship with the U.S. administration that is fundamentally different from its predecessors,” he said.

Multiple speakers, including Cohen, made predictions and recommendations for the country’s chairmanship of the United Nations Security Council for 2017-2018.

On June 28, Kazakhstan became the first Central Asian country to secure a non-permanent seat on the United Nations Security Council (UNSC). Indeed, if Kazakhstan prepares the ground early for a balanced and proactive UNSC membership, it can affect national, regional and global politics and development. Astana demonstrated its capability in the case of Iran’s nuclear programme negotiations, push for non-proliferation and assistance with fighting against terrorism, Cohen said.

According to Member of Kazakhstan’s Senate Byrganym Aitimova, Kazakhstan’s integration into the world community played a vital role in its election for the UNSC seat.

“By renouncing nuclear weapons, Kazakhstan integrated into the word community,” she said. “Also, such Kazakhstan proposal as to declare Aug. 29 as the International Day against Nuclear Tests, which has been adopted by the UN, helped us strengthen our argument that Kazakhstan should be selected to the UNSC for 2017-2018, as did all the efforts the country has performed in its quest for global peace.”

Professor Gregory Gleason, director of the Central Asia Programme at the George C. Marshall European Centre for Security Studies in Germany, noted many supporters “applauded when Kazakhstan joined the ranks of the members of the UN Security Council.”

“This is an apt and fitting forum for leadership in the areas where Kazakhstan’s law-based domestic policies and multi-vectoral foreign policies have been so successful. Kazakhstan’s early and indefatigable support of economic integration and avoiding autarky and narrow protectionism has kept Kazakhstan growing and developing.”

Gleason believes Kazakhstan’s commitment to multi-confessionalism and religious tolerance has earned the country respect from all religious beliefs and has served as a beacon to all the countries in Eurasia and south Asia, he said.

“Kazakhstan’s law-based regulatory framework for equitable and non-discriminatory commercial relations has made it possible for producers, traders and consumers to pursue commercial exchange in a socially responsible context. Kazakhstan’s dedication to the goals of environmental protection and sustainable economic development have set standards for developed and developing countries alike. And Kazakhstan’s commitment to the dismantlement, prohibition and ultimate elimination of all nuclear weapons has set an example for the whole world and set a standard of behaviour which I am confident Kazakh diplomats will take with them when they join the ranks of the officials in the UN Security Council,” Gleason continued.

Another speaker, Dr. Johan Engvall, research fellow at the Stockholm-based Institute for Security and Development Policy, believes that the driver for success for Kazakhstan and the whole region is interaction.

“To realise the emergence of Kazakhstan and the rest of Central Asia as a land bridge connecting China and India with Europe, a priority should be to strengthen regional contacts and interaction within Central Asia itself. Moreover, in thinking about new trade routes, the focus on big hard infrastructure projects led by governments must be complemented by facilitating private initiatives in all the areas of ‘soft’ infrastructure that makes trade possible, including logistics, warehousing, financial services, insurances,” he emphasised.