Shares of Major National Companies to Be Listed at AIFC

ASTANA – Minister of National Economy Kuandyk Bishimbayev stated recently that shares of major national companies will be listed at the Astana International Financial Centre (AIFC). He said there are several companies that will undergo privatisation, including those in the “Top 65,” which contains the largest companies of Kazakhstan, nine of which are the flagships of Kazakhstan’s industry. 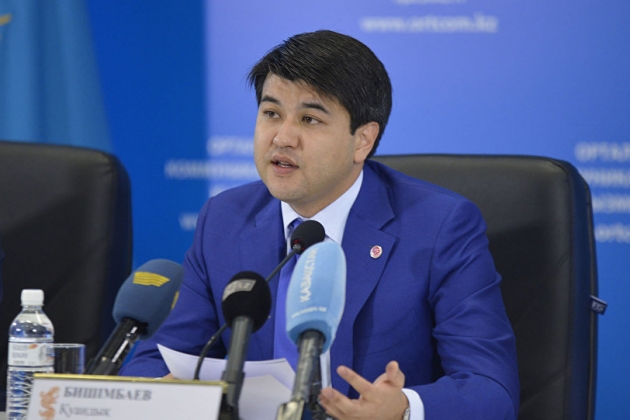 Bishimbayev said partial privatisation of the companies is planned and the companies will be presented using an initial public offering at the Astana International Financial Centre after it starts operations and possibly at other international exchanges.

He said the source of the growth of Kazakhstan’s economy is in the restoration of the domestic financial sector. The minister highlighted that the restoration in the near future can double the economy’s growth above current projections, Kapital.kz reported.

Bishimbayev added that today 40 percent of all investments in the country are made from the state budget: local, national and quasi-public companies.

“Our stock market isn’t developed well. Besides, there was a recess in the banking system. Lending is not growing, and in real terms, perhaps, is even falling. These things are obvious. The restoration of the financial market, if we can do it, will dramatically help our economy. The National Bank, which provides quite a consistent policy in this direction, is the leader in this field. All other sources, which we will be used, such as entrepreneurial potential, involvement of self-employed people in production activities, implementation of infrastructure projects, will certainly give effect, but only after two or three years. Yes, we are now taking actions, but the results will be seen only in a few years,” he said.

Bishimbayev also said that the biggest problem in the Kazakh economy is that a lot of people are relying on the budget of the National Fund to get money for further development.

According to geologists, most of the territory of Kazakhstan is undiscovered and, therefore, the land and subsoil is difficult to use as part of economic operations. The minister explained that two major documents, a new Natural Resources Code and Tax Code are developed and will significantly affect the country’s economy. The first document will contribute to the removal of barriers to the arrival of foreign investors-subsoil users and the second fundamental code sets the task of changing the focus of taxation.

Bishimbayev is a strong supporter of the changes in the new documents, saying, “Today we have taxation which is based on tax-related income. That is, when you extract resources, you pay taxes, respectively, your ultimate profitability as an investor or a subsoil user will be excluded. For example, such investor can get negative earnings as a result of his activities under current taxation system. The current system creates additional risks for investors. In many countries, for example, in such a developed state as Norway, which is considered a good example for other states, the taxation system is restructured.”