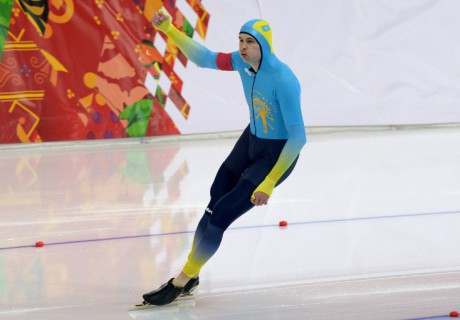 Krech covered 500 metres in 35.07 seconds, 0.03 seconds ahead of the reigning world champion, Russia’s Pavel Kulizhinikov, who is a World Cup winner and a world record holder at this distance. Dutchman Kai Verbij came third (+0.12).

“[Running a] sprint is a delicate matter, and running in early pairs can be even more beneficial than in the subsequent ones. A high result achieved at the beginning, challenges your rivals’ psychological balance. Those who cope with the nerves run [as they normally can] but the ones who do not, burn out and make mistakes. So I try not to pay attention to the seconds shown by my rivals. Yet on the third day, with a crazy desire to improve the previous day’s success, I was a bit short of what I truly desired,” Krech said.

The last time a Kazakh skater won gold at the World Cup was 21 years ago in Davos, Switzerland when Vadim Shakshakbayev took the top spot. He covered the distance in 0:36.45 seconds.

Astana will host Dec. 2-4 one of the next stages of the ISU Speed ​​Skating World Cup. In these stages, athletes compete for spots in the 2017 ISU World Single Distances Speed Skating Championships.

The World Cup is contested on each track separately for a pool of points that the athlete gains in six stages. Depending on positions in each of the final protocols, points for the World Cup stages are compiled.

The second stage was Nov. 18-20 in Nagano, Japan, which hosted the 1998 Winter Olympics. The third stage will be in Astana. Additional stages will be in the Netherlands and Germany while Russia will host the final. In seeking the World Cup, racers compete in individual distances and the all-around.