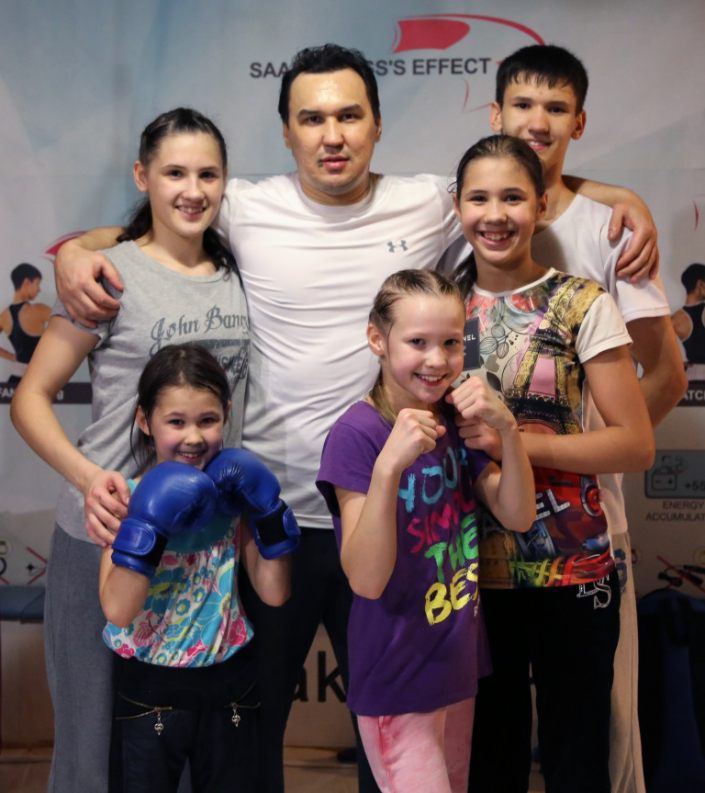 Under the supervision of her father and trainer, Rustam Saadvakass, the young star has been training in Russia alongside her six siblings.

“Boxing is a fantastic option for children to improve mental and emotional health and develop physical skills,” said Saadvakass, according to tengrinews.kz.

“Of course, boxing as a martial art provides extra protection for my children. I have five daughters and I have nothing to worry about. For decades, I tried to adapt the exercises of this rough sport for my children excluding any injuries and risks. At that time, I didn’t know what would come in the way of my study; I just felt all the hidden potential in this sport. But now, when I have gone through the most difficult path creating a training system, I certainly believe that soon many parents will be willing to involve their children in the sport and develop such outstanding skills as Evnika shows,” he added.

Saadvakass is often asked about the style he uses to train his children, as people realise the boxing family is practicing a new method in the combat sport. Evnika has fantastic speed and her reaction and concentration are very high.

“Perhaps in this case it is not about style, but about the new concept of martial arts. We still need some time [to reveal Evnika’s further skills]. I don’t want to rush; a lot of work is ahead of us,” he said.

He is proud of his talented and charismatic daughter.

“She has an ability to inspire people. Her persistence and incredible abilities motivated more than a million people around the world to involve their children in sports. Sports clubs, different organisations and studios from all over the world are inviting us for a visit and this is in addition to commercial invitations,” he said.

Evnika will decide independently whether she wants to become a professional boxer, he added.

“A boxer, as any other athlete, can gain numerous victories but fail to become a great fighter if he or she treats the work as a craft. For true success, boxing should become a vocation, a matter of life causing passion and desire to improve skills. For this reason, I don’t raise hopes too much. I’m waiting for Evnika’s decision. Nothing stimulates better for the victories than one’s own desire to win,” said Saadvakass.

He and his wife, Ania, want their kids to be hard-working, diligent, friendly and responsible people and now the whole family is striving to achieve a common goal.

In November 2015, French director Olias Barco invited Evnika to Ukraine to play in “Polina,” a family adventure film verging on fantasy. Evnika portrays herself, a girl-boxer. She was lucky to work with famous cinematography figures in Kiev. The official release of film is scheduled for 2016.