By Malika Orazgaliyeva in International on 11 November 2016 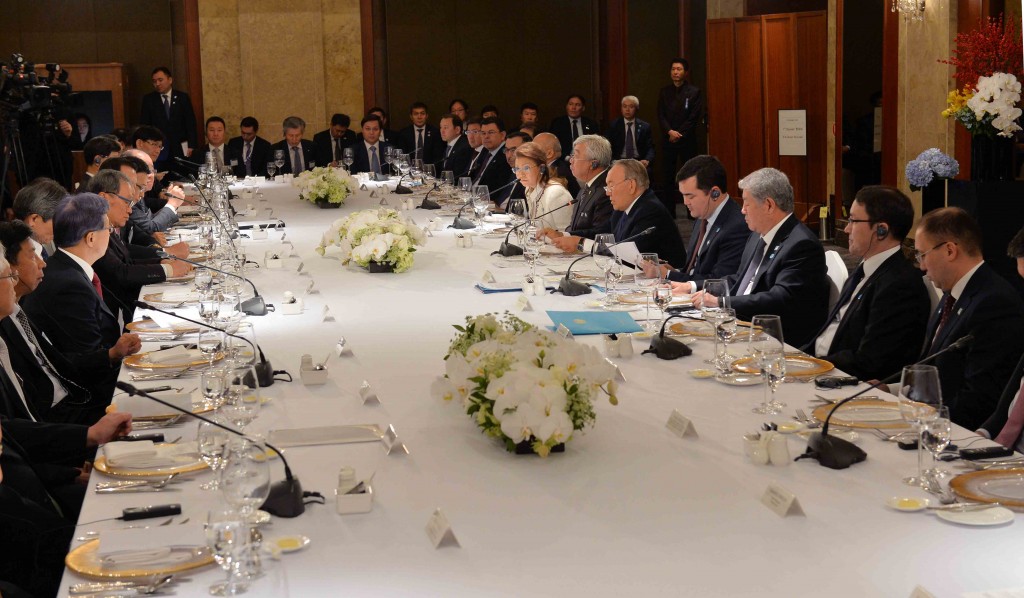 The two agreed to work to expand mutual trade turnover and bilateral relations.

Park expressed hope that the anti-nuclear weapons initiatives of Nazarbayev will receive intensive promotion as part of Kazakhstan’s non-permanent membership on the UN Security Council in 2017-2018.

The Korean side noted big interest in cooperating in transit and transport. In this connection, Nazarbayev reminded that construction of Kazakhstan’s terminal at the port of Lianyungang on the Pacific coast of China has been  completed.

“The terminal already transported about one million containers,” he said. “Also, a railway connecting Khorgos Dry Port with the sea port of Aktau on the Caspian Sea, as well as a railway through Turkmenistan and Iran to the Persian Gulf, were built. All of these directions could be used by Korean businesses,” Nazarbayev added.

Park said she was pleased to meet Nazarbayev on the eve of the celebration of 25 years since the establishment of diplomatic relations between Korea and Kazakhstan. Kazakh-Korean relations are developing rapidly, she noted.

As part of his visit, Nazarbayev met with representatives of major Korean companies. He noted that Korea is one of the key partners of Kazakhstan in East Asia, mentioning that since Kazakhstan’s independence Korea invested about nine billion dollars.

According to Nazarbayev, areas of cooperation such as energy, agriculture, engineering, construction, finance, investment, transport and logistics system are promising.

There are 465 joint ventures with South Korean capital in Kazakhstan, Nazarbayev underlined. In the last three years, 14 investment projects worth over $160 million had been implemented.

“We consistently improve our investment climate and business environment. The state programme on industrial and innovative development is being implemented. Investors of priority sectors receive tax breaks, special measures of support for small and medium-sized businesses,” Nazarbayev said.

He reminded that a visa-free regime and direct flights are available for citizens of the two countries. In addition, Nazarbayev invited Korean companies to participate in EXPO 2017 in Astana.

“We are ready to cooperate with Korean companies in all economy sectors. I hope today’s meeting marks the opportunities and prospects of mutually beneficial cooperation between business circles of our countries,” Nazarbayev concluded.

Following the talks, Nazarbayev participated in a ceremony of laying flowers at the War Memorial of Korea and left a note in the Honorary Guests Book. He also visited Yonsei University where he received an honorary doctorship.