By Malika Orazgaliyeva in People on 4 November 2016

ASTANA – Timur Lesbekov, head of Cardiac Surgery Department No.1 of the National Research Cardiac Surgery Centre (NRCSC) and one of Kazakhstan’s many young medical leaders, discussed his professional growth and drive for success in a recent interview with Kazakhstanskaya Pravda. 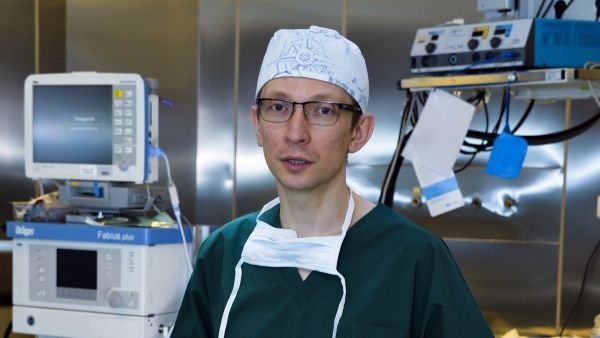 The average age of the staff at the NRCSC is 35. However, in a rapidly developing field like cardio surgery, “young” does not mean “green.” The NRCSC physicians have practiced their specialities at leading world clinics, work hand-in-hand with well-known colleagues and are actively learning and applying modern technologies. Five years ago, Kazakhstan had never performed a heart transplant; now about 40 such surgeries have been conducted and the implantation of artificial hearts has become routine.

“The fact that we are working in this atmosphere is a great success,” Lesbekov said. And working in Kazakhstan has allowed him to advance professionally as fast as he can master new skills, with no barriers. In the U.S., he points out, he wouldn’t be allowed to do the surgeries he’s doing now until he was at least 48, because the process of advancement is much slower.

“My professional growth comes at a time when a large volume of complex surgeries are carried out because cardio surgery is still in its initial stages. Our advantage is also the fact that the government financially supports our service: the clinic holds from 1,500 to 1,700 surgical procedures per year,” Lesbekov said.

Lesbekov followed his parents into medicine: his father is also a cardiologist. Lesbekov graduated from St. Petersburg State Medical University and worked at the Clinic for Cardiovascular Surgery of the St. Petersburg Medical Academy of Postgraduate Studies.

After graduate school, Lesbekov returned to Kazakhstan to be closer to his parents. He got in contact with Kazakhstan’s famous surgeon, Yuri Pya, who was working at that time at the National Scientific Medical Centre. Later, he met with NRCSC Director Abai Baigenzhin. The National Research Medical Centre was just beginning to draw specialists in its mission to vault Kazakh medicine forward, and the first cardiac surgeries were beginning to be done there. Lesbekov had found his professional home. Now, five years have passed since the opening of NRCSC and Lesbekov himself performs 300 surgeries per year – as many as his first clinic in St. Petersburg carries out per year.

“There are two or three surgeries per day in the department, and sometimes there could be four per season; when, for example, after the autumn harvesting campaign and other important affairs, people finally remember to deal with their health,” the doctor noted.

ECMO connects patients to a machine that helps the heart pump and functions as artificial lungs, the doctor explains. Using the technology, the department has brought mortality down to 1.5 to 1.6 percent per year, close to European statistics, he said. The NRCSC doctors who use it have undergone training in the U.S., France and the U.K.

The technology has saved dozens of lives, Lesbekov said, including pregnant women and other patients brought by air to the centre. Now, Lesbekov and his team aim to distribute ECMO across regions and to develop it to such an extent that the technique could become a routine procedure. A large programme has been created to coordinate this development.

The second technology actively used in the department is trans-catheter valve implantation, which allows some heart treatments to be conducted without stopping the heart or opening the chest. The heart is reached instead through the large femoral blood vessels.

Lesbekov is also actively involved in the heart transplant programme, including complex operations that can last more than 24 hours and involve shift changes and many personnel. Such complex operations are now routine and the staff have perfected all stages of the process.

The number of medical centres and personnel who call these life-saving procedures routine is growing across the country. According to the doctor, the regions today conduct successful concurrent, multivalve surgeries. The Regional Cardiac Surgery Centre in Pavlodar alone performs more than 1,000 operations per year and the Ust-Kamenogorsk Regional Hospital performs about 200 procedures on the heart.

With so many surgeries under his belt, Lesbekov now leaves the operating room calmer, he says. “Recently I flew to Karaganda to save a woman – her aorta was torn two weeks after childbirth. That is a case I will remember. Also, there was a girl with congenital heart disorder, who was not allowed any operations, but she was operated nevertheless. She was not allowed to become pregnant, but she became pregnant, she was not allowed to give birth, but she gave birth.” He cites surgeon and writer Yuri Volokh, who said ‘for a surgeon bread is not tasty, because every dead patient takes a piece of his heart away, but every saved patient recovers it.’”

The team of NRCSC is expanding its young, qualified staff.In 2017, Astana will host the Congress of the World Society of Cardiovascular and Thoracic Surgeons, which the centre calls evidence of the success of the NRCSC and cardiac surgery in Kazakhstan as a whole.