ASTANA – Kazkommertsbank, one of the largest banks in Kazakhstan and Central Asia, presented its updated retail brand QAZKOM Oct. 21 to mark its 25th anniversary. 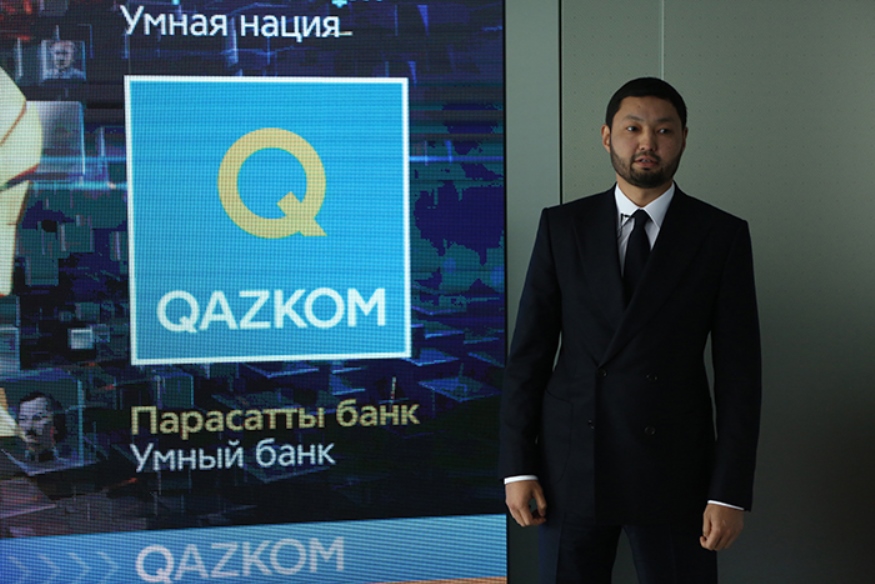 Kenes Rakishev at the presentation of qazkom. Photo credit: Alma-Ata.city

“The essence of the changes is not in the changed logo and new writing of the brand name, but rather in qualitative changes happening in the bank as part of a new development strategy. We are targeting large-scale reform of customer service to focus on client needs. The letter Q in the new logo symbolises our willingness to step up to a new level in innovations to provide our customers with greater mobility, speed and ease of banking services,” said the bank’s chairman of the board and major shareholder Kenes Rakishev, according to the press release.

Former spellings of the bank, which were Kazkom in Russian, Kazakh and English, will now be replaced with the single QAZKOM. The new name based on the Latin alphabet is the most optimal for the display of all the phonetics of the Kazakh language, including specific sounds, according to the release.

The bank has also upgraded its logo by changing the previous yellow circle, which symbolised the sun, to Q, the first letter of the new name, while the blue square remained the same.

The launch of the new brand was preceded by a large advertising campaign called Smart Nation, based on the modern and historical figures that made a significant impact on the development of Kazakh science, society and culture.

“We have decided to present the re-branding of the bank through the history of a smart nation, represented by its brightest personalities, innovators and pioneers from different eras. We also realised that QAZKOM – as we know it – could not be as such without the intellectual contributions of its employees and demanding clients and without the support of the Kazakh nation, which unifies more than a hundred ethnic groups living in our country,” said the bank’s first deputy CEO Abai Iskandirov.

In addition to the new brand, Kazkommertsbank has introduced a new branch format, a key feature of which is the expanded self-service zone. Such format will be one of the technological and service standards of the new QAZKOM brand. The first office with the updated brand was opened in Almaty the same day as the presentation.

The bank noted it will be replacing all existing offices with new ones, which in addition to the traditional banking kiosks and ATMs will have video banking cabins and automatic cashier desks. A new format branch was opened in Astana Oct. 26.