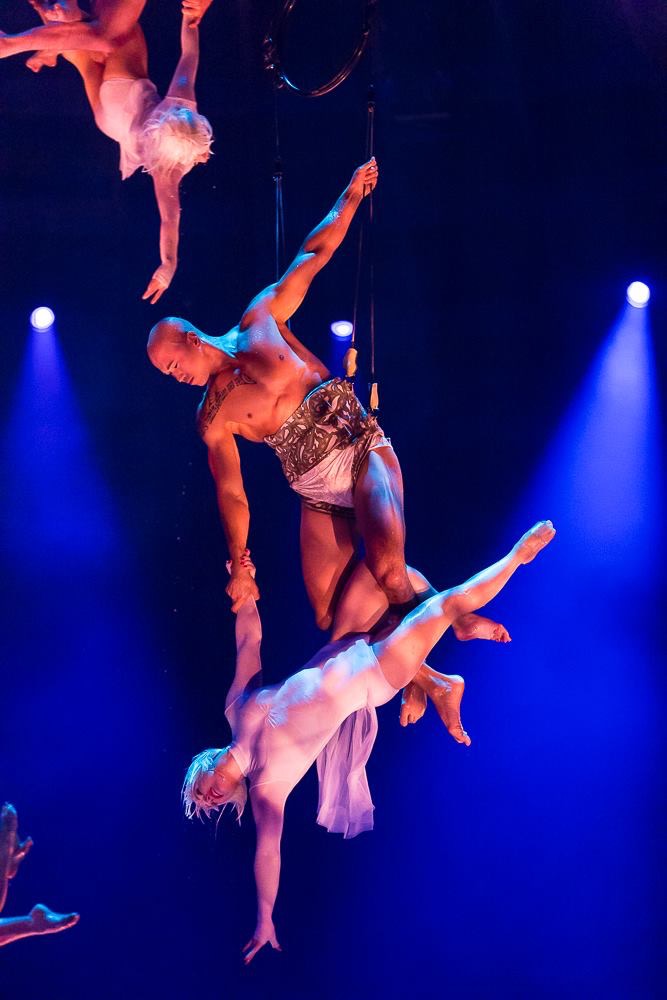 Enchanting, mesmerising, exciting, fantastic, mysterious are some of the most common reactions to Le Rêve. The production is a combination of acting, dancing, acrobatics, stunts and motion graphics put together to narrate a touching love story. The show was inspired by and bears the name of Pablo Picasso’s 1932 masterpiece, which was once owned by billionaire Steve Wynn, proprietor of the Wynn Hotel Casino where it is staged. Director Franco Dragone previously guided many of the critically acclaimed Cirque du Soleil productions.

Le Rêve challenges common perceptions of human physical capabilities, agility and strength. The show features 90 performers from a dozen countries and 250 cast and crew members. The act takes place in an aquatic stage with an excess of 3.7-million-liter water capacity. As the name suggests, the show is a journey into a woman’s dream where an entirely new world unfolds in an array of areal stunts, high dives and underwater acts.

Mouzdybaev joined the production more than a year ago and has since played one of the leading characters – the main antihero of the story. Besides the professional challenges the part entails, Mouzdybaev had to move from New York to Las Vegas, shave his head and learn to use make-up. Between gruelling rehearsals and two shows per day, the actor took some time from his busy schedule to sit down with The Astana Times for an exclusive interview. 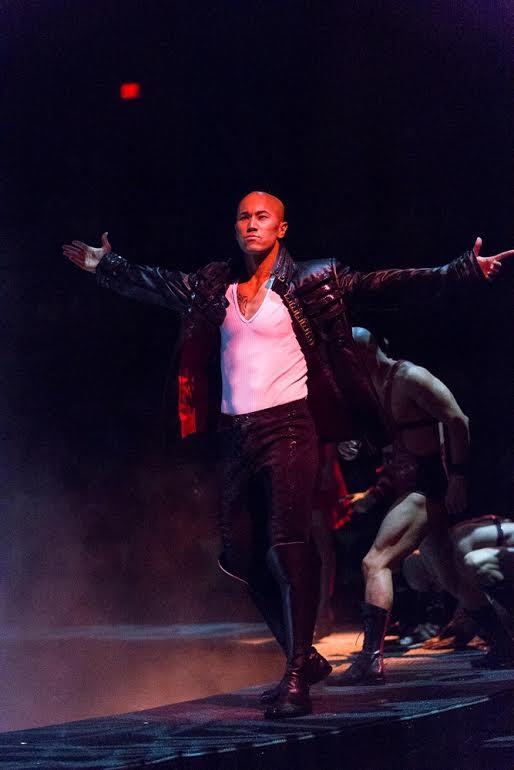 Tell us where it all started. How did you first get involved in performing arts and gymnastics?

I was actually born in the circus. I am a second-generation performer. In 1980, my father decided to join the circus. He was born near Taldykorgan. He and his buddy decided to join the circus. They went to Moscow. They graduated from the Circus College there. My mom was a singer from Semipalatinsk. Once she went to Moscow to compete in a singing contest, so that’s how they met. I was born while they were performing, so I grew up watching them perform for 15 years. I first stepped on stage back in Kazakhstan when I was six. I did some little acts, clown or magic acts for the Kazakh traveling circus. That’s when the fire started and now I’m keeping that fire going.

When and why did you move to the United States?

In 1990, my parents were performing in Almaty. Ringling Bros. and Barnum & Bailey Circus was looking for new acts for their show. They came to Almaty and watched a couple of performances of Almaty Circus. They picked a few performances. One of them was my father’s acrobatic act. He got invited to perform in the States, so he moved here and eight months later we joined him in the show. Back then, I was a generalist. As a kid, I wore big masks and did dance and improvisational acts. We were on the road for four years, touring America and living in the train. After that, we decided to stay. I felt like I had more opportunities as a performer here. I went to middle school, high school and college in New Jersey. It was really tough getting into American schools, but I got used to it. The gymnastics part was always with me since the circus. I started coaching gymnastics when I was in high school and continued coaching all through college. That’s when I realised I really loved what I was doing, I loved what I was teaching; I loved to give back and share my talents. From then on, I started training harder. In 1999, I was introduced to breakdancing. Breakdancing and gymnastics made me want to learn more skills, become a performer and go into acting and modelling. Then I signed up with an agency in New York. They started sending me on different calls and auditions and opened the doors to a different world that I was actually able to join and make some noise there.

How did you join Le Rêve?

I was in New York auditioning, doing gigs, coaching, doing film work and modelling, then I auditioned for a touring stunt show called Marvel Universe Live. I played the character Rhino from “Spiderman.” I was the first person to play Rhino in a live stage show. We were touring the country for a year and a half. One day, my agency told me there was an audition in Los Angeles for Le Rêve. Fortunately, we were in San Diego, so two of my fellow performers and I got into a car, drove north early in the morning and went into an audition with about 100 other performers. We were the last couple of people to pass the audition. I got invited to a three-day workshop a month later – a really tough one. I’ve done a lot of things, but going through their workshop was a totally new level. It was a crazy learning experience including stunts in the water, a swimming test, acrobatics, lifting and improvisational acting with scenes requiring me to cry, laugh and express hate and love. A month later, I got a call to join the show. It was a great phone call that I received. 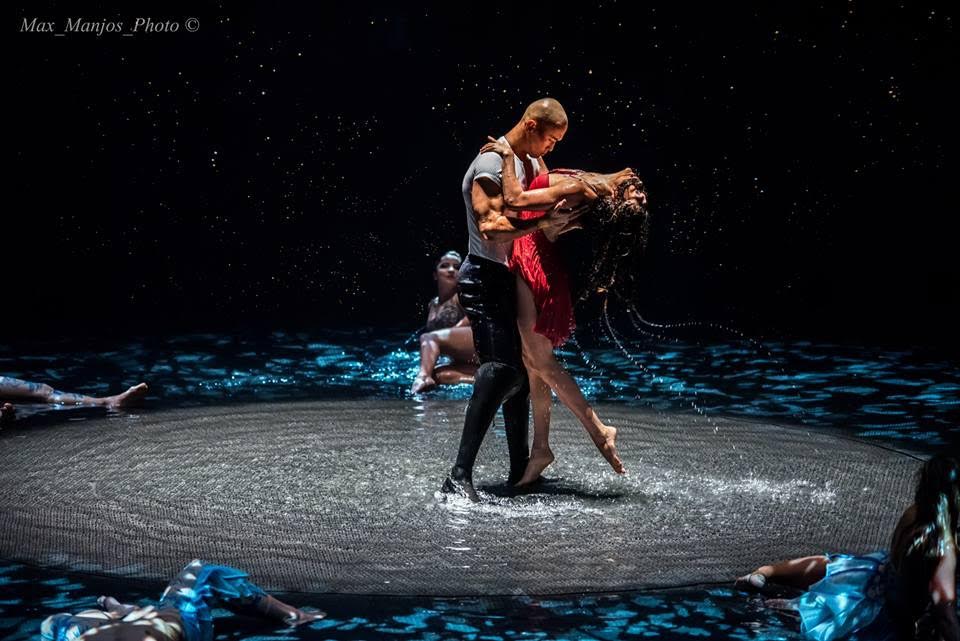 What part do you play in the show?

I play the character named Dark Prince, the antagonist of the True Love character. The Dark Prince is a bad guy. He tries to tempt the main female character, who in her dream hesitates if she really wants to be with the guy who has just proposed to her or if she still wants to explore the world, since she is too young and there is so much temptation out in the world.

What do you like the most about being part of Le Rêve?

The best part of my work is touching the hearts of those who come to watch us, giving them the emotions and impressions they can remember and take back home to their families. I know there are a lot of people who come back to see the show again, who have seen the show four or five times. Every show for me is a new show. I get excited when I see the audiences’ reactions, their excitement. It’s like a recharge; I forget the pain and aches in my body and it feels amazing. That’s what I love about Le Rêve. Also, the guys I work with are incredible. Some of them have been with the show since the very beginning. They are true professionals. They inspire me with what they do, reminding me that I need to step up my game.

How is life in Las Vegas?

The first time I came to Vegas, I looked around and it reminded of my hometown Almaty. In Almaty, you can see mountains surrounding the city, so Vegas reminded me of back home. Vegas is less stressful. I used to live in New York and compared to New York this is so different; everything is pretty close. I go outside, I cross the street and there you have ten restaurants, 20 stores and tons of variety for locals and visitors.