TOKYO – President of Kazakhstan Nursultan Nazarbayev began an official visit to Japan Nov. 7 seeking to boost the already strong political and economic relations. During the meeting with Emperor of Japan Akihito, the sides discussed bilateral relations. 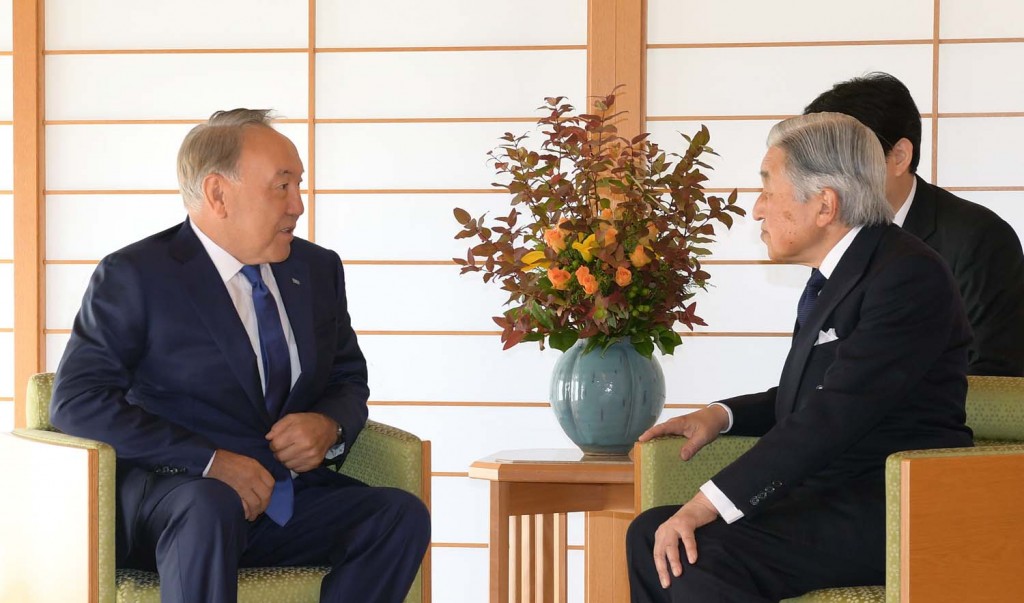 Nazarbayev underlined close cooperation between the two countries in various fields, highlighted regular participation of the Japanese side in the Congress of Leaders of World and Traditional Religions held in Astana, as well as noted the close partnership in the field of international security, including the issues of nuclear disarmament and non-proliferation.

Nazarbayev underlined Japan’s tremendous contribution in resolving global conflicts and facilitating sustainable regional development. He stressed that Kazakhstan will take measures aimed at building a nuclear weapons-free world and solving the issues of energy, food and water security in the framework of its non-permanent membership on the UN Security Council 2017-2018. 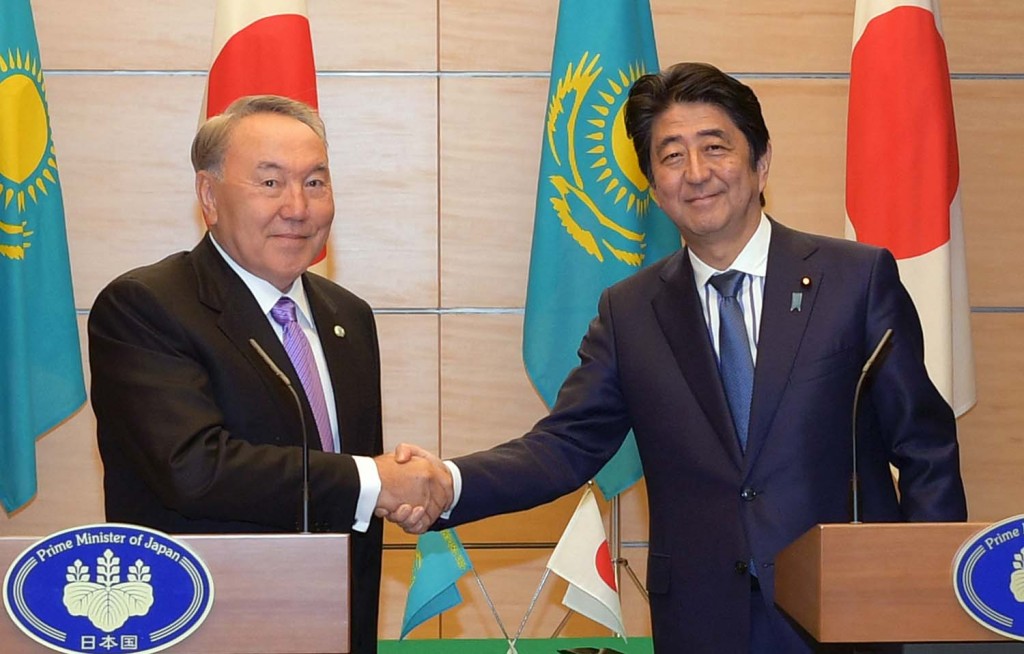 Nazarbayev noted that Japan was one of the first countries in the world to support Kazakhstan’s independence 25 years ago. Development of friendly partnership relations with Japan was on top of Kazakhstan’s agenda.

“We agreed to continue active political dialogue, increase contacts at all levels, ensure security of the region, facilitate trade, economic, cultural and humanitarian cooperation, as well as collectively work against challenges of the modern world,” Nazarbayev said at the meeting of the two delegations.

“Kazakhstan is the largest trade and economic partner of Japan in Central Asia. The volume of mutual trade turnover in 2015 amounted to $1.5 billion. We have a potential to increase this figure and we will steadily expand the horizons of cooperation in the field of high technologies, agriculture, nuclear power, automotive and the steel industry,” Nazarbayev added.

In turn, Abe emphasised that the two countries are closely working as co-chairmen of the Conference on Facilitating the Entry into Force of the Comprehensive Nuclear Test Ban Treaty (CTBT).

“I have an intention to continue to actively develop relations between Japan and Kazakhstan hand in hand with President Nazarbayev,” Abe said.

During the talks, the parties signed documents, including the joint statement “On special strategic partnership between Kazakhstan and Japan in the age of Asia’s prosperity,” memorandum of understanding between the Kazakh Ministry of Investment and Development and the Japanese Ministry of Land, Infrastructure, Transport and Tourism. In addition, an agreement on Japan’s participation in EXPO 2017 and a memorandum of cooperation between Astana International Financial Centre and the Japan Securities Dealers Association were signed.

During the meeting of Nazarbayev and Foreign Minister of Japan Fumio Kishida, they discussed bilateral cooperation and international issues. 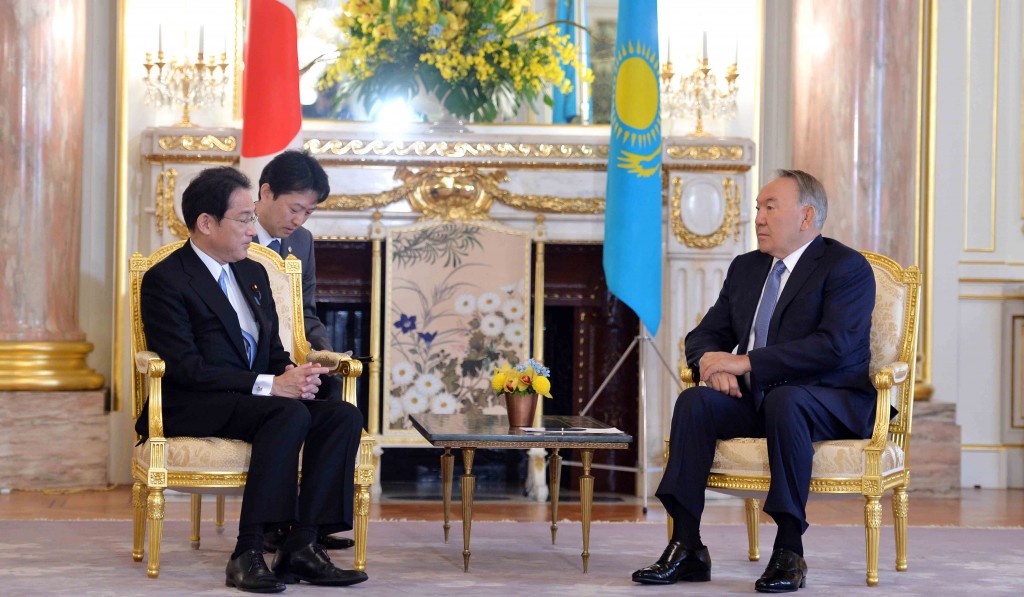 Nazarbayev noted that ties between Kazakhstan and Japan have grown to a high level of partnership.

“Japan and Kazakhstan are leaders in the anti-nuclear movement. I am confident that we will jointly keep our work on this issue. My upcoming visit to Hiroshima is aimed at showing solidarity with the Japanese people. We are working together on building the world without nuclear weapons in the 21st century,” Nazarbayev said.

“We feel sincere respect for your leadership since Kazakhstan has gained independence. The fact that Kazakhstan was elected as a non-permanent member of the UN Security Council for 2017-2018 indicates your successful leadership,” Kishida noted as reported by the Akorda press service.

Later on, the Kazakh delegation headed by the President attended a meeting with members of the Kazakhstan-Japan Friendship Parliamentary League headed by Chairman Takeo Kawamura. 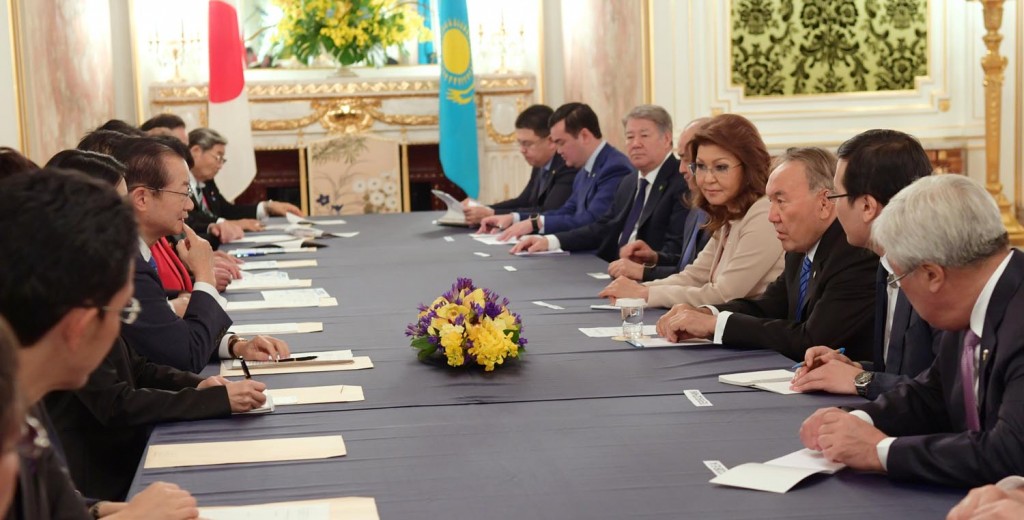 Nazarbayev noted that the Parliamentary League is making crucial contributions to strengthening the strategic partnership between the two nations.

He expressed gratitude for the support given to Kazakhstan and the efforts being made to enhance cooperation, including the issues of nuclear disarmament.

“Next year, we will celebrate 25 years since the establishment of diplomatic relations between Japan and Kazakhstan. In addition, the exhibition EXPO 2017 will take place in Astana. We would like to use these events to strengthen inter-parliamentary exchanges,” Kawamura said while thanking Nazarbayev for the fruitful meeting.

During the trip, the Kazakh delegation got acquainted with the Tokyo Rope enterprise and took part in the ceremony of remote launch via teleconference for Tokyo Rope Almaty plant for manufacturing steel products in Kazakhstan. The plant, located in Kazakhstan’s largest city, will produce a variety of metal products, including heavy-duty grids for further production of gabion systems used for the prevention and elimination of emergencies. The projected capacity in the first phase will amount to five thousand tonnes of metal products per year. It is expected that the company’s output will not only be utilised in Kazakhstan, but also supplied to the Commonwealth of Independent States and markets further afield.

“Today, Astana has become one of the largest research and education centres in Eurasia. We are attracting young people to study at our university and hope that the Japanese youth will also join it,” Nazarbayev said.

Following the event, Nazarbayev was given the Degree of Honorary Doctor of Engineering Science at Tokai University. The institution’s President Yamada Kiyoshi emphasised that Nazarbayev has been awarded the diploma and medal of Doctor for his contribution to Kazakhstan’s modernisation during the period of its independence, as well as development of scientific and educational services in accordance with international standards.

Addressing the Parliament of Japan on Nov. 8, Nazarbayev pointed to measures taken by Kazakhstan to strengthen international security and stressed the importance of joint efforts to build a world free of the nuclear threat.

“We see an important task in the establishment of a global anti-nuclear movement. That is exactly the goal promoted by The ATOM Project that was proposed by our country. I invite our Japanese friends to support this initiative,” he said.

Nazarbayev stressed that currently the risk of use of nuclear weapons globally is higher than ever since the end of the Cold War.

On Nov. 9, the Kazakh leader will visit Hiroshima, where he will pay respects to the victims of the city’s atomic bombing by the United States in August 1945.

Malika Orazgaliyeva contributed to this report from Astana.