Fire-Fighting Motorcycles to Be Used in Almaty

By Kamila Zhumabayeva in Nation on 10 November 2016

ASTANA – A rapid response motorcycle crew project will be adopted in Almaty so that the city’s fire-fighting units can arrive to an emergency site faster. Four Jawa 660 fire fighting and rescue bikes were made upon special order of Almaty’s emergencies department. 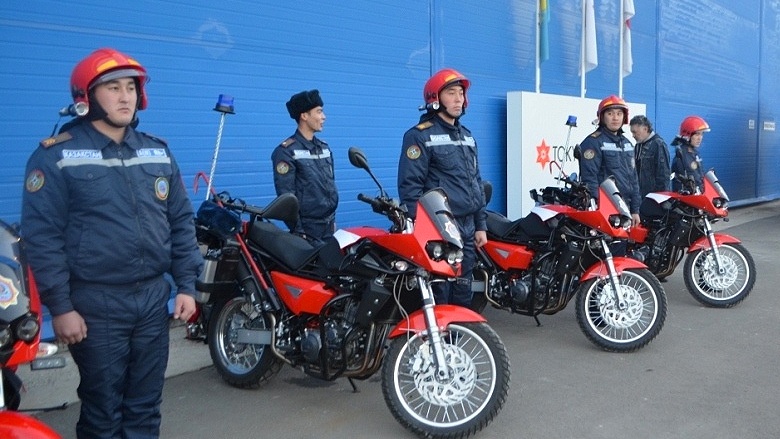 “Their goal is rapid arriving to an emergency scene (including road accidents), containing fire outbreaks before Almaty’s emergency department arrives,” according to the Emergencies Department of Almaty, Tengrinews.kz reported. “As of today, 18 fire fighting specialists were trained for extreme driving and received certificates. Almaty’s rescue workers plan to evaluate the efficiency of adopting fire fighting bikes upon developing their practical use on duty.”

Bikes are equipped with a manual pulse fire-attack system, high-speed fire extinguishing agent delivery, liquid fire extinguisher, first aid kit and other tools. Fire fighters can remove the victim out of the accident spot with the help of a special device for unclamping and cutting metal.

Jawa 660 bikes are fitted with single cylinder engines and electronic fuel injection. The engine issues 48 horsepower that enables the bike accelerate to 170 kilometres per hour with its weight of 198 kilogrammes, according to Motor.kz magazine.

Thirteen minutes is an average time of rapid response during a fire, in other instances fire-fighting crews arrive in 20 minutes, according to emergency officials. Traffic standstills in the city create certain difficulties for timely arrival of fire fighting crews to an emergency site. However, bike riders will now be able to arrive faster, to help the affected or try to contain fire outbreaks on their own.

Fire fighting bikes are being successfully deployed in fire units of Russia, United Arab Emirates, China, Greece, Germany and Turkey. They will be used for the first time in Kazakhstan.

The emergency department states that money to purchase four fire-fighting bikes was allotted from city funds. The basic version of the bike is valued at 1.5 million tenge in Russia (about US$4,389), the magazine reports.

At the moment, Almaty has 15 firehouses. Their working radius is 3 kilometres.