FC Astana Ties 1:1 at Home with Olympiacos in Europa League

By Anuar Abdrakhmanov in Sports on 7 November 2016

ASTANA – Ahead of a Nov. 3 match, FC Astana faced a number of challenges with its line-up. Injured were such players from the main squad as Askhat Tagybergen, Agim Ibraimi, Marin Anicic and Tanat Nusserbayev. The Colombian midfielder Roger Cañas was suspended as he was sent off in the previous Europa League game in Piraeus. The Greek team also had its problems but still fielded a quality line-up, which included Argentinian Esteban Cambiasso, well known to fans worldwide from his stint in FC Internazionale Milano. 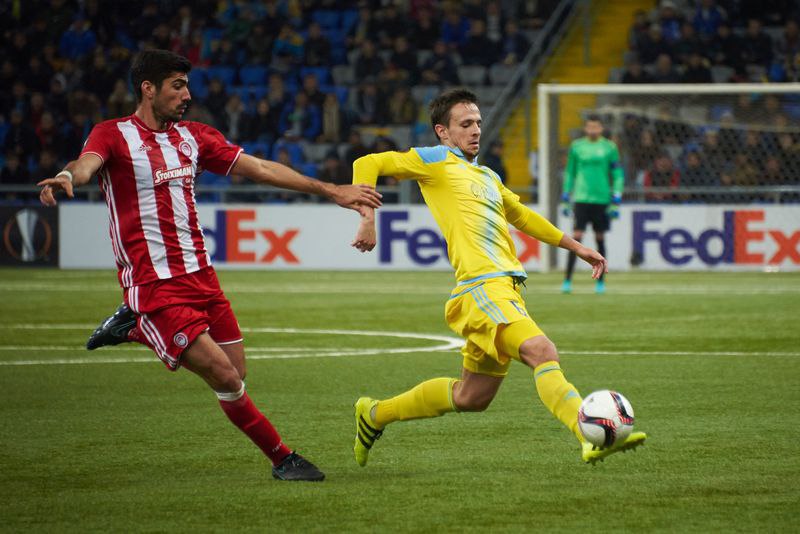 The match began with Astana’s active attacks. Very soon those attacks bore fruit. Patrick Twumasi successfully broke through on the flank, entered the penalty area and crossed on to Djordje Despotović who sent the ball into an empty net and thus brought the Kazakh team an early lead – 1:0. Within a few minutes, FC Astana had another good opportunity to score but this time Dmitri Shomko’s cross from the wing ended with nothing as Junior Kabananga and Serikzhan Muzhikov failed to reach the ball as it crossed the penalty box.

The Greek team had to go forward so the game turned pacier and more entertaining. Finally, one of the guests’ attacks resulted in an accurate header from Sebá right into the opponents’ net, making the score 1:1. Up till the break, Olympiacos continued to pressure but the hosts managed to improve in defence.

Early in the second half, Twumasi was active again. Twice he made good crosses forward but in both moments his teammates could not use their chances. Moments later, Twumasi fouled on Cambiasso and was shown a yellow card. He would thus miss FC Astana’s next match in the League, at home with APOEL Nov. 24, which in many respects would be decisive for the team’s chances to progress into the playoffs round in spring.

In final minutes of the match, Olympiacos virtually locked the hosts in their penalty area. In the most dangerous moment only the bar saved FC Astana from a loss after André Martins’ strike. The Kazakh team should have felt lucky preserving the 1:1 result in the end.

“Tonight was an interesting game, a real football battle. Both teams wanted to win. We had good moments in the first half and we could have scored in the second. In the ending part, the opponent was stronger. Both a win and a loss were probabilities for us [but it finished with a draw],” said FC Astana’s Manager Stanimir Stoilov.

“I think we deserved to win. When the opponents scored first and took the lead, we pulled together, levelled and tried our best to win. Both teams earned a point tonight. But we wanted more and we had all the chances to secure a win. However, we must give credit to our opponents, they did not let us do that. Astana showed they are a strong team, which is difficult to beat on its pitch,” said Olympiacos’s Strategic Adviser Christian Karembeu, best known as a Real Madrid player in the past and a world champion with France from 1998.