By Kamila Zhumabayeva in Sports on 5 November 2016

ASTANA – Eight-year-old Aisha Zakirova has become the world chess champion in the under-8 category based on the results of the World Cadets Chess Championship that ended recently in Batumi, Georgia, reported the press service of the Aceademic Shakhmardan Yessenov Science and Education Foundation. 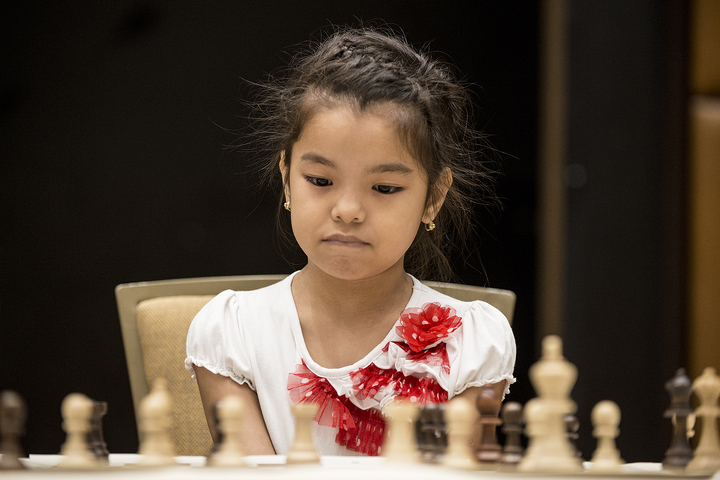 “We are happy. I was coaching Aisha for about a year. My father is her official coach now. We were starting from basics, learning to deliver checkmate [game position in chess],” said Kausar Bauyrzhan, according to Forbes Kazakhstan.

Aisha, who lives in Almaty, has been seriously involved in chess since she was six. She studies at the Almaty International Professional Chess School and was coached for the past few years by Shakei and Kausar Bauyrzhan.

“She was quite afraid of tournaments at that time, even cried sometimes. But we worked this through and today she goes to a battle with confidence and is a confident chess player now… We wanted and we knew she would become the world champion. This girl is very talented and we have many more goals ahead of us,” added Bauyrzhan.

More than 700 young chess players from 66 countries participated in the championship. Among other Kazakh participants, Meruert Kamalidenova ranked fifth in the girl’s under-12 category and Ansat Aldiyar placed in the boy’s under-8 category.

“Becoming the world champion is not just recognition of your own merits, your coaches and parents, of course, but is also a great honour and responsibility before our own nation,” said Kazakh Chess Federation President Galimzhan Yessenov, wrote Forbes.kz.

Aisha’s father, amateur chess player Tleubek Zakirov, said he also began learning to play at age six. His family lived in Ayagoz, a small town in Eastern Kazakhstan, and did not have access to a chess group.

“Aisha got luckier and working hard had a result after all,” he said.

She had her first serious tournament at the Asia Championship in South Korea, although at that time she did not have enough experience with competitions.

“Now a win in Batumi at the world championship straightaway. We do not make our daughter play chess and always tell that the choice is hers. If she wants to do something else, it is okay,” said her father.