ASTANA – Pulitzer-winning author Dr. Daniel Yergin presented the Kazakh edition of his book “The Quest: Energy, Security and the Remaking of the Modern World” Nov. 16 at Nazarbayev University.

“I am especially pleased to bring this important story to Kazakh readers because of energy’s central role in helping to build Kazakhstan’s 21st-century economy. I hope that ‘The Quest’ will provide a vital context and understanding for global forces that are so important to Kazakhstan’s future,” he said.

As the theme of the upcoming EXPO 2017 is the future of energy, Yergin added he hopes “The Quest” can contribute to the thinking and understanding of the topic.

“As I thought about that whole century in terms of the development of energy – where we are, where we are going to, where we are in the future, – it continues to be a great revolution, one driven by the technology and we really need to meet… Kazakhstan is the country very much caught up in that revolution of energy and that’s really why I am so pleased to have an opportunity to contribute this book to your thinking and indeed to your future,” he said.

“For our readers the book, of course, is priceless, as Kazakhstan has more than a 100-year history as one of the oil-producing countries and it is important to understand the principles of efficient use of resources,” said Astana International Financial Centre head Kairat Kelimbetov at the event. He wrote the preface for Yergin’s book, which has been especially revised for the Kazakh edition.

“The Quest” draws on five years of research to provide the most comprehensive analysis of the modern energy world and the dynamics shaping its future, states the press release distributed by the IHS Markit, where Yergin serves as vice chairman. It also offers “context and insight into what it takes to fuel life in the 21st century, the struggles among nations, the energies on which our society has been built and the new resources that are competing to replace them.”

“What I set out to do with ‘The Quest’ was to bring the global story together in one panorama in a way that has not been done before. The quest to secure the energy future will play out across the entire spectrum of energy – from traditional sources like oil and gas to renewable energy and improvements in efficiency – and, as history shows us, a healthy dose of human ingenuity,” said Yergin. 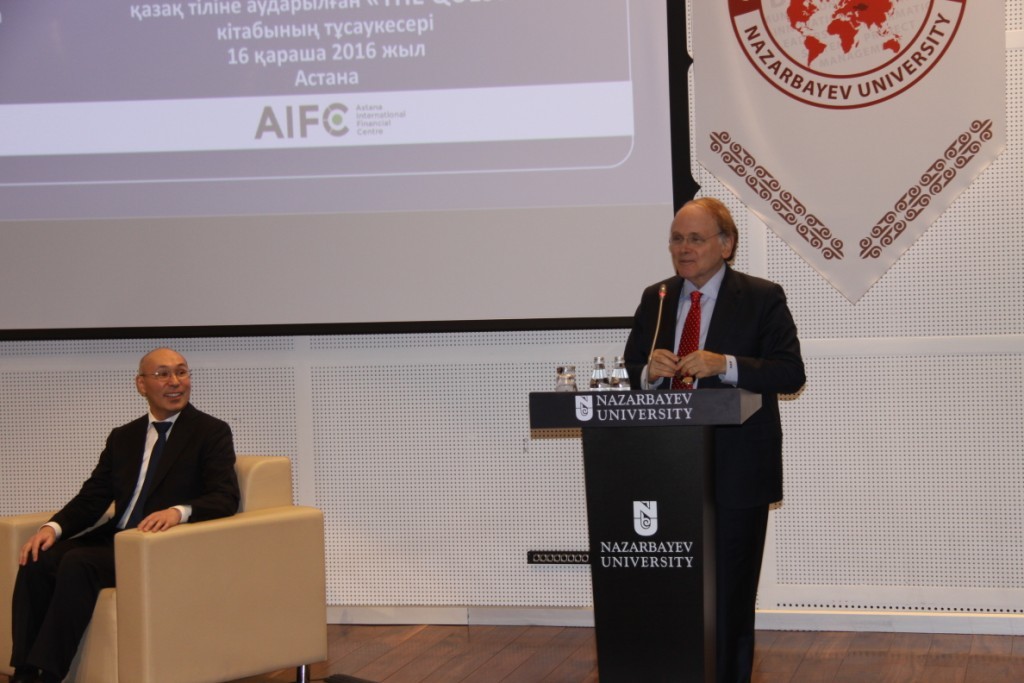 The author also describes how geopolitics, security concerns, technological innovation and economic forces have changed the oil landscape over the past two decades. He talks about the collapse of the Soviet Union, the Iraq War and Arab Spring, the rise of China, the oil price collapse and what he calls “the globalisation of energy demand.”

“The emergence of China is one of the fundamental elements of this story. Twenty years ago, China’s impact on global energy markets was marginal. Today its impact, from the energy demand generated by its energy-hungry economy to its emergence as a leader in solar energy and other technologies, has been one of the prime factors remaking the global energy landscape. Kazakhstan knows this very well, as it has become so connected both to China as well as western energy markets,” said Yergin.

“The Quest” also explores the growth of new sources of oil supply, such as offshore deep water, Brazil’s pre-salt resources, Canadian oil sands and Kazakhstan’s much expanded oil resources. Additional themes include North America’s shale gas and oil revolution and the development and increasing role of electricity. The book examines how another energy resource that often gets overlooked – energy efficiency – has the potential to have the biggest impact in the near term.

The book presentation coincided with the opening of the office of IHS Markit in the Kazakh capital.