Charity Bazaar to Bring Hope and Magic to Christmas Season

ASTANA – This year’s Christmas Charity Bazaar in Astana is hoped to be the largest-ever gathering to date, with 53 embassies involved and the snazziest prizes yet for raffle tickets. 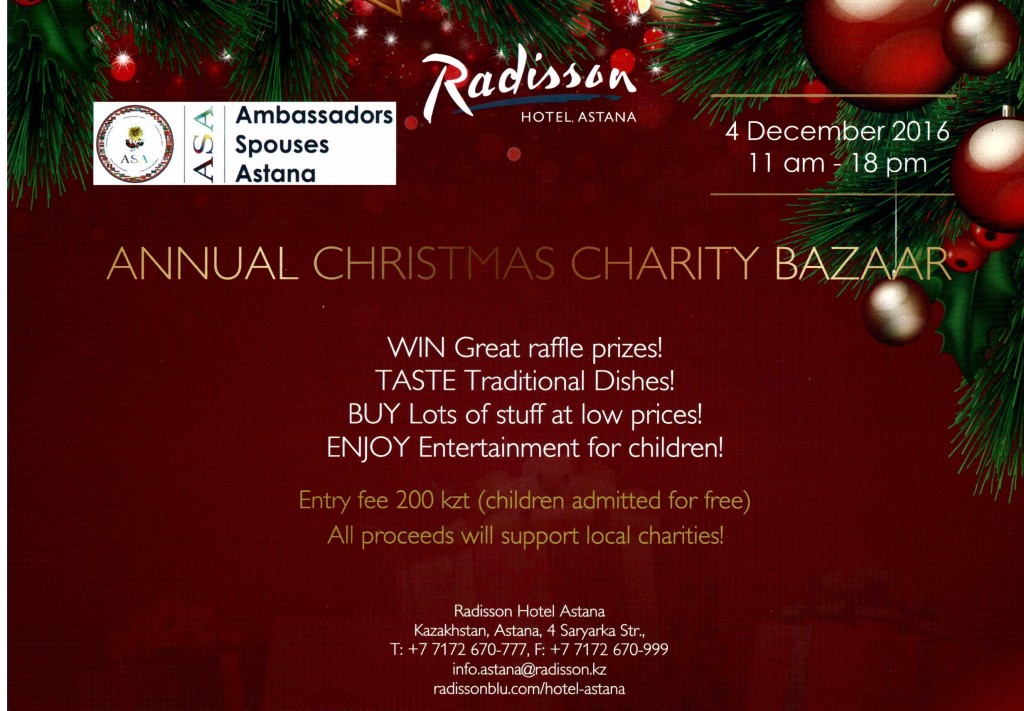 However, to the organisers of the Dec. 4 event at the Radisson Hotel, Ambassadors’ Spouses Astana (ASA), this is more than just a party – it is a way of making the world a little brighter on the eve of the Christmas season, both for the givers and for those who receive much-needed support from the event.

For Heba Osman, president of the ASA and wife of the Egyptian ambassador to Kazakhstan, this will be her third Christmas Charity Bazaar. Osman admits the organisational part can be exhausting, but the final result more than makes up for the fatigue.

“Nine years ago, the spouses of ambassadors initiated the idea of organising such an event to get involved in volunteer and charity projects and look for ways to help people in need,” she told The Astana Times.

Today, the Christmas Charity Bazaar is one of the most anticipated events of the year in Astana. This year, it is being organised by eight committees and 22 spouses of different foreign ambassadors.

This year, according to Osman, 53 embassies have signed up to take part in the charity event, offering their valuables as raffle prizes.

“During [the bazaar] we will have a Grand Raffle Lottery,” Osman said. “The embassies assisted us in getting, so far, 12 grand prizes, through providing airline tickets and travel packages to 12 different exciting destinations, such as Paris, Egypt, Estonia, Spain, Italy, Saudi Arabia, Dubai, Sharjah, Abu Dhabi, Belarus, Macedonia and tickets from KLM to Amsterdam. And we are expecting more to come.”

The bazaar also offers Astana residents a chance to find souvenirs or special goods from all over the world. This year, The ATOM Project has also volunteered to commission from its famous Honorary Ambassador Karipbek Kuyukov a painting that will be sold at the bazaar with the proceeds to be also directed to charity.

“All embassies during this event promote their countries by selling their best authentic national products and special items that they bring especially from their countries for this event, so people in Kazakhstan can always find their perfect Christmas gifts or souvenirs from their favourite country at very reasonable prices. It is a special event where the people of Kazakhstan immerse themselves in the atmosphere of all cultures, see national costumes, taste delicious national food and buy souvenirs as though they visited 53 countries in one day. And at the same time, they’re doing good deeds, as all the proceeds go to charity,” said Osman.

All funds raised at the event go to support charitable projects in Kazakhstan, according to chair of the Charity Committee, spouse of Belarusian ambassador in Kazakhstan Yulia Nichkassova. Last year the raised funds totalled 27,171,461 tenge (US$80,481), while the ASA carried out 46 charitable projects in different parts of the country. The funds were sent to children’s homes, sanatoriums and special correctional boarding school for children with disabilities, and were spent on clothes, medicine, medical equipment, therapies, food and more.

Each year, the ASA receives numerous applications from organisations and individuals requesting help, but the assistance the ASA can offer depends on how much money they raise. Turning down requests is the hardest part of the job, Nichkassova said.

“It’s hard to say no to people; it puts a sort of guilt on us when we do,” she explained. “What saves us is the fact that it’s not an individual decision, it’s a decision based on the opinions of eight people – the members of the committee. So this responsibility is split up between us. Some projects start lengthy debates, sometimes we completely go different ways in our opinions. It’s a really good thing that the committee is comprised of the spouses of different ambassadors of different countries, cultures, faiths, life experiences and languages – that helps us make the best decision.”

“When we go through the letters we receive our, eyes often water, as we would like to be able to help all those who write to us. But unfortunately, we have to decide who will get the help right away and who will get it later. And this is the most challenging part about this job,” said Lyudmila Vassilenko, volunteer and member of the Charity Committee, hardly holding her tears back.

“One of my responsibilities, as a member of the Charity Committee, is to review the applications and decide where to direct funds,” she explained.

Vassilenko got involved in the organisation just recently, but says she felt she belonged to the cause from day one.

“Our family used to be regulars at the bazaar but I was always wondering how it was organised. Last summer, Heba offered a chance to become a member of the Charity Committee. Back then I thought it was impossible, as I was employed. I left my job and showed up at the first meeting and met with Yulia Nichkassova and decided to become a volunteer. I always wanted to be involved in charity and I feel that I belong here. This is my first step in this walk of life. This is a serious process – it’s not that simple,” Vassilenko noted.

“Each time the bazaar is finished, I say I will never do it again. But when September comes, we find the strength to start everything anew. I keep asking myself why? For me, first of all, it’s important to be part of this because it means goodwill and benevolence. It also helps us learn a lot about Kazakhstan – not superficially, but from inside. And most importantly, what we do here comes back later. When we visit the organisations and people we have helped, we receive lots of joy and good and we leave those places understanding that we have contributed something important and something very good. I also think we are doing this for our children. I believe what comes around goes around – if it doesn’t come around to us, it will to our children,” Nichkassova said with tears in her eyes.

All three say organising the bazaar is time-consuming and not everyone wants to be involved, but almost all help out one way or another.

“It is a lot of work. But when you turn back and see the result, see how many people support your event, see the smiles on people’s faces and all those who are volunteering, all the difficulties are gone,” said Osman. “All embassies help out. For instance, the spouse of the ambassador of Spain is not on our committee, but she alone has sold about 500 raffle tickets. That’s the kind of help that we need, too.”

The ASA is also organising an event called Basket Celebration, where each embassy prepares nice gifts and products from their country in a basket and donates them to the Charity Bazaar to be used as raffle prizes.

Bazaar visitors may also take part in the tombola lottery.

“It is an instant lottery and here I shall extend appreciation to Megumi, spouse of the ambassador of Japan, and Hitomi, spouse of the UN ambassador, for their outstanding assistance in preparing the tombola lottery,” Osman noted.