By Azamat Syzdykbayev in Astana on 21 November 2016 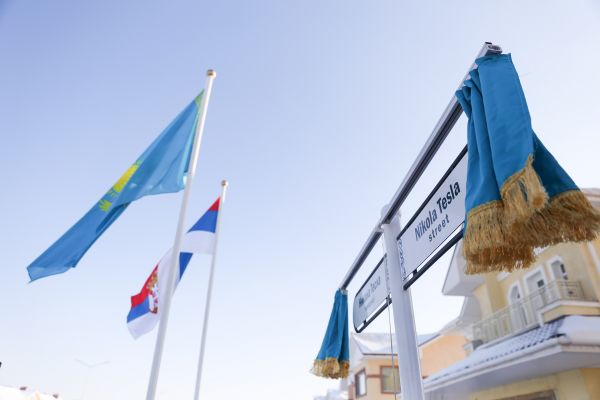 The street is near Family Village cottage town. The Serbian Prime Minister expressed his hope at the opening ceremony that the street will strengthen bilateral relations, noting that Kazakh President Nursultan Nazarbayev came to Belgrade this year to unveil a monument to well-known Kazakh poet Zhambyl Zhabayev.

“It is a great honour for me to be present at an historic event for Astana residents and Serbia citizens. During his first official visit to Serbia, Kazakh President Nursultan Nazarbayev personally unveiled the monument to poet Zhambyl Zhabayev,” Vučić said.

“The time has come today for me with a big pride to launch a street in Astana named in honour of one of the highest respected and famous Serbians both in Serbia and abroad. On behalf of Serbia’s government and the entire Serbian nation, I want to express appreciation to the leadership of Kazakhstan and in particular to President Nursultan Nazarbayev,” the Serbian Prime Minister said.

Issekeshev stressed that dedicating a street name to Nikola Tesla is a symbol of the two nations’ friendship.

“Recently, during the visit of our President to Serbia, a monument for Zhabayev was launched as well as a decision about one of the streets of Belgrade conferring the name ‘Kazakhstan’. Today, the name of famous Serbian scientist Nikola Tesla was given to one of the capital’s streets. I wanted to note that one of the central avenues pass here where EXPO 2017 exhibition will be held,” Astana Akim said.

The capital’s street receiving Tesla’s name was not the only occasion aimed at strengthening Kazakh-Serbian relations. A document to develop international and interregional economic ties, trade, economic and cultural cooperation was signed between Astana Akim and Siniša Mali, a Serbian economist and politician, and current Mayor of Belgrade.