Aktau and Kuryk Seaports Should Be Provided with Own Vessels

By Dmitry Lee in Business on 4 November 2016

ASTANA – The Aktau seaport and the new Kuryk ferry port must concentrate 35 percent of all traffic on the Caspian Sea, Minister for Investment and Development Zhenis Kassymbek said during a Nov. 1 government meeting on developing the transport and logistics potential. Power ferry infrastructure in the Caspian Sea will increase to 23 million tonnes, reported kapital.kz. 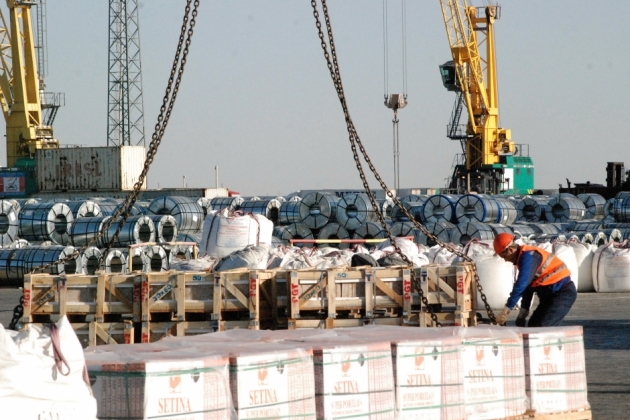 “Last year, we completed the construction of three dry cargo terminals in Aktau with the capacity of three million tonnes of cargo. A ferry complex is under construction in the port of Kuryk. In general, as a result of these ports the power of our ferry infrastructure will be increased to 23 million tonnes. In addition, two cargo ships will be launched this year. This is very important, because the amount of cargo that we form we have to take out by our own vessels and in Aktau there is a growth in trans-shipment of dry cargo. In particular, the volume of trans-shipment of metals increased in the current year by 25 percent and corn almost doubled,” he said.

Kassymbek added the Caspian nations worked tirelessly to build their own port facilities and today Aktau retains the leading position on the waterway. The city is a heavy loading port and occupies a 22-percent share of the total turnover in the Caspian Sea.

The procedure to register documents on the basis of a single window has radically changed. Paperwork has been reduced two and a-half times to a maximum of up to four hours per vessel. In addition, the average car traffic acceptance process is more than five times faster. Implementing these measures will allow cargo flows to increase through both ports by a total turnover to 35 percent in 2020.

“All the current projects and the measures to be taken in 2020 will increase the length of reconstructed roads up to 7,000 kilometres, which we are planning to maintain due to the fees for usage. The capacity of ports in the Caspian Sea will be increased to 23.5 million tonnes. We are planning to increase container transportation tenfold. Today, about 75,000 people work at the facilities as part of the Nurly Zhol programme. Next year, this figure will reach 100,000. We will adhere to this tendency,” said Kassymbek.

He also responded to a question from Prime Minister Bakytzhan Sagintayev as to why Kazakhstan slipped from 58th place to 63rd place this year in infrastructure quality rankings.

“Last year, despite the fact that there was more investment in the sector, there was a decline in the two indices. These two indicators are the quality of infrastructure of highways and seaports quality. This is a quite subjective result. It comes from a survey. In fact, according to other indicators that we have within the framework of the Commonwealth of Independent States (CIS), these indicators increased. I think that next year these figures will change,” he said.

Nonetheless, Sagintayev emphasised if these results were revealed after the survey, it is important to appropriately convey the information to the population.

“That means we are not keeping people up to date with the information on the work that we have carried out. They are not well informed. They might not use this infrastructure and think the quality is as poor as they are used to think,” he said.

Kassymbek admitted the situation is primarily influenced by the state of the local road network.