ASTANA – The United Nations (UN) has spread threads of assistance in various directions and projects in Kazakhstan and Central Asia. Today, there are 21 UN agencies with more than 300 staff members working throughout Kazakhstan, supporting and prioritising national reforms, economic diversification, transition to a green economy and promoting transparency and accountability as well as rule of law. It all started 23 years ago in a very small office in Almaty. 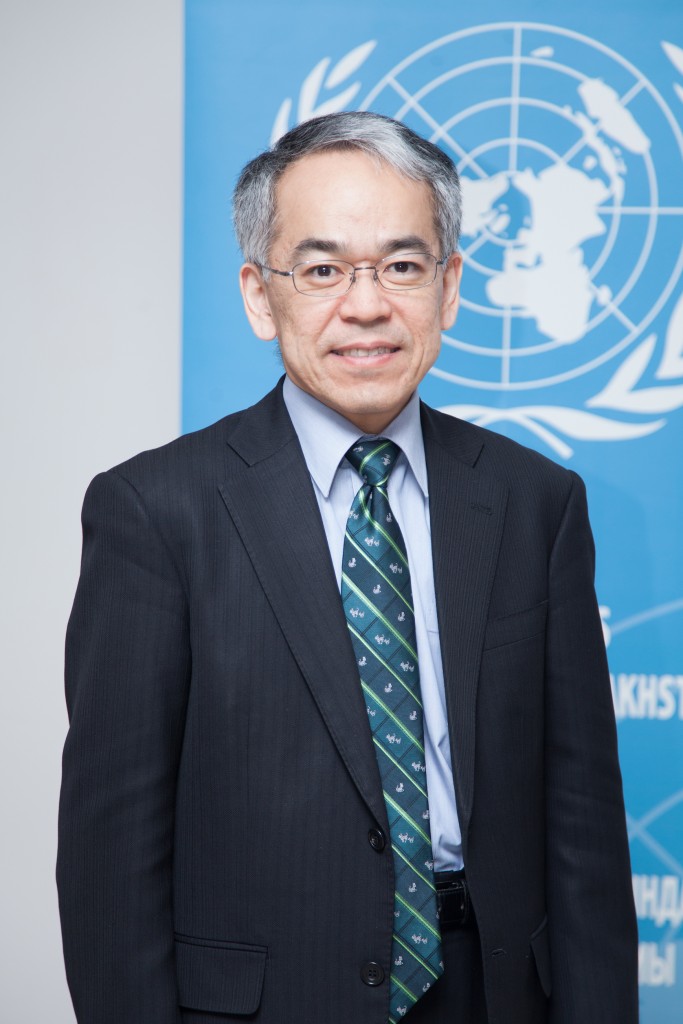 On the eve of celebrating UN Day on Oct. 24, The Astana Times interviewed UN Resident Coordinator in Kazakhstan Norimasa Shimomura.

Shimomura, who noted he was pleased to introduce the work of UN agencies just days before the worldwide celebration of UN Day, said the early years focused mainly on humanitarian assistance.

“The responsibilities of these agencies varied from human rights promotion and humanitarian coordination to development cooperation, with some of them having the mandate to provide assistance not only in Kazakhstan but also for the whole of Central Asia,” he said. “Today, the UN system in Kazakhstan has a strong and strategic partnership with the government and people of Kazakhstan. Our cooperation is outlined in the Partnership Framework for Development 2016-2020 that was approved by the government and UN agencies. Under this framework, the UN commits to focus on promoting inclusive and sustainable socio-economic development, good governance and rule of law and assist Kazakhstan’s effort to help other countries through international and regional cooperation. Together, UN agencies support Kazakhstan’s reform efforts to achieve the visions contained in Kazakhstan 2050 and other international and national priorities such as the five institutional reforms, Nurly Zhol and the 2030 Agenda for Sustainable Development as represented by the Sustainable Development Goals (SDGs).”

“It must be emphasised that UN development assistance is realised through a true partnership with the government and people of Kazakhstan – we make the best use of Kazakh experts when they are available, consult and empower the people to make decisions about their own future priorities and benefit from generous financial contributions of the government of Kazakhstan,” Shimomura said.

He noted he was especially pleased about certain areas of work.

“We are particularly proud – though there are numerous other achievements I wish I could share now – of the support we provided, for example, in drafting the National Development Strategy 2030; work in the Aral Sea region helping to address the pressing problems of rising poverty and health deterioration; socioeconomic rehabilitation of the communities around the former Semipalatinsk nuclear test site; our joint work with the government on Millennium Development Goals that led to notable progress in the area of child and maternal health and our effort to introduce new models of local development in the East Kazakhstan, Kyzylorda and Mangistau regions,” he said.

Shimomura underlined Kazakhstan’s development and its transition to become a donor of international development cooperation and humanitarian assistance, “as we have recently welcomed the news of establishing its Official Development Assistance (ODA) system with the UN’s assistance.”

“Paired with its commitment to international development, the country will serve as a non-permanent member of the UN Security Council from January, which I believe reflects the high expectations of the international community in Kazakhstan’s role,” he added

This year Kazakhstan marked the 25th anniversary of the closing of the infamous Semipalatinsk nuclear test site. Shimomura believes the will of the people and the President of Kazakhstan has propelled the country into the leading roles in establishing the nuclear-weapons-free zone in Central Asia and designating Aug. 29 as the International Day against Nuclear Tests.

“It is a great credit to President Nursultan Nazarbayev and the people of Kazakhstan that the test site was closed in 1991 and that the nuclear weapons left on Kazakh soil were dismantled and removed. Kazakhstan leads by example not only through adhering to its commitment to nuclear non-proliferation, but through agreeing to host a Low-Enriched Uranium (LEU) bank for peaceful and undisrupted use of nuclear energy. To my knowledge, this is the only one in the world that will operate under the auspices of the International Atomic Energy Agency (IAEA), a specialised agency of the UN,” he said.

“The country’s role in the international community has grown considerably and its efforts have been generally appreciated. In a matter of two decades, Kazakhstan turned itself into an active contributor to not only domestic but also regional and international peace and development. This is why I am quite excited to see that Kazakhstan will now serve in the UN Security Council over the next two years,” he said.

“Kazakhstan’s intellectual leadership in promoting peace through such an initiative is important considering that peace and security is one of the three pillars of the UN Charter and is closely linked to the other two pillars of human rights and development. Kazakhstan’s bold aspirations to end human atrocities and suffering laid out in the President’s initiative is meaningful in itself, but also because it is consistent with the vision for SDGs, especially its goal 16 that calls for the creation of peaceful and inclusive societies and reducing all forms of violence,” Shimomura said.

Shimomura admitted his love for the lovely and dynamic nature in Kazakhstan, highlighting the contrast between the “beautiful sites of modern cities and untouched nature in the remote areas.”

“I first visited Kazakhstan 20 years ago and I am amazed with the magnitude of development it has achieved over the past years. I am also impressed with the ability of the leadership and people here to assess not only the strengths but also the weaknesses. Kazakhstan has already reached a fairly high level of development and its ability to still recognise shortcomings creates the opportunity for the country to excel higher – which makes its membership in the Organisation for Economic Co-operation and Development(OECD) a realistic aspiration. This said, what really makes this country even more special is the hospitality of the people. I truly hope that we as the UN agencies can bring bigger smiles to each and every one of these people we work for,” he said.

UN Day marks the anniversary of the UN Charter entry into force in 1945.

“This day is devoted to promoting worldwide awareness of the aims and achievements of the UN and is traditionally marked by meetings, discussions and exhibitions exploring UN goals and successes. This year we will be holding a roundtable with partners at the Ministry of Foreign Affairs devoted to the launch of SDGs and Kazakhstan’s membership in the UN Security Council,” the UN Resident Coordinator said.

“UN Day is a day of every member-country and its people. So, I encourage everyone in this country to take this opportunity to learn more about the UN, Kazakhstan’s role in it and how you can contribute to realising the ambitious visions of the UN, including in achieving the SDGs. It is the day for everyone to celebrate,” he added.