By Kamila Zhumabayeva in People on 18 October 2016

ASTANA – Ilyas Tokhtarkhan is referred to as the “human calculator.” The 10-year-old boy from the capital struck the jury and audience of a Russian television show with his impressive mental math skills. 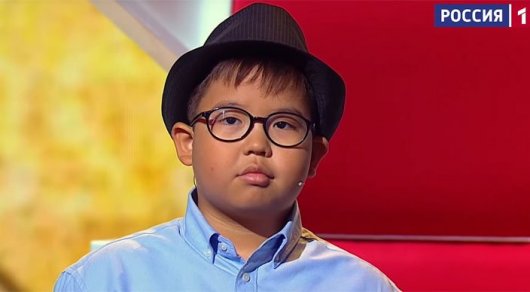 “I am called a human calculator because I do a mental arithmetic better than everyone. I can count two-digit, three-digit and four-digit numbers into several rows, multiply and divide two-digit and three-digit numbers and do square roots. I am proud of my maths skills and being a straight A student the most,” he said on Russia 1, reported Tengrinews.

Tokhtarkhan brilliantly coped with all three challenges on the channel’s “Udivitelniye Lyudi” (“Amazing People”) show. He first calculated two and three digit numbers in a few seconds, then squared two double-digit numbers and calculated the difference. The audience gave him a round of applause and the show is available on YouTube.

The boy has been training in mental arithmetic since he was six. Three years later, he finished an entire course by mastering all the skills and was among the first to complete the training at the centre, according to sputniknews.kz. He said he has won international contests for mental arithmetic in New Delhi with 12,000 participants from more than 50 countries.

Tokhtarkhan learned about the show from his father and sent his answers and a video to the organisers, who were impressed. Although he did not pass the finals in the end, he has not lost hope.

“It helps me when I go shopping, travel abroad or count currency rates. I dream of becoming an IT specialist so that I could create websites, 3D games and robots and get to know Photoshop. I need this project to show my mathematics abilities and impress everyone,” he said, according to Tengrinews.kz.

Tokhtarkhan is currently taking computer courses. He used to participate in dance performances at school, but gave them up due to his workload. He reads books, watches comedy shows and sometimes thinks about the meaning of life.

The mental arithmetic centre noted audiences can see performances by two other Kazakhs on “Udivitelniye Lyudi,” indicated sputniknews.kz. Bakhtiyar Baibusinov showed his skills Oct. 16 by conducting complex mental arithmetic while moving around the studio on a hoverboard, a self-balancing scooter. On Oct. 23, Maksim Sarukhanov will memorise a colourful matrix made of more than a hundred balls and try to play the picture back in two minutes.