Shimon Peres in Our Memory

By Kassym-Jomart Tokayev in Op-Ed on 1 October 2016

This week the whole world has come together to pay its last tribute to Shimon Peres, a patriarch of world politics, the Nobel Peace Prize laureate, one of founders of Israel, and a friend of Kazakhstan. 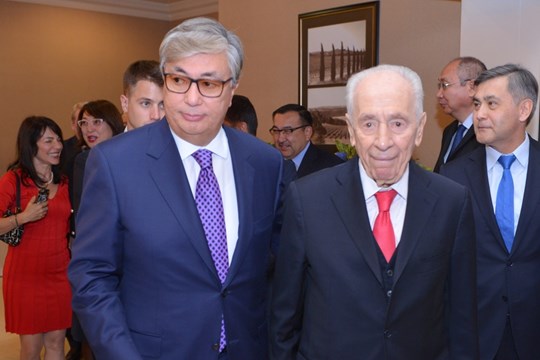 At such moments, we say, “A whole epoch is gone”, because the life of Shimon Peres in itself mirrors the history of the evolution of the State of Israel. He took part in the struggle for the independence of the Jewish state and was a valuable fellow to Israel’s first Prime Minister David Ben-Gurion. During his long political career, he held almost all ministerial posts, was Prime Minister of his country two times and was elected President at the age of 84.

The rich political heritage of Shimon Peres transcends far beyond the State of Israel. He embodied the profound belief in peaceful coexistence of the peoples in the Middle East and represented a progressive trend in international relations.

Over the past 25 years, Peres was an active promoter of the strong partnership between Israel and Kazakhstan. He had very warm, friendly relations with President Nursultan Nazarbayev, personally supporting his regional and global initiatives.

Peres’ first visit to Kazakhstan in September 1995, as Foreign Minister, laid the foundation for a long-term bilateral cooperation. Commending Nazarbayev’s political wisdom and flexibility, with a fair amount of humour, Peres said, “If I were in your place, waking up once, I would have opened my right eye and saw China, would open my left eye and saw Russia. Then I would say: “God, what have you done with me!”

He went on to outline his unique approach to building peace and common understanding between those who have previously been locked in long-standing conflict:

“During the war all depends on victory; at times of peace we need compromise. People love peace, but do not want to compromise.

“Territory is a challenge of the present time.

“Ideas and technologies have no nationality and do not belong to any state. They can pass through the border without paying taxes and duties.

“There is a joint venture between God and the earth. However, it turned out that one of the partners couldn’t be relied upon. There is something unimaginable happening up there. So we – the Jews – have focused on human potential.

“When we have established relationships with Russia, the first thing we did was to buy a cow in Russia, which later became four times as much to produce milk. The system is the core thing here. Sometimes a system produces more milk than a cow. Your riches are under the ground, but it is necessary to make efforts to develop the system.

“It is better to win in the peace, than to lose the election. Peace is an apple, not a tomato. Apple is durable and strong, tomato is short-lived and mild.

“Politicians are like watchmakers. But if watchmaker stops the clock to repair them, a politician has no right to stop the time.

“Kazakhstan will be a surprise of this century.

“In countries where there is a lot of earthquakes, there are two ways to build a building: put the foundations deep in the ground or use the system of balances. For Kazakhstan, it is better to use the balancing policy.

“Socialism has created a surprising contradiction. It is a contradiction between the system and the people. How could such an interesting system make such a number of true intellectuals?

“Bosnia is located in the heart of Europe. The agony continues; there is no end to it. The world is fragile; the UN demonstrates weaknesses. We have our Bosnia. We conquered the west bank of the Jordan River, but then conceded it. We have done so not because we are weak. Jews are 4000 years old. We never ruled other peoples, but other peoples dominated over us.”

“If we implement all UN resolutions, then a state like Israel would simply not exist.”

“There were 110 rivers in the former Soviet Union, and only one in Israel, it belongs to two countries. There are two lakes in Israel and one of them is Dead.”

“It is difficult to say, how to conduct a policy in Kazakhstan. Genghis Khan, Peter the Great and Stalin prevailed above you. In your place, I would have gone into a depression. Therefore I respect you.”

In 1994, along with the then Israeli Prime Minister Yitzhak Rabin and the Palestinian Liberation Organization leader Yasser Arafat, Peres received the Nobel Peace Prize for the development and signing of the Oslo Peace Accords.

Peres was convinced that the concept of peace in the Middle East could not be restricted purely to military and political initiatives. His speech at the second Summit of the Conference on Interaction and Confidence Building Measures in Asia (CICA) in Almaty in June 2006 was very astute in this respect. In the presence of Asian leaders, including many Arab states, Shimon Peres set out his vision of achieving peace in the Middle East, saying, “Palestinian people are entitled to have a state on the side of the State of Israel with equal rights, respect and good economy. And from my standpoint the better Palestinians have it, the better neighbour we shall have. And to build a good neighbourhood is a right thing to do.”

In many ways, Peres was drawing on lessons from the painful peace process of the 1990s: “Unfortunately, the closer we come to peace, the shortage of steam to make it is becoming evident. The distance is short, but the speed is slow and we have to try and think and add energy to introduce a real, durable and just peace.”

Peres also contributed to the economic dimension of relations with the Palestinians through the establishment of joint projects in partnership with Jordan and other international institutions.

At the CICA summit, he also raised the environmental issues that affect the whole region: “We have, just like Kazakhstan, a problem with a lake, which is losing its waters. And if we do not compensate it for the lake, it may well become an ecological catastrophe. We cannot save the lake, unless the three of us [Israel, Palestine and Jordan] act together. We have to bring water to the lake from the Read Sea to the Dead Sea. We can develop excellent tourism there.”

As President of Israel, Shimon Peres participated in the 3rd Congress of the Leaders of World and Traditional Religions in Astana in July 2009 and again issued a new invitation to some of the leaders of the Muslim world to engage in dialogue: “[F]rom this rostrum, with your permission, Mr. President, I appeal to the King of Saudi Arabia, King Abdullah bin Abdul Aziz Al Saud, the initiator of the Arab Peace Program. I appeal to meet in Jerusalem, or Riyadh, or come to Kazakhstan, together with other leaders of Arab countries to implement your idea, your vision and the vision of all believers of our common God of peace and justice.”

Through his work, Peres raised the profile of the President of the State of Israel, which had previously been badly tarnished following the resignation of his predecessor.

In 2008, Shimon Peres convened a major international conference entitled “Facing Tomorrow” to mark the 60th anniversary of the State of Israel. On behalf of our President Kazakhstan was represented by a parliamentary delegation. Despite the busy schedule of bilateral meetings and an abundance of other events, 85-year-old President Shimon Peres led a very spirited conversation with me as the head of the delegation, demonstrating an amazing memory and inherent wisdom on world affairs. He praised the work of the President of Kazakhstan in building a successful state and in the promotion of important international initiatives, stressing that Israel will continue to support the CICA and the Congresses of the Leaders of World and Traditional Religions.

After leaving the Presidency in 2014, Peres continued to live an active political and social life, including at an international level.

The last time I had a chance to meet him and exchange views on the situation in Syria was in Astana in September 2015. Peres led the “Group of Eminent Persons” who came to meet President Nazarbayev. As before, this giant of world politics displayed remarkable wisdom, affirming the popular characteristic of a “mega-brain.”

Despite his venerable age of 93 years old, his departure was very sudden for everyone.

“In the memory of the people of Kazakhstan Shimon Peres will always remain as a visionary leader, a historically significant person and respected politician, who made a great contribution to the improvement of our bilateral relations,” said President Nursultan Nazarbayev in his condolence message.

Shimon Peres has entered the world history as a great statesman, a true patriot of the State of Israel, and a consistent supporter of policies aimed at achieving peace.

The author is Chairman of the Senate of the Parliament of Kazakhstan.