By Malika Orazgaliyeva in Culture on 21 October 2016

In a recent interview with Kazakhstanskaya Pravda newspaper, legend of Kazakh pop music Lucky Kesoglu said that he has three motherlands, but only one love. 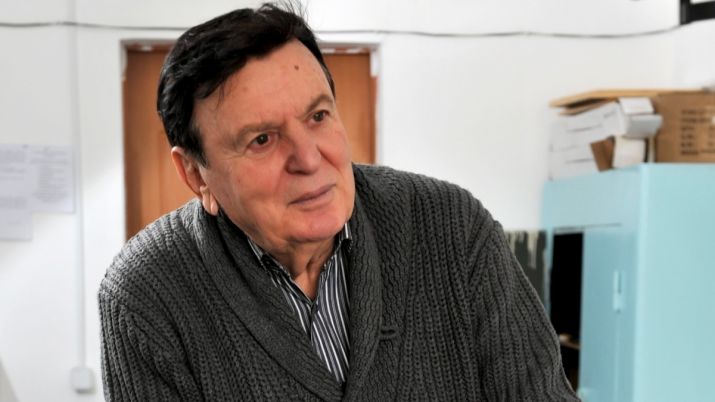 Kesoglu was born in the Georgian city of Batumi in 1939. His ancestors are from Greece. However, he considers Kazakhstan his true motherland. In his words, this is where he grew up as a person and an artist, and this is where he does his favourite job.

Today, the national artist and Kazakh State Prize laureate chairs the Department of Popular Music he established in 2010 in the Zhurgenov National Academy of Arts in Almaty. As for his own art, his pace has calmed down recently, but the singer has not abandoned the stage.

What is the secret of your artistic longevity? Do you do daily exercises?

There is a concept of being a professional. Going on stage, a professional does not think whether he can or cannot hit a note, because he already knows everything about his voice. And this is true of all genres. In contrast to opera, pop music does not require gruelling daily exercises to maintain one’s singing tone, but considering that I work with students, I exercise constantly. If, however, I expect to be recorded – which happens now less and less – I check my voice with an instrument.

In general, the voice is a God-given tool. For some, it serves a long time; for others, short. The only way to keep it as long as possible is to follow the rules. But this doesn’t apply to me; the youth should not take me as an example, because I do the opposite [of what’s recommended]. No wonder my colleagues say that I have iron throat. I drink cold water, eat very spicy food and don’t suffer from throat diseases like angina, laryngitis, pharyngitis. I think that, in addition to my genes, this is also a result of my annual trips to the sea. Swimming there, I always rinse my throat with seawater. However, when I decided to do the same in Cyprus, it felt like there was a stone in my throat for two days. The Mediterranean is too salty.

Did being the son of a repressed Greek affect your musical life?

It severely affected the life of our family, but not my career. I was 10 years old, when all of us were thrown from the train that had carried the deported Greeks at the station in Timur Shauldersky (now Kyzylkum) district in South Kazakhstan. We were housed in squalid huts somewhere on a collective farm. The first thing our parents did was begin to cry.

Later, we were allowed to move to a more comfortable place. My father, an artisan, was able to find a job in Turkestan. When in 1961 the Greeks were rehabilitated, my parents returned to the Caucasus. I had already studied in Shymkent, so I visited them for short periods. Then there was the conservatory, career, marriage …

It is hard to explain why, but the desire to become a singer appeared in those years when our family lived in Turkestan. I ran to the radio as soon as music programmes started, I never missed a musical film in the local cinema. I went on stage for the first time in school – or rather, I was pushed there by my classmates during a New Year’s party. I sang a song by Dunayevsky, “Ne zabyvai,” [“Do Not Forget”] and was accompanied by our biologist, who had the beautiful surname Bryunelli.

Then one thing led to another. Four years in a college, five years at the conservatory, cooperation with the Pop and Symphonic Orchestra of Kazakh Radio. I went there personally for an audition in front of chief conductor Vasily Lisitsa. He treated me kindly, and my active artistic life started in the orchestra. Then I performed on television for the first time. In 1972, I became a Kazakh television and radio soloist and worked there for 26 years.

And then you had a cloudless artistic life, right?

By nature, I do not like conflict. I never envied anyone, but people envied me, though I did not pay attention to it. Maybe I was too self-confident in my skills and abilities, but I always felt sorry for those people. I cooperated with all the composers in Kazakhstan who wrote songs.

Today, I have recorded about 300 songs. I understand when people of my age come up to me, but once a 35-year-old guy came up to say how much he loves my songs. This happens often. It means that I have lived not in vain.

The singers of your generation have such distinct voices; they are instantly recognisable by their timbre. Why are modern singers so unrecognisable?

I also cannot distinguish them from each other, because they all sing in a kind of, I would say, zombie style. At the same time, I can confidently say that we do have many good singers, but after they graduate from the Academy, they disappear somewhere due to a lack of financial support.

Now, if a person has appeared several times on television, has won the hearts of his district or city, he is already called a star. I consider real stars only Roza Rymbayeva and Nagima Yeskaliyeva, who once won over the entire Soviet Union. Young singers cannot reach a higher level, although they try. Once again, it is related to money. Today there is no significant international competition because their organisation is very expensive. The Academy of Arts sends its students to the existing contests, they win different honours there, but if only one producer expressed a desire to promote a talented but penniless singer!

Did you have many chances to make a career outside of Kazakhstan?

I participated in the Soviet Union’s Fourth Competition of Pop Music Artists. Famous Russian singer Lev Leshchenko, who at the time was on the rise, won the first prize, and I won another award. Then I was offered a job at the Moscow Music Hall. However, I did not even consider the offer. I have always loved my city. Besides, in the early 1970s I often visited Moscow; I had seven or eight performances a year there. I knew and had contacts with many Russian composers, including Yevgeny Martynov, Vladimir Shainskiy, Yury Saulsky. Shainskiy used to say that I was the best performer of his “Bereza Belaya” [“White Birch”]. Saulsky once said to me, “Lucky, I wish you lived here; you would be the first to receive our songs.”

Many Greeks from Kazakhstan, including your children, have moved to their historic homeland. Have you ever had such a thought?

I am often asked this question, but I love the country I live in. If I went to Greece, I would not be able to make new friends or a new career. I would be nostalgic.

In Kazakhstan, I have been doing things I love. My friends and fans live in this country. Here, I am an appreciated and respected person and I try to be useful.