By Malika Orazgaliyeva in International on 5 October 2016

ASTANA – Kazakh President Nursultan Nazarbayev and Russian President Vladimir Putin discussed bilateral cooperation, regional and global issues on the sidelines of the Oct. 4 13th Forum of Interregional Cooperation between Kazakhstan and Russia, according to the press service of the Akorda.  The forum was held under the theme “Development of the transport and logistics potential of the Eurasian space.” 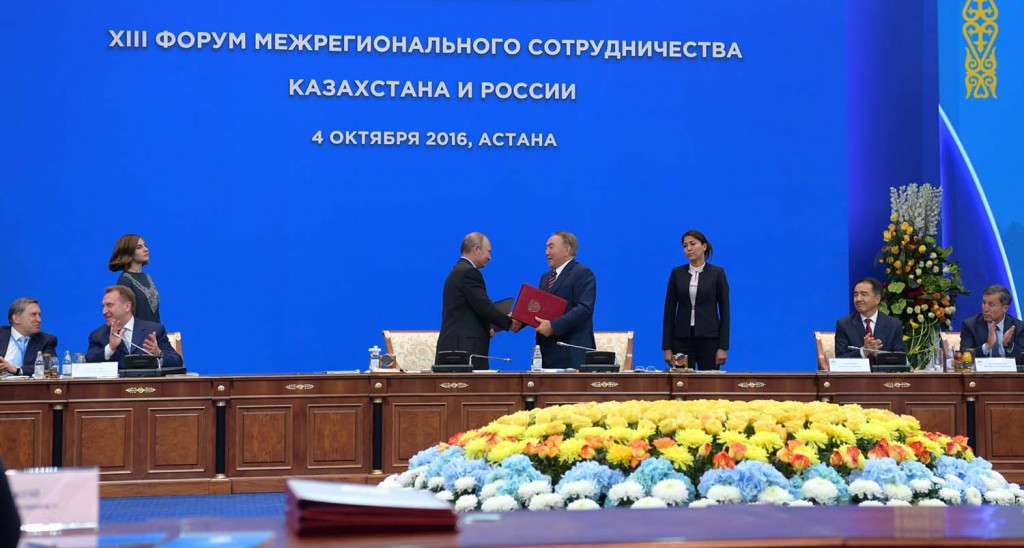 “The governments of our states have worked well in order to implement the agreements reached at the previous forum in Sochi. Today, the forum will bring together 900 businessmen from the two countries. We have already reached certain agreements as the result of negotiations between the heads of neighbouring regions of Kazakhstan and Russia. All of this evidences our high-level of bilateral relations,” Nazarbayev said.

Putin expressed gratitude for the warm reception and noted the two states are strategic partners.

“We interact in almost all areas. At this interregional forum organised on your initiative, Russia is represented by 400 businessmen, who work directly with Kazakhstan. The theme of the forum is important and useful for the development of transport and logistics infrastructure in our region,” Putin noted. 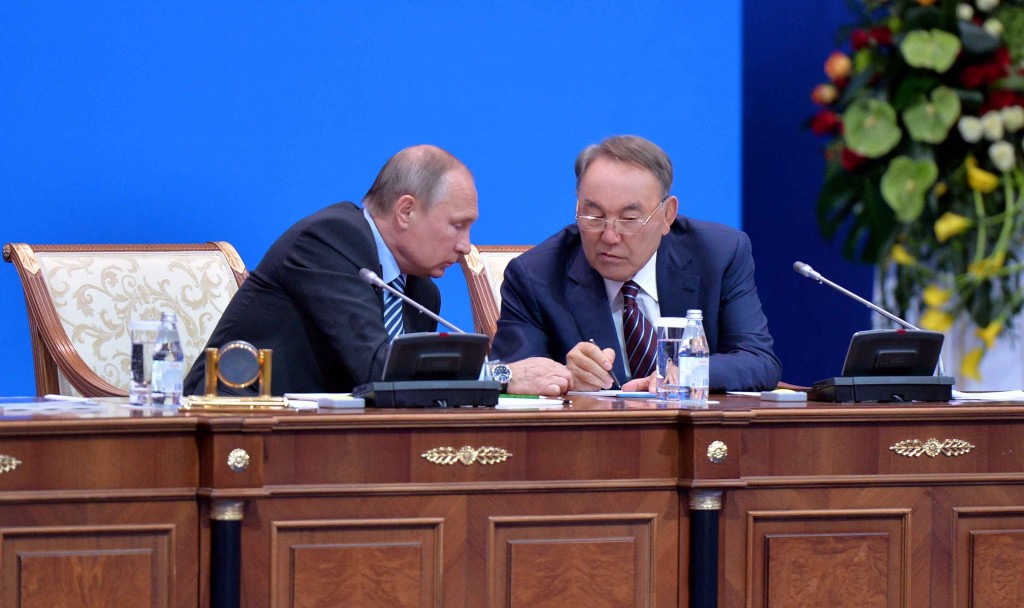 More than 1,300 representatives of Russian and Kazakh government agencies, quasi-public sector and business circles attended the forum to discuss expanding trade and investment.

Nazarbayev told the forum that Russia is an important strategic, trade and economic partner of Kazakhstan.

“This forum contributes to the continuation of our mutually beneficial wide range business cooperation. The volume of bilateral trade in the first half of this year amounted to nearly $6 billion. At the same time, this index declined by 30 percent in comparison with the pre-crisis period. In many ways, such dynamics are associated with a number of global external circumstances,” Nazarbayev noted.

“There are more than six thousand joint ventures operating in Kazakhstan. A large number of bilateral investment projects are being implemented. In particular, the petrochemical, mining and metallurgical complex. At the moment, we have more than 60 projects worth $20 billion, the promotion of which will be supported,” he informed. 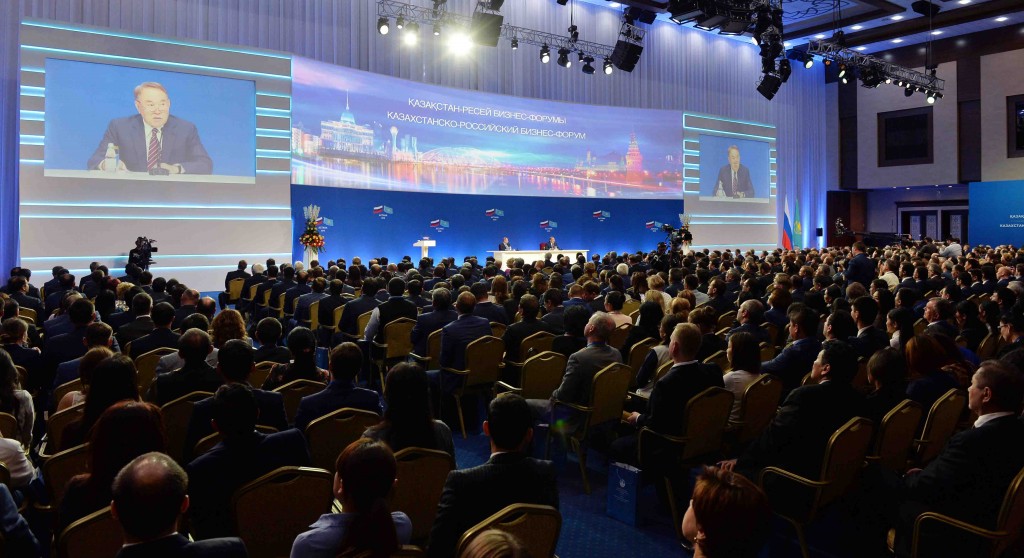 Nazarbayev also pointed out the considerable potential for cooperation expansion.

“We are working within the framework of the Eurasian Economic Union (EAEU). A free trade agreement was concluded with Vietnam. There are similar talks held with China, South Korea and Singapore. Countries like India, Egypt, Iran, the Association of Southeast Asian Nations (ASEAN) member states and others intend to develop cooperation with EAEU. We purposefully form the common rules of the game, which are clear to all producers and investors. By investing into Kazakhstan’s economy, Russian business will be in almost ‘home’ conditions for itself. The mutual interest of our countries lies in the creation of powerful transport and logistics infrastructure between Europe and Asia,” he underlined.

Nazarbayev drew attention to Kazakhstan’s efforts to improve the investment climate and diversify the economy.

He talked about Kazakhstan’s economy modernisation, including tax regime liberalisation, implementation of the next phase of the large-scale privatisation and creation of two innovative clusters in Astana and Almaty. 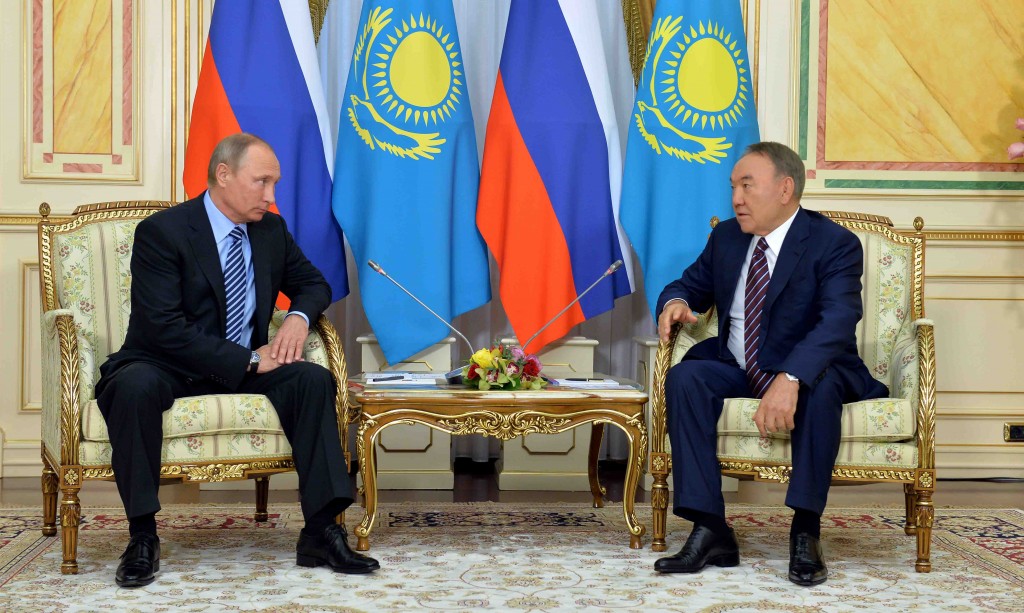 In addition, Nazarbayev reminded about the creation of the Astana International Financial Centre and holding EXPO 2017 in the Kazakh capital.

More than 30 bilateral agreements on projects in priority sectors, such as food, chemistry, metallurgy, innovations, mechanical engineering, pharmaceutics and production of construction materials were signed.