By Zhanna Shayakhmetova in International on 10 October 2016

ASTANA – The protocol to extend the main directions in economic and trade cooperation between Kazakhstan and Uzbekistan was signed by the Kazakh delegation headed by First Deputy Prime Minister Askar Mamin during the Sept. 22-23 working visit to Tashkent. 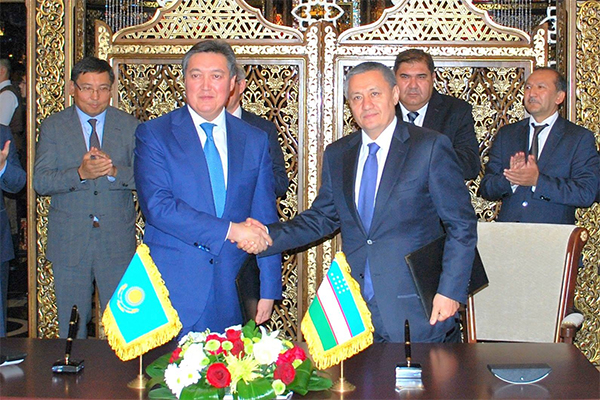 The trade turnover between the countries amounted to $3 billion in 2015. During the meetings in Tashkent, the parties discussed the current state of bilateral trade and economic relations, strengthening dealings in the field of industrial partnership, the transport sector and prospects for future development as the states have great potential for expanding trade and economic ties, according to Primeminister.kz.

“The negative trend in the trade turnover between our countries needs to change with joint efforts. We, indeed, have unrealised potential. We need to increase the turnover almost twice, bringing it to $5 billion in the medium term,” Uzbek acting President Shavkat Mirziyoyev told Mamin during the meeting.

He expressed gratitude to Kazakh President Nursultan Nazarbayev on his own behalf and that of the Uzbek people.

“Nursultan Nazarbayev stayed with us, the Uzbek people, in difficult times. We are grateful for this. Kazakh people are our trustful, sincere and close friends,” said Mirziyoyev referring to the Kazakh President’s recent visit to Samarkand to pay respects to the late President of Uzbekistan, Islam Karimov.

“We see great prospects for cooperation in economic and trade spheres, especially in the field of agriculture, mechanical engineering, the transport and logistics sector, energy and other sectors,” said Mamin. 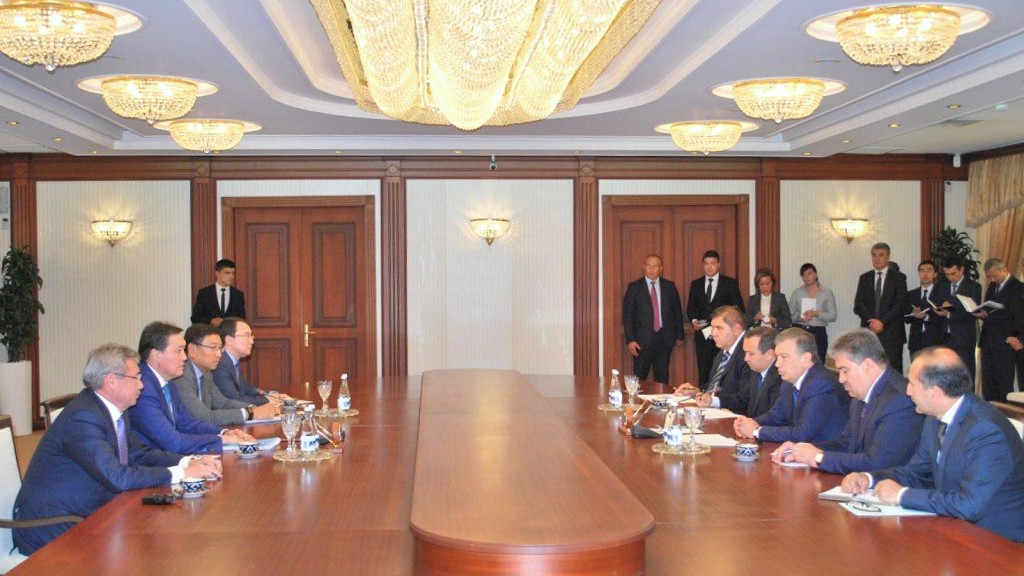 The agreement was reached to increase the export of agricultural products (grain and flour from Kazakhstan to Uzbekistan), set favourable tariff conditions on cargo traffic, offer mutual discounts for railway transportation and launch container trains carrying fruits and vegetables from Uzbekistan to Kazakhstan. This is expected to improve the competitiveness of regional transport corridors and ensure high capacity transit.

Azimov noted it is essential to increase supplies of flour and oil products from Kazakhstan, as Uzbekistan is a reliable buyer.

An agreement was also reached to develop interregional cooperation, set up joint trade houses as the guarantors of providing mutual supplies in agriculture, petrochemicals, pharmaceuticals and chemicals, improve customs cooperation on information and organise joint business forums and visits.

“The creation of trade houses as joint ventures with the head office in Astana or Almaty meets our mutual needs,” said Azimov.

Mamin noted the necessity to open markets for mutual investments between the countries and establish close contacts between business circles and real sector enterprises.

Kazakh-Uzbek relations are characterised by relatively high dynamics, said high-profile political analyst and Kazakhstan Institute for Strategic Studies Director Yerlan Karin. Bilateral meetings are held on a regular basis and at different levels. Nazarbayev’s visit during Eid al-Adha on Sept. 12, his visit to the grave of Uzbekistan’s first president Islam Karimov in Samarkand and negotiations with Mirziyoyev demonstrate the special relationship between the countries, he said.

“The Kazakh President has always attached and attaches great importance to cooperation with Uzbekistan, highlighting the special nature of the close relationship between the two countries. The visit of Kazakh First Deputy Prime Minister Askar Mamin to Tashkent proves this, because this visit took place immediately after the working visit of Nursultan Nazarbayev to Uzbekistan. Astana demonstrates its readiness to start the implementation of the agreements as Mamin is responsible for the government issues of regional cooperation and economic integration,” said Karin.

“In this case, the purpose of the visit was to discuss concrete mechanisms of realisation of the reached agreements and specific arrangements. Adoption of the protocol on the extension of the major issues of trade and economic cooperation is a working document. Both sides showed the intention thereby to further deepen the relationship between the two countries,” he added.

In another sign of the rapidly evolving ties between the two regional neighbours, on Oct. 8, Prime Minister Bakytzhan Sagintayev met in Astana with Deputy Prime Minister of Uzbekistan, Ulugbek Rozukukov, to discuss further expansion of bilateral economic cooperation.

And in yet another new development, Nazarbayev spoke on the phone with Mirziyoyev on Oct. 10. The two discussed issues of mutual cooperation, as well as the implementation of the high-level agreements. According to the Akorda, the two leaders stressed the positive results of the recent intergovernmental contacts and noted the importance of further improvement of bilateral relations in various priority areas.