By Anuar Abdrakhmanov in Sports on 15 October 2016

ASTANA – Kazakhstan secured its second point in the FIFA World Cup 2018 qualifiers Oct. 11 in Astana after playing to a goalless draw with Romania. 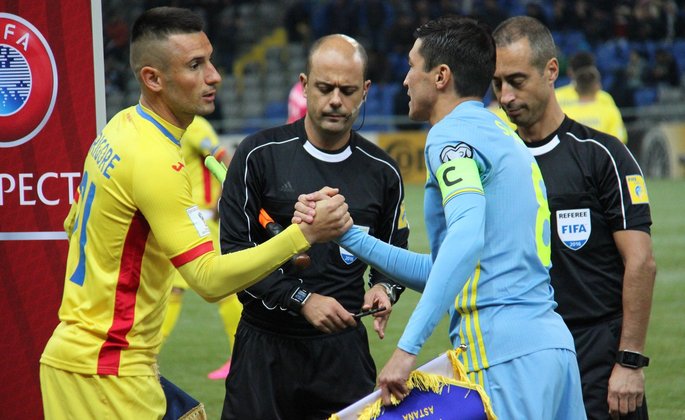 Three days before the match, the Kazakh players suffered a humiliating away defeat at the hands of Montenegro 0:5. They were motivated to win back the trust and support of their fans in a home game.

The task was complicated by the fact that in Astana the team could not count on one of its leaders, Bauyrzhan Islamkhan, who missed the match due to two yellow cards picked up in previous games. The Romanian team were favourites to win as they played last summer at Euro 2016 in France. Also, in the last round they defeated Armenia in Yerevan 5:0. So in Astana they also hoped to quietly get their three points.

Logically, it was the Romanians who created the first threatening moment in the match. Bogdan Stancu shot from a distance, but the ball went just a little above the target. The home team responded with a good attack of its own, but Sergey Khizhnichenko missed his chance.

Gradually the play on the field started turning tough and at times ugly. The visitors had to make two forced substitutes due to injuries. Before leaving on a break, the Romanians twice tested Kazakhstan’s goalkeeper Stas Pokatilov, but both times the ball passed just over the bar.

The second half turned even more contested. Kazakhs first troubled the opponents’ goalkeeper through strikes from Samat Smakov and Islambek Kuat. The guests played with a bit more quality and in one episode only Pokatilov saved the team from a goal after Adrian Popa’s strike. Once again the Kazakh goalkeeper came into the game at the 87th minute when he stopped a Romanian striker from converting the ball into an empty net. As a result, the game ended 0:0 and Kazakhstan earned its second point in the current qualification campaign.

The match with Romania was the last for Team Kazakhstan’s most experienced player and its long-time captain Smakov. The 37-year-old played 75 matches for the national team since 2000, which is a national record.

“I thought about this for a long time and finally took the decision to finish. As time goes by, all footballers sooner or later complete their careers. My turn came to stop playing for the national team. Now is the time for me. This was the last home game for the national team in 2016, so it was the match with Romania when I bid farewell to Team Kazakhstan’s fans. It is a pity we did not win the game as we strived for a victory. To my mind, in this game we lost two points rather than gained one,” said Smakov.

“It was a day when all fans that were saddened by what happened in Montenegro united around the team. It passed on to the boys. Today was our day. But I told them that as long as they do not win such games, we will not grow. We need to win such games! That’s what I told the guys,” Team Kazakhstan’s Manager Talgat Baisufinov commented.

Kazakhstan’s next match will be played Nov. 11 in Denmark.